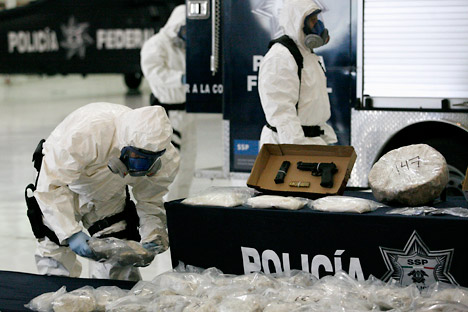 Up to 100,000 people die in Russia from drug overdoses and other drug-related causes every year. Source: Reuters

Illegal drugs have become a top security threat to Russia that is also seriously affecting its demography.

The United Nations says 75 tons of heroin reaches Russia annually, with most of it originating in Afghanistan and being trafficked along the so-called Northern Route, which spans the Central Asian republics of Tajikistan, Kyrgyzstan, Turkmenistan, and Kazakhstan.

Although the figure comes straight from the United Nations Office on Drugs and Crime, which since 2010 has been headed by Yury Fedotov, a Russian career diplomat who previously served as Russia's ambassador to Britain, Ivanov says the figure is hard to believe.

A day after a major drug bust on a Moscow-bound train, the top anti-drugs official says UN statistics on drug use are unbelievably high.

"Seventy-five tons would mean that everybody in Russia, including children and the elderly, was injecting heroin on a daily basis," Ivanov, who heads the Federal Drug Control Service, said in a May 17 interview on Ekho Moskvy radio.

Other Russian experts have estimated total heroin consumption figure at 10 tons a year.

But there is one fact that no one contests: Illegal drugs have become a top security threat to Russia that is also seriously affecting its demography. The presidential Security Council lists illegal drugs as one of the three main security challenges, alongside terrorism and illegal migration.

To address this, Russian authorities are ramping up efforts to curb an influx of narcotics from Afghanistan as U.S. forces prepare to withdraw, and they will host a major international drug enforcement conference in Moscow next week.

The problem is all too evident. Ivanov made his comments a day after Federal Security Service officers found a hidden compartment containing 45 plastic bottles of what appeared to be Afghan-produced heroin aboard a train traveling from the Tajik capital, Dushanbe, to Moscow.

The bust exposed what experts say is a tiny fraction of a well-developed route that brings deadly drugs to some 1.7 million opiate users in Russia.

Up to 100,000 people die in Russia from drug overdoses and other drug-related causes every year, according to the U.S. State Department.

Ivanov himself is one of the main tools in the Kremlin's arsenal to fight drugs. A close ally of President Vladimir Putin, he served alongside Putin as the chief of staff of the St. Petersburg Mayor's Office back in 1994 when Putin was first deputy head of the city's administration.

But his differences of opinion on illegal drugs data go beyond the figures on heroin. His drug control service also has denied that there is any transit of heroin via Russia to other European countries, while according to the Interpol, at least some of it carries on via the Baltic states and Ukraine to other parts of Europe.

In order for the drug control service to get its own reliable source of analysis, the agency recently established its own research center, designed to provide analytical and intellectual support to Russia's fight against drug abuse.

Its head, Ilnur Batyrshin, said the increased production of opiates in Afghanistan is a key problem.

"The main challenge is to eradicate production in Afghanistan. Drug trafficking is only a symptom and a consequence of this greater problem," Batyrshin said in an interview.

Russia, however, cannot fight drug production in Afghanistan by itself because it has not had a military presence in the country since the 1980s, and thus has to rely on the U.S.-led military operation, which is about to shift from combat to support mode, with less than 20,000 troops to remain.

Unlike Russia, heroin is brought to the U.S. from a wide array of sources, with Afghanistan occupying only 5 to 6 percent of the market, according to estimates by the U.S. Drug Enforcement Administration. Therefore, the U.S. naturally has less incentives to fight the Afghan drug threat that Russia faces.

In addition, according to Irina Komissina, senior researcher at the Russian Institute for Strategic Studies, the U.S. exploits the heroin issue in order to compete with Russia as a political power in Central Asia.

Nevertheless, both the Russian and U.S. sides have shown a clear interest in stepping up cooperation on drug control in Afghanistan and elsewhere in recent months, according to a recent report published by the EastWest Institute with Yekaterina Stepanova as its principal author.

According to the report, the U.S. suffers from money laundering that, in turn, fuels transnational crime, even though it is not directly affected by the inflow of Afghan heroin. In addition, narcotrafficking is directly linked to corruption and dysfunctional governance that contributes to the proliferation of violence in Afghanistan and the wider Central Asia.

A drug control service representative confirmed earlier this year that Russia and U.S. cooperation on counter-narcotics is currently "on the rise," telling Kommersant FM radio on Jan. 30 that officials from the drug control service and U.S. Drug Enforcement Administration engage nearly every month.

At the same time, Russia has developed its own initiatives to alleviate the situation in Central Asia, which currently serves as a hub for opiates coming from Afghanistan. Some analysts estimate that 30 percent of Tajikistan's gross domestic product is drug-related, while the rest of the region is also economically addicted to drug proceeds.

The problem was further aggravated by the establishment of the Customs Union of Belarus, Kazakhstan and Russia that removed all custom borders between these states. Thus, Russia now relies on Kazakhstan in controlling its border with the rest of Central Asia, a factor many analysts believe drug traffickers can exploit.

Drug money is also believed to be fueling abnormally high property prices in Dushanbe and the provinces, according to the Eurasianet.org website.

Russia has tried to make those countries' economic development follow a more conventional path. On April 17, a Russian government commission agreed to establish a state corporation for the development of Central Asia in order to turn locals away from drug smuggling by developing economic projects in Central Asia.

According to anti-drugs chief Ivanov, the new project will require 2 billion rubles ($63.9 million) in starting capital invested into energy, natural resource and water projects and take part in training personnel in Central Asian countries, the main source of immigration to Russia.

Batyrshin's research center has actively participated in promoting the projects. "Along with law enforcement measures, economic development in Central Asia is an essential part in resolving the drug trafficking problem in this region," he said. "This fully corresponds to accepted international approaches and the concept of 'alternative development.'"

In addition, Russia will make all visitors from the CIS apart from Belarus and Kazakhstan present their foreign passports when traveling to Russia. Currently, they are allowed to come with their domestic passports, which makes their moves difficult to control.

Other governments also have started initiatives, such as the EU-financed Border Management in Central Asia program and the U.S.-led Central Asia Counternarcotics Initiative.

Russian officials have been reluctant to accept these programs. "It is unclear why the U.S. is pursuing these projects when they can fight the cause of the issue by stopping the multifold increase in poppy cultivation in Afghanistan," Batyrshin said.

This situation only exemplifies the widely held belief in Russia that the U.S. is trying to boost its influence in Central Asia by using the heroin problem as a pretext.

On June 5-7, Moscow will host the leaders of anti-drugs agencies from more than 120 countries at the International Drug Enforcement Conference, the biggest such forum in the world. The event promises to offer Russia, the U.S. and other countries with a new opportunity to develop their counternarcotics initiatives in cooperation rather than in parallel with each other.