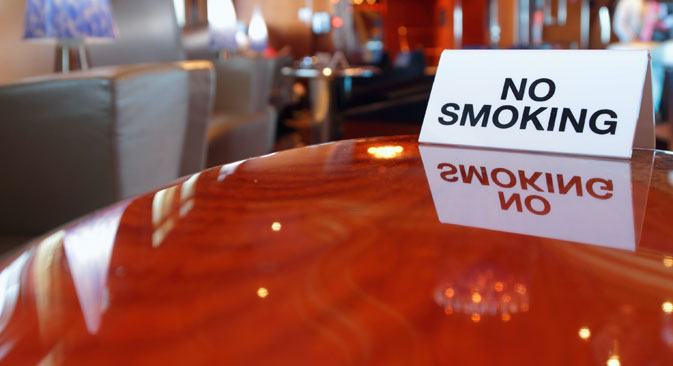 Over 75 percent men, about 30 percent women and over 40 percent children and teenagers smoke in Russia. Source: Lori / Legion Media

Russia has launched a war against smokers: they are not allowed any longer to smoke in public places.

The authorities hope to cut by the newly introduced measures the rate of diseases and deaths caused by the bad habit. On the other hand, those addicted to the habit insist on the right to have a bat, thought even they consider as reasonable certain provisions of the new law.

On June 1, exactly following the World No Tobacco Day, comes into force the Russian new law, which prohibits smoking in public places and which introduces major limitations for followers of the harmful habit. The anti-tobacco law, as the media has been calling it, should be an instrument to cut in Russia the number of smokers, who, the healthcare ministry says, make almost 40 percent of the nation. Some analysts say, over 75 percent men, about 30 percent women and over 40 percent children and teenagers smoke in this country. The annual consumption per head - including babies - reaches 103 packs.

However, this time, unlike many smokers feared, the ban would not be working at cafes, restaurants and clubs, where puffing will remain legal for another year - to June 1, 2014. Beginning from June 1 of the current year, smokers will be dismissed from hospitals, schools, airports, offices and staircases inside houses. The law may allow smoking inside apartment buildings only if those have specially allocated facilities with necessary ventilation systems and if those facilities are isolated from the other part of the house. Besides, all the residents should give their approvals first. This rule is applicable for offices and industrial facilities - smoking may be allowed in a special smoking room, equipped with a ventilation system.

Smoking would not be possible at certain places in the open air, which are connected with the transport. It will be prohibited within a distance of at least 15 metres from entrances to stations of the underground, sea and river ports, airports, bus terminals and railway stations, likewise indoors of those facilities, too.

From June 2014, the ban will become effective for commuter trains and vessels, platforms, hotels, markets and shops. Banned at cafes and restaurants will be not only cigarettes, but also hookahs.

The control over abiding by the law would be another responsibility of the police, but the parliament deputies are sure that in the very beginning the society should give them a hand. For example, if somebody sees a smoker at a place, which should be free from smoke, a person should inform the police or even make a video of the violation.

The anti-tobacco law, Russia’s Healthcare Minister Veronika Skvortsova said, will result is 150-200 thousand lives rescued a year. She added that the nation’s health depends by 60 percent on the way of life. And on the healthcare system - only by 10-12 percent.

The public attitudes towards to the law vary. On one hand, most Russians support the ban of smoking at public places. On the other, many people still believe: stress, which may be removed by a cigarette, is more harmful. Some would even predict “tobacco riots” if the law is working fully. However, only a few may believe the law will be working.

“Sure, it is no good to smoke, especially at hospitals, but back in my student years I did hear smoking was not allowed at medical institutions, and still every day I can see doctors and patients smoking by hospitals,” the Novye Izvestia quotes a Moscow doctor, who preferred not to name himself. “Smoking at hospitals will not stop, probably the smokers would not be going for it that devotedly,” he said. “Prohibiting smoking abruptly for patients is not correct, at least for medical reasons. It may affect the state of those suffering from heart diseases. Should be fire or fine doctors for that? Then, who will remain working there?”

Many public people plan to insist on their right to smoke. For example, composer Igor Kornelyuk told the Komsomolskaya Pravda daily: “I shall be smoking everywhere. Let them put me in jail. If at some point I am out of mind and go to the politics, I shall join the party supporting smokers.”

The national movement for the rights of smokers, where a well-known actor and singer Mikhail Boyarsky is a leader, was organised back in March of 2012. “This law is a mere rendering of air,” he said. “People would be smoking at places where they have got used to networking. As for me, I shall continue smoking where I like, though not to interfere with others.”

Interestingly, as sociologists ask for comments on the law’s provisions - prohibition of advertising cigarettes, higher prices on tobacco, etc. - most people would approve of those.

“We have been tracing for a long time the public attitudes to smoking and to the anti-tobacco measures,” Head of Communications at the All-Russian Public Opinion Research Centre /VTsIOM, oldest polling institution/ Olga Kamenchuk said. “When we are asking of what bad habits people would like to get rid first of all, the top answer would be smoking. At the same time, the addictions rating - without what Russians cannot do - is topped by cigarettes, too.”

She claims a sceptical attitude towards the anti-tobacco law from smokers. “As we went into details - I mean, we asked how people may comment on this or that measure - the surveyed smokers turned out to be supporting them! For example, 72 percent smokers are for a full ban of advertising tobacco. Every third said they would quit the habit if a pack reaches the European price level of about 150 roubles.”

By the way, experts say higher excites and prices should be the next move. Russia is among the world’s leaders in smoking, and the cigarette prices are much lower than those in the European Union’s poorest countries.

“The most effective measure, which has proven its effectiveness in dozens of countries worldwide, is higher excites on tobacco and higher prices on cigarettes,” Co-Chair of the Russian Anti-Tobacco Coalition Daria Khalturina said. “The experience demonstrates that higher excites result in the effects reached from other measures - the frightful pictures, bans and treatment altogether.”