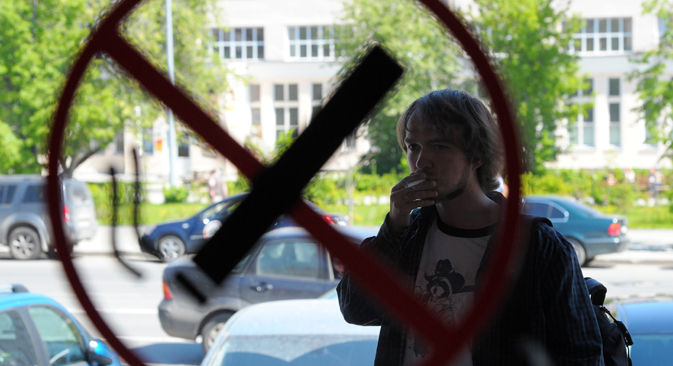 Russians are not allowed to smoke in public places since June 1, 2013 under the new law. Source: RIA Novosti

Russia, the world’s second biggest cigarette consumer, has put into place a ban on smoking in public areas, including airports and railway stations. Lack of police control is cited as one of the reasons why Russia’s efforts to limit smoking in public spaces will likely have little effect on the habits of its citizens.

As of June 1, smoking in Russia has been banned in offices, work zones, public buildings, schools, medical institutions, entranceways, elevators, children's play areas, on public transport, beaches, and inside or anywhere within 50 feet of an entrance to subways, airports and rail stations. The sale of cigarettes is prohibited inside a 330-feet radius of educational establishments.

The penalty for violation of the law is a fine of up to 1,500 rubles ($47) for individual smokers and up to 90,000 rubles ($2,800) for legal entities. A full ban is also in force on cigarette advertising in printed media and online. In addition, as of June 12, packs of cigarettes will display graphic warnings of the consequences of smoking.

Starting January 1, 2014, a minimum price will be set on tobacco products, and, as of June 1, 2014, smoking will be banned in restaurants, hotels, shopping malls, courts, and onboard long-distance trains. Cigarettes in Russian towns and cities will be sold only at stationary outlets and under a pricelist, with no open display at the counter.

View the infographic: Will Russia's new law reduce smoking or not?

According to data from the World Health Organization for 2009, thirty-six percent of Russian citizens over the age of 15 smoke on a daily basis. Fifty-three percent of men and 18 percent of women are inveterate smokers.

The Tobacco Atlas study, conducted by the American Cancer Society and the World Lung Foundation, asserts that, by volume of cigarettes consumed, Russia is second only to China, which accounts for 38 percent of the world market. Russia's slice is 6.5 percent, followed by the U.S. with a fraction over 5 percent.

According to a survey by the All-Russian Public Opinion Research Center, more than 75 percent of Russian citizens support the total ban on tobacco advertising and on smoking in public places. Forty-seven percent of those surveyed believe that the new law will reduce tobacco smoking in Russia, and almost the same number of respondents (46 percent) do not.

Forty-five percent of respondents, of whom 20 percent smoke and 61 percent do not, are of the opinion that the tobacco control law should be as tough as possible. Forty-nine percent of Russian citizens polled hold the opposite view (75 percent smokers; 32 percent non-smokers).

Only 8 percent of those surveyed by the Levada Center, a sociological research organization, are confident that the ban on smoking in public places will be fully observed. Thirty-two percent believe that a ban cannot work in principle, but 54 percent think that it will be partially observed.

In an interview with Rossiyskaya Gazeta, the head of the Moscow police, Anatoly Yakunin, admitted that, at present, there is no mechanism to deal with violations of the tobacco control law. "We hope that they [smokers] will prove to be conscientious and gradually begin to comply with the law, although we do have certain doubts," said Yakunin. "There will be a transitional period, during which we will limit ourselves more to verbal warnings."

Andrei Loskutov, executive director of the All-Russian Movement for Smokers' Rights, believes that the new law creates "humiliating conditions of existence for all smokers in Russia."

"People who legally buy a product that is lawfully produced and sold on the territory of Russia are effectively being denied the right to consume it," said Loskutov. "Forty-four million Russian citizens are being shown the door, since the street is essentially the only place left where smoking is permitted."

Maxim Korolyov, head of information agency Russky Tabak, expects the anti-tobacco measures to cut the number of smokers, given proper control. "In Russia, there are two categories of tobacco lovers: those who are physiologically addicted to smoking, and those who smoke for the sake of their image," said Korolyov in an interview with Ogonyok magazine. "When the latter are faced with less comfortable conditions, they will quit the habit."

At the same time, Korolyov drew attention to provisions in the law that are, in his opinion, superfluous — such as the ban on smoking at airports. "Transit passengers will light up wherever," said Korolyov. "At Vnukovo Airport, the toilets and other secluded nooks have replaced the now dismantled smoking rooms."

Correspondents for RIA Novosti went around to some of the places where smoking is now off limits and saw for themselves how the new law is being observed. There were about 10 people smoking at the entrance to Kievksy Station, for example. "If I don't have a smoke now, I'll have to wait five hours for another chance — I won't have time at the airport, and onboard the plane it's forbidden," said one of them.

The police have so far refrained from driving smokers away. "We don't have enough time to inspect passengers' bags, and we're supposed to chase smokers as well?" one officer was quoted as saying by RIA.

According to RIA, the smoking ban is fully observed on the territory of the Russian Economic University. "Students are easily persuaded — no one wants problems with the dean," said a security guard responsible for overseeing the university grounds.

Yet students admit that, if they feel the urge to light up, they simply find a spot further away from the university — closer to the subway, for example. That area, however, is now officially a smoke-free zone too.