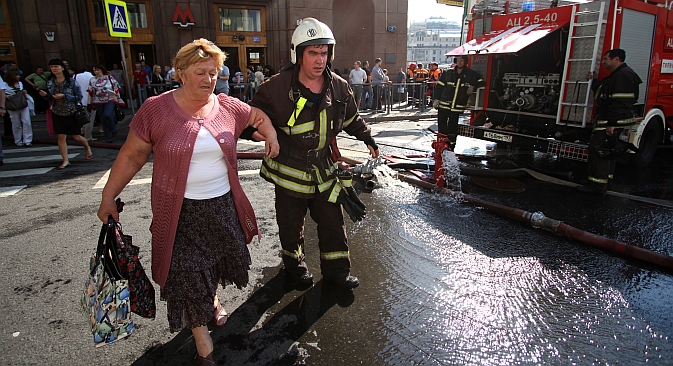 Up to 5,000 passengers were evacuated from eight stations of the Moscow metro. Source: RIA Novosti

Spontaneous combustion and a short circuit in a metro tunnel left dozens injured and led to traffic gridlock in central Moscow.

A fire and a power cable short circuit on the Moscow metro on Wednesday left more than 50 people injured in two separate incidents on a 3.5-mile stretch, causing traffic gridlock as up to 5,000 people were evacuated from eight stations.

A power cable shorted on a stretch of the oldest line of the Moscow metro near the Kremlin, connecting two central landmarks – the city’s biggest park and three railway stations.

The power cable short circuit occurred at 12:37 pm, just half an hour after trains resumed on the same stretch of metro line after a fire some four hours earlier.

The line was first closed at 8:20 am after the spontaneous combustion of 10 meters of underground power cable to the southwest of Okhotny Ryad, a station adjacent to the Kremlin and the State Duma. The second incident took place in the tunnel to the southeast of Okhotny Ryad.

A central street leading to the Kremlin, Bolshaya Dmitrovka, was closed for traffic twice to give enough room for firefighting and rescue service vehicles. The Emergency Situations Ministry reported that 275 people and 75 vehicles were used in the firefighting operation this morning. The fire was put out at 9:04 am.

Up to 5,000 passengers were evacuated from eight stations of the Red Line in the first incident. By early afternoon 52 people, including one child, had sought medical attention over carbon monoxide inhalation, the RIA Novosti news agency reported, citing the city’s Health Department.

“The train stopped at the Park Kultury station [three stops southwest of Okhotny Ryad], which was extremely overcrowded,” said Pavel Koshkin, an editor at Russia Beyond the Headlines, one of the passengers who got trapped on the metro this morning.

“The metro personnel announced that the train would not go further and people started getting out of the station onto the street,” Koshkin said.

“Although all trains stopped going in the direction of central Moscow and no explanations about the reasons of the gridlock came from police and metro security service, people were not panicking. They were just curious about what had happened. Finally, hordes of people went onto the street to reach the nearest metro station that was working in central Moscow.”

Passengers were recommended to use above-ground transportation. The Moscow Transport Department reported that an extra 40 buses, trams and trolleybuses were deployed to the routes in the areas near the closed metro stations.

However, many passengers complained that no information was provided through the metro loudspeaker system.

“It’s hell here,” tweeted Yulia Kiseleva, who was on a train that was halted at Komsomolskaya station. “Metro trains and commuter trains are arriving at the three railway stations, rush hour, the metro is closed, people are storming trolleybuses, no explanations.”

Irina Gorbenko, who was at Chistiye Prudy, two stops east of Okhotny Ryad, had to call her friends and ask them to look up on the Internet how she could get to her office by public transportation.

Many passengers caught in the metro closures in the morning were late for work. The Moscow government opened a hot line for students who were barred from taking exams because they arrived late.

RIA Novosti reported that crowds of hundreds of people near some of the closed metro stations were trying to catch gipsy cabs. Some drivers charged up to 10 times more than they normally would for a ride, the agency reported.

The Red Line was reopened after the second incident at 2:15 pm.