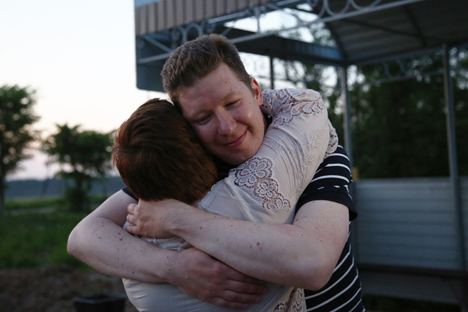 Alexei Kozlov, the husband of prisoners’ rights activist, Kremlin critic and author Olga Romanova, was released from a penal colony after spending almost five years in custody and waiting three days for a government courier to deliver a court verdict setting him free.

Alexei Kozlov, 39, is perhaps the most well-known Russian businessman after Mikhail Khodorkovsky to keep a prison blog.

His wife, journalist Olga Romanova, is one of the most prominent figures in the recently engendered protest movement among the middle classes. She led the largest rally against Vladimir Putin on December 25, 2011.

After her husband was imprisoned, Romanova set up a movement to protect the rights of prisoners.

On the evening of June 3, Alexei and Olga dined together for the first time in nearly five years, at a gas station cafe 185 miles northeast of Moscow, close to where Kozlov was being held.

According to a court order, Alexei should have been freed three days earlier, but the prison administration refused to release him, ignoring the documents submitted by his lawyers.

Alexei was released only after he declared a hunger strike and the national media gathered at the prison gates.

"Alexei was taken a few kilometers from the penal colony in a cavalcade of cars, and that's where we picked him up," Olga Romanova tweeted on June 3.

Five years ago, Alexei was placed in custody on charges of fraud and attempted legalization of stolen funds. The accusations, Alexei believes, were fabricated at the request of Sen. Vladimir Slutsker, a former business partner.

In Russian practice, the charge of "fraud" is frequently used to unlawfully seize a business. According to Ombudsman for Entrepreneurs' Rights Boris Titov, three-quarters of the complaints he receives mention unlawful harassment under this article.

Titov is advocating an amnesty for 111,000 entrepreneurs convicted, like Alexei Kozlov, for economic crimes. He recently presented his initiative to Vladimir Putin, who described the proposal as "crude."

Starting in August 2008, after being jailed in Butyrka in the center of Moscow (one of Russia's oldest prisons), Alexei Kozlov regularly wrote to his wife.

His letters, in which he talked about everyday prison life — in particular, the humiliating conditions of detention and the kickbacks demanded by the administration — formed the basis of "Butyrka Blog," which Olga ran, with his consent, on Slon.ru (one of Russia's leading business portals).

In April 2010, Butyrka Blog won the "Best of Blogs" international competition, sponsored by Deutsche Welle, in the category "Best Russian-language blog as voted by readers."

Before becoming an accidental author, Alexei headed the medium-sized Moscow firm Korfinans, which invests in construction projects. He also worked as an assistant to Mikhail Margelov, a member of the upper house of parliament.

Kozlov was arrested in July 2008 and spent the next seven months in remand: The court ruled that Kozlov's possession of a passport gave reason to believe that he would try to abscond from Russia.

In March 2009, the District Court of Moscow sentenced Alexei to eight years in a penal colony, on charges of fraud and attempted legalization of monetary funds.

According to the investigation, in 2006, as the head of Vladimir Slutsker's Finvest, Kozlov arranged to steal shares in the firm's subsidiary companies to produce artificial leather under the "Iskozh" brand.

Kozlov allegedly transferred 33.4 percent of shares owned by OJSC Iskozh to accounts held offshore, amounting to 254 million rubles ($7.9 million). The defendant pleaded not guilty, claiming that several documents submitted by the investigation had been forged.

In 2011, Moscow City Court reduced the sentence first to seven, then five years, taking into account Kozlov's partial repayment of the damages and the amendments to the Criminal Code mitigating the penalty for economic crimes.

In September 2011, the Supreme Court of the Russian Federation overturned the verdict, released Kozlov from custody under recognizance not to leave, and sent the case for review.

In March 2012, the District Court of Moscow again found Kozlov guilty and sentenced him to five years in prison. Given that, by that time, Kozlov had served part of the term, he faced another 18 months in the penal colony.

The leader of the movement "For Human Rights," Lev Ponomarev, described the verdict as an act of reprisal by the authorities against Olga Romanova, who had played an active part in the protests against Vladimir Putin in the winter of 2011-2012.

On May 31, 2013, Moscow City Court exonerated Kozlov from the charge of attempted legalization, in line with the position of the Supreme Court, which found no criminal offense in the actions of Kozlov under the relevant article.

Under the "Fraud" article of the Criminal Code, the sentence was left unchanged. By the time the ruling was delivered, Kozlov had already served his sentence under the article. Hence, in point of fact, there were no grounds to detain him further after the court's pronouncement.

The press office of the Russian Federal Penitentiary Service reported on June 2: "Kozlov will be released as soon as the court's ruling is delivered to the colony by courier communication."