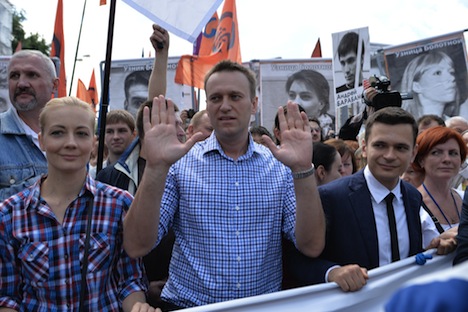 Both opposition activists and the Russian human rights ombudsman Vladimir Lukin seemed satisfied with the results of the protest and did not advance any complaints concerning the police's behavior.

Some 6,000 people took part part in the opposition march in central Moscow on Wednesday, according to the press service for the Interior Ministry's Main Department for Moscow. Meanwhile, the march organizers claim that the march brought together at least 30,000 participants.

Nine people were detained before the opposition march, according to the Interior Ministry. Opposition activist Ilya Yashin earlier said that several Left Front activists had been detained as well.

"Left Front activists are being detained for unfolding left Front flags," Yashin said, citing law enforcement officials, who said the detentions were made on the orders of the prosecutors.

Navalny was among the first people to leave the march, an Interfax correspondent reported. He refused to talk with the numerous journalists who followed him, only thanking the activists who chanted his name.

"No serious incidents have been registered yet, thank God," said Lukin, who attended the march.

He had come to the march to watch and do everything he can to ensure that no violations occur there.

Likewise, opposition activist Pyotr Tsarkov, one of the organizers of the march, didn't have any complaints on police.

"No incidents have occurred yet," he said. "Everything is going fine. We don't have any complaints about the police."

Several opposition groups also took to the streets in the center of St. Petersburg on Wednesday, and, likewise, they all passed without serious incidents.

Activists of some opposition groups gathered on the Field of Mars in support for some participants in the May 6, 2012 rally on Bolotnaya Square in Moscow who are being tried for the organization of mass disturbances.

The St. Petersburg city police department told Interfax some 100 people took part in this demonstration, which passed virtually without incidents, and only one man was brought to a police station for using obscene language.

Members of the coalition Democratic Petersburg consolidating various political parties and other non-governmental organizations, including LGBT groups, held solitary pickets on Nevsky Avenue to protest against human rights abuses, inspections of NGOs, and a federal bill banning propaganda of homosexuality among minors.

"Just as was planned, solitary pickets on Nevsky Avenue were placed between Griboedov Canal and Uprising Square [located in central St. Petersburg]," said Democratic Petersburg spokesman Vsevolod Nelayev in an interview to Interfax.

"There were almost no provocations, except for an attempt to snatch a banner from a participant's hands," he added. "The woman was not harmed. On the whole, people treated the pickets quite benevolently."

Nationalistic organizations also held a demonstration near the Finland Railway Station. The event lasted about one hour and passed without incidents. St. Petersburg police estimated the number of its participants at about 50.