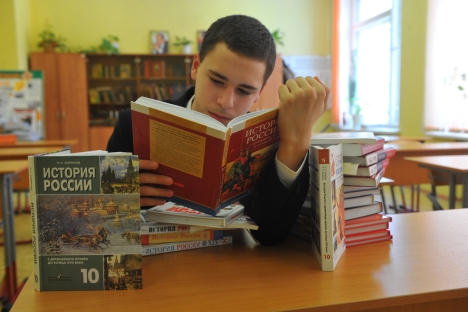 71 percent of Russians support the idea of a canonical history book. Source: PhotoXPress

Russia’s history is too complex to hope President Vladimir Putin’s instruction to write a canonical history book for school students may be implemented soon. The process is already underway, though. There has been developed a concept of the unified standard of teaching history in secondary schools, to be used as a basis for new manuals. Experts have already highlighted controversial aspects of national history, which continue to cause acute debate in society.

The list of “problem” events is being compiled as an aide for teachers - to help them prepare extra references and notes that would make it easier to explain to students the essence of certain events. Such episodes in Russia’s more than one-thousand-year-long history are too numerous to count. Many of them took place in the 20th century.

At this week’s working meeting, held by the chief of Russia’s History Society, State Duma Speaker Sergei Naryshkin, experts presented a draft concept a future standard history manual should be based on. The concept will formulate a standard that will determine the mode of teaching history in Russian schools, as well as a list of history questions that require extra instruction of teachers.

So far only the first phase has been coped with. Problems began to crop up virtually in no time. Russia’s one-thousand-year-long history is brimming with controversial events. According to early estimates, there are 31 such issues starting from Ancient Russia’s days up to the Vladimir Putin presidency.

Experts are divided over the issue of “Prince Alexander Nevsky’s historical choice in favour of subordinating Russian lands to the Golden Horde,” “the causes and effects of Russia’s takeover of Ukraine,” “the causes, effects and evaluation of the fall of Russia’s monarchy and the Bolsheviks’ rise to power and their victory in the Civil War.”

Some of the “problem” issues are formulated in a way that will inevitably cause fierce debate in society, and even scandals, warns the daily Nezavisimaya Gazeta. Some may be international.

Sergei Naryshkin said that by November 1 the concept might be finalized and approved and after that a contest declared for the best history book.

However, Education Minister Dmitry Livanov, when asked when the history books may be out of print, replied the other day it was “anyone’s guess.” He explained that the whole process of creating a manual consisted of several fundamental stages. Phase one - creation of the concept of a standard - is over. Phase two - the concept is to undergo public discussion with the use of various resources, including the Internet, and the public’s attitude to certain main events, ideas and dates must be identified.

Phase three - finishing touches to the standard and the concept of manuals and their authorization. The contest for writing the manual is to be declared on November 1.

The final phase will be expected to produce the manual proper - in fact, a whole line of national history manuals that would incorporate the unified teaching standard and offer a unified interpretation of historical events.

“It is hard to tell how much time this will take, because this very complicated and responsible work,” Livanov said about the day when Russia’s schools might hope to get the new teaching aid.

Putin believes that Russia should have a “canonical” history manual, but a wide spectrum of interpretations will be crucial. “Indeed, if in the East we shall have one version of history, in the Urals, another one, and in the European part of the country, something else, this will be ruining and possibly eventual ruin an integral humanitarian space of our multi-ethnic country,” Putin said.

The idea of a canonical history book has encountered some critics. Historian Natalya Basovskaya argues that not a single good history book can be written on instructions from the authorities, and that “not the most talented historians, but the quickest ones” will be the first to act on Putin’s request.

Whatever the case, most Russian citizens see eye to eye with the head of state. A Levada Center Opinion poll has found out that 71 percent of the respondents share this idea.