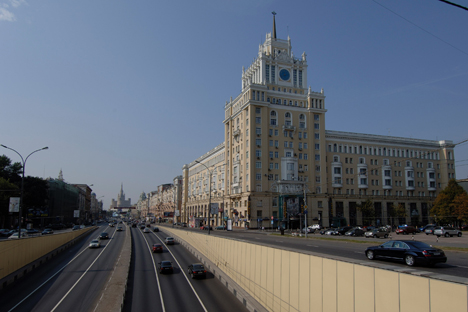 The Hotel Pekin, built in 1955, will be open after reconstruction in 2017. Source: PressPhoto

Over 350 historical artifacts from the 17-19 century were found during the archaeological works at the Hotel Pekin in Moscow. The collection will be handed over to the Moscow History Museum.

Archaeologists are working hand-in-hand with builders, as the renovation of Hotel Pekin on Moscow’s Bolshaya Sadovaya Street continues. Around 350 objects from the 17th–19th centuries were discovered here between March and May, on the site of a staging post that once stood on this spot.

The finds here shed light on the secrets of everyday life in centuries past. Discoveries include a leather money bag, wooden tools, furniture and footwear, as well as large quantities of ceramic items, stove tiles and glass vessels.

“There is no doubt about the great historical value of these objects,” says Vladimir Berkovich, who is in charge of the archaeological work and serves as deputy director of the company Archaeological Research in Construction.

“This site has never been studied by archaeologists,” says Berkovich. “The groundwater here has to be pumped out, and it takes a lot of time to sift the soil. On the other hand, the fact that the soil is moist is what has helped preserve the material so well.”

As Berkovich noted, ancient Moscow grew and developed from the center to the perimeter: from the Kremlin to the white stone borders of “Kitay-gorod”; then to the boundary of the so-called Earthen City, which is now the location of the road Sadovoye Koltso.

The “sloboda,” or suburb, in which the “yamshchiki”(carters and coachmen) lived in those days was moved to the area beyond this boundary. They transported the post and goods from Moscow to Tver and beyond, right up to Europe — hence the name of the district is Tverskaya-Yamskaya Sloboda.

The first major treasure in Moscow was discovered on May 8, 1895, in Kitay-gorod near Ilyinka Street. It consisted of five helmets, five chain-mail tunics, 12 spears and a purse containing coins minted before Ivan IV was crowned czar (1547).

In the Soviet era, archaeologists found a complete kiln for firing ceramic items, potter’s tools, crockery and even clay toys in Goncharnaya Sloboda. In 1982, during the refurbishment of the Rossiya Hotel, archaeologists discovered a unique, finely decorated, 15th-century metal icon cover for an icon of St. George.

A large number of historical artifacts were discovered in the 1990s, during the large-scale renovation of Manezh Square next to the Kremlin’s walls.

This square has a rich history. During the reign of Ivan (IV) the Terrible, this was the location of Streletskaya Sloboda, where the czar’s Stremyanny Guard regiment was stationed, and rows of traders’ stalls alongside it.

For centuries, the square was a place for trade, and it seethed with life. Manezh Square took on its modern boundaries only during “Stalin’s reconstruction” of 1934–1937, after the historic buildings had been demolished.

Careful research was undertaken in 1993, before work began on renovating the square, and a dense layer of cultural relics was discovered, packed with stone and wooden structures from various centuries.

These included the early remains of a 12th-century settlement and practically the entire foundations of the Voskresnsky Bridge — one of Moscow’s ancient adornments — as well as various handicraft and everyday objects.

However, the main find was the impressive treasure store: 16 silver vessels, 335 Western European coins and 95,429 Russian coins from the 15th and 16th centuries.

A new approach to the historical heritage was also developed at that time. It was decided not to destroy underground architectural structures, but rather to preserve them. The term “museumization” came to the fore, and the Moscow Archaeology Museum was created.

Incidentally, the Moscow Archaeology Museum is located in an underground pavilion on Manezh Square, right on the spot of the 1993–1996 excavations.

In the 2000s, thanks to the constant construction or restoration of historic buildings in the center of the city, new exhibits continue to be added to the Moscow History Museum’s collection.

In 2008, for example, the most valuable finds on the site of the Tyoply shops in the Kitay-gorod district were identified as an axe amulet, a bone chess piece with finely worked details in the face and clothing, and a small, 15th-century, glass icon of foreign origin depicting a figure of Christ.

The exhibits discovered on the Hotel Pekin site will also become exhibits. “Three hundred and fifty objects is a very big find for Moscow,” says the deputy director of Archaeological Research in Construction.

“The whole collection will be carefully processed and studied; and then, after three years, it will be handed over to the Moscow History Museum.”

“But people will be able to see it this fall,” Berkovich says, “at an exhibition in Gostiny Dvor, where we traditionally present our collection to the general public.”