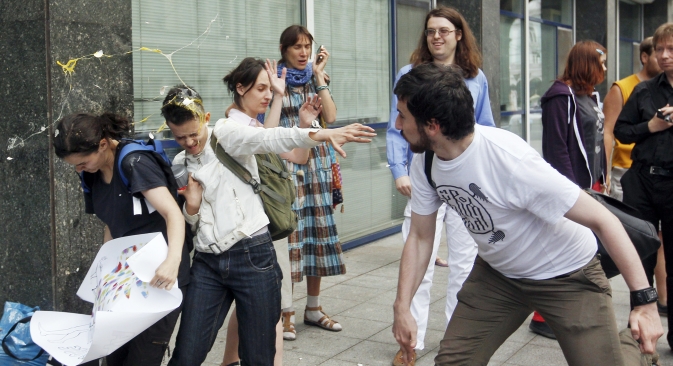 A radical Orthodox believer (R) throws an egg at gay rights activists during a protest against the 'gay propaganda' law in central Moscow June 11, 2013. Source: Reuters

While proponents of the new law on homosexuality claim that they express the opinion of the majority of people, their opponents warn that the gay propaganda ban may isolate Russia from the West

On June 11, the State Duma passed a law that was once described as a "ban on the promotion of homosexuality." In fact, the new law represents a set of amendments to a range of existing laws. For legal entities, the penalty for violation is a fine of up to 1 million rubles ($31,200), while, on top of monetary sanctions, foreigners could face expulsion from Russia for violating the statute.

The debate has been ongoing since the appearance of a similar local law in Russia's second city, St. Petersburg. The Federal Assembly began consultations on the bill on Jan. 26, and, on June 11, it was adopted in the second and third reading.

The penalty for violation of the new law is administrative, mainly consisting of a fine for promoting non-traditional sexual relations among minors.

In the event that non-traditional values are disseminated via the media or online, the fine is 50,000-100,000 rubles for citizens, 100,000-200,000 rubles for officials and 1 million rubles for legal entities. Licenses could also be revoked for the same 90-day period. The sanctions for foreigners are even tougher: For the same offense, they face expulsion from Russia or 15 days under arrest.

As the author of the bill, State Duma deputy Elena Mizulina, told RBTH, the law is intended to "curb the demonstration of sexual relations." They are now taboo in public discussion, as is pornography.

"According to a poll by the All-Russian Public Opinion Research Center, 88 percent of Russian citizens support the law," says Mizulina. "More than 350,000 people submitted proposals to our committee in the space of just four months."

She maintains that the final draft of the law shows tolerance: The gay community's request that the word "homosexual" be removed, for example, was heeded; it was replaced by the phrase "non-traditional sexual relations."

"We want children to enjoy freedom of choice, but when they are grown up. Let them choose between traditional and non-traditional relations, but they must be shielded from such information at a formative age, because it could negatively impact on their development," says Mizulina.

The leader of the Russian LGBT community, Nikolai Alexeev, is sure that there is now a threat of re-criminalization, which would mean the introduction of penalties for entering into homosexual relations. Still, Alexeev believes the authorities are unlikely to take that step: Such a move would bring down a new "iron curtain" between Russia and the West, where many officials have children, property and capital.

Sergei Markov, director of the Institute of Political Studies, insists that the law will not cloud Russia's image in the eyes of foreigners and will, on the contrary, be an indisputable plus for a certain category of Europeans.

"The document is in line with the most progressive political currents. It is being done to ensure that the most diverse layers of society can live side-by-side harmoniously," says Markov.

He notes that public opinion is indeed against the open display of homosexuality, and the State Duma is simply executing the democratic principle by supporting the views of the population at large.

"There are two extreme views: The first proposes the adoption of homosexuality as acceptable and the legalization of gay marriage; the second seeks to prohibit and punish non-traditional relationships. The State Duma has chosen a compromise solution that neither punishes homosexual relationships nor recognizes them as normal," Markov says.

"EU countries are likely to reach the same conclusion, because, in France, for example, the legalization of same-sex marriage is only worsening its image," he added.

Sergei Karaganov, deputy director of the Institute of Europe under the Russian Academy of Sciences, does not share Markov's opinion.

"Such debates and laws are making us a laughing stock," he says.

Incidentally, the author of the St. Petersburg law was even paid a visit by renowned comic actor and gay rights advocate Stephen Fry, who himself found the actions of the Russian authorities ludicrous.