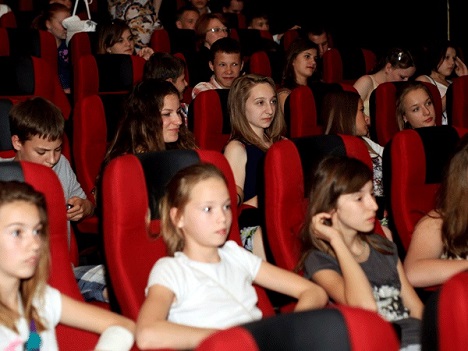 Charity organization “Krilya” (Wings) decided to give children living in orphanages a chance to show the world about their lives firsthand, through the medium of film.

International news and changing regulations around orphaned children have been in a whirlwind since January’s Dima Yakovlev law: the ban on the adoption of Russian children by Americans.

Amidst the political turmoil are, of course, the orphans themselves. Charity organization “Krilya” (Wings) decided to give children living in orphanages a chance to show the world about their lives firsthand, through the medium of film.

The project involved 40 children, aged 12 to 17, from orphanages across Moscow and the Moscow region: “Nadezhda” (Hope) orphanage, “Molodaya Gvardiya” (Young Guard), and Sofinskovo and Chekhov’s homes.

The project was called “Svoyo Kino,” (your own cinema/movie) and had three phases. In the project’s first phase this March, the children received five days of training in cinematographic techniques.

Phase two was spent writing and editing movie scripts and subsequently filming the products of their broad imaginations.

As is expected from a first-ever-film project with teenagers just learning the fine art of cinematography, aesthetically, the results were not staggering. However, the window that they opened into the orphans’ lives and perceptions of reality, was both moving and inspiring.

Incredibly sensitive films were produced by the children. Unsurprisingly, they often centered around family relations and loss. Bullying was also a popular theme and, most often of all, friendship.

“The children wrote about what’s close at heart,” Sasha Belousov said. Belousov is one of the actors the children had at their disposal while filming.

The children’s’ varied experiences led to some very diverse avenues of exploration, with some even verging on the mystical.

Alexei F., 15 years old, came to Sofino when he was 9 years old. He wrote a critical movie called “Medical Debt,” in which a poor man with a broken arm goes to the doctor without insurance. The physician refuses to help him.

The story is inspired by his own life events: Alexei once was in this situation himself. Through his movie he had the chance to retaliate for this seeming injustice: A passing gypsy casts a spell on the fictional doctor, causing him to switch bodies with the poor man and making the doctor realize what he has done.

This beautifully surreal twist, in the tradition of Russian writers like Gogol, allows the crowd to laugh at this tangibly critical history.

Karina P., 15 years old, wrote “Girl with the Guitar.” Karina came to “Nadezhda,” when she was 7 years old. In her film, a girl that likes to play guitar has to deal with a drunk and violent mother. She decides to call child protection herself and moves to a children’s home on her own command. The film’s protagonist states: “It is better to live in an orphanage than live with an alcoholic mother.”

“It’s not my own history,” Karina explained. “But I wrote it because it is recognizable, and many people will understand this story and feel familiar to it.”

The project culminated in a film festival and awards ceremony at the movie theater “Fitil.”

There were 10 categories in which the orphans’ films competed for a golden “Oscar” style award. “Oscars” were awarded by Russian film and TV actresses, like film star Natalya Ungard and Agatha Mutseniyetse, who is famed for her role from 2010 to 2012 in the drama series “Closed School.”

Karina has little understanding of the recent law that prohibits Americans from adopting Russian children, and has a refreshingly straightforward take.

“If parents want to adopt a girl, and the girl agrees to it, why not? I think a foster family is like having a real mother. Then, [when the girl is adopted] she will forget about all her problems, she can live.”  According to Karina, the child’s approval is most important.

The children are going to construct their own state in which every child gets his or her own responsibilities.

For more information on the project and photo's go to: www.krilyafond.ru