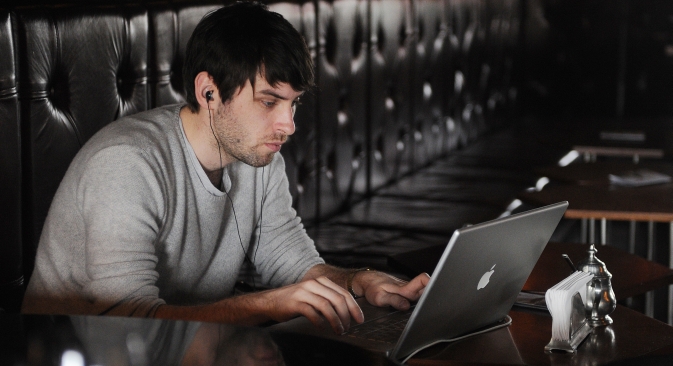 Attempts to toughen Russia’s piracy laws were met with hostility among bloggers and advocates, resulting in a softer version in parliament.

A draft bill to fight Internet piracy is moving forward in the Duma after a more punitive version provoked a firestorm of criticism. Attempts to legislate against piracy in Russia are often resisted, as many say they believe in the freedom to share information, a concept that goes back to the dissident tradition of self-publishing (samizdat) in Soviet times.

History of the anti-piracy struggle

1990s: Russian concert promoters use concerts with top pop stars to make a point: Huge machines near the stage destroy thousands of pirated cassettes and disks.

Late 2012: The Internet blacklist law is introduced (including more than 3300 sites, resources posted on the same IP addresses as banned domains).

Early 2013: The United States Trade Representative announces the signing of an agreement with the Russian intellectual property society on jointly combating piracy.

June 6 2013: A draft law on blocking sites with illegal content is submitted to the State Duma.

The original bill drafted by the Ministry of Culture stated that users as well as owners of illegal content would be punishable by law. Internet resources could have been blocked extra-judicially. The Ministry was forced to drop these clauses, however, after failing to gain the support of the Ministry of Communications and Mass Media.

As a result, a softer version of the bill was proposed that would block only specific information that violates copyright. Site owners and hosting providers are obliged to close access to such information at the request of the copyright owner within 24 hours. No court ruling is required. Failing that, individuals face fines of at least 5000 rubles ($156), while legal entities may have to fork out up to 1 million rubles ($31,270).

“It looks more like the notorious American SOPA bill (the Stop Online Piracy Act), which was scrapped after mass protests throughout the world, including Russia,” it said.

A coalition of activists and web concerns killed the Stop Online Piracy Act in the United States in 2012. A new bill called the Cyber Intelligence Sharing and Protection Act (CISPA) passed the House of Representatives this spring, but the senate refused to vote on what some still thought was an overreaching, cybersecurity bill.

The Russian Association for Electronic Communications said it doubts the Russian bill will succeed in stamping out piracy.

“The adoption of the law would cause an exodus of Russian site owners to foreign jurisdictions, financial losses and widespread violations of the rights of law-abiding Russian and hosting providers, communications operators and site owners,” said analyst Irina Levova in an interview with Lenta.ru.

As a result, money would return to one segment of the market – the buyers of rights – but it will happen at the expense of another segment, the owners of sites and file exchangers.

The problem, however, runs deeper: There is no exact definition of the term “piracy.” A person hiding behind the nickname Fyodor Dostoevsky blogged: “It is very hard to prove that torrent users are acting as ‘pirates’: They can download content for their own use without any economic benefit.”

“If laws are passed that forbid the sharing of books, music and films, proceeds will not increase, people will simply not be in the position to share anymore," he said. "The only result will be that people will read, listen and watch less.”

Some lamented that the Ministry of Culture could be the source of such a chilling effect.

On the other side are the artists, who say they are the victims of piracy. The Read Legally project backed by the majority of Russian writers. The initiative is designed to show readers that licensed products are of higher quality and are easier to order and buy off the Internet.

Popular detective story writer Taras Burmistrov supports the Minister of Culture Vladimir Medinsky, who happens to be a writer himself.

“As a person who has about a dozen books stolen from him every day, I can only welcome it,” he told a meeting of copyright owners and cultural workers.

Science-fiction writer Sergei Lukyanenko said he would leave the profession unless the piracy situation in Russia improves for writers.

“I know a great number of notable authors who have stopped writing," he said. "They either go into script writing or computer game production. An author who is just starting out is practically unable to get a creative career off the ground.”

Many Russians are familiar with, and deeply respectful of, the samizdat (self-publishing) tradition. Many see some forms of individual piracy as part of that culture.

The champions of electronic democracy – the Pirates’ Party of Russia – want the existing payment systems to be revised. If a person’s right to download (for a fee) and distribute is approved, the authors only stands to gain from it, the party reasons. The Russian Pirates’ Party also seeks a shortened time period before films, music and books enter the public domain.

In addition to torrents, one bastion of piracy in Russia is the social network Vkontakte, an analogue of Facebook. Some music groups post their albums or new songs on the site without charging a fee. Likewise, users may post or download any song or even a film.

However some oppose this practice: Popular Russian singer MakSim recently sued the social network for $17,700, seeking compensation for 11 songs uploaded there. Vkontakte challenged the claim. The court accepted the complaint but has yet to deliver its verdict.

The Russian search system Yandex offers its own resource Yandex.Muzyka, which cooperates with rights owners and earns money from advertising. Listeners can enjoy licensed musical pieces on line without downloading. In less than a year, Yandex.Muzyka had garnered an audience of 2.8 million.