Happy memories from a Soviet childhood 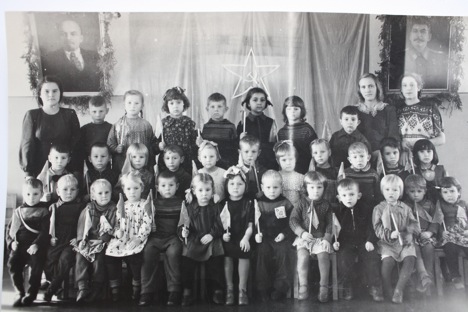 Children in the USSR were trained to be perfect communists. Source: Tatiana Korablinova

Bangalore-based Elena Revinskaya reflects on fond childhood memories in Soviet Siberia, when all children were raised to become good Communists.

They say that childhood is one of the best times in our life, a period without worries and problems. This is when you don’t have to feed your family but can just play with your friends, eat, sleep and enjoy growing up. How much we would give to go back to that carefree time of our life!

Sometime back I shared with my readers my childhood memories growing up during the Soviet era. Unintentionally, my article came out very negative giving the misleading impression that our childhood was so tough and unhappy. It was tough but definitely not unhappy. Moreover, I believe that our childhood was more fulfilling than that of today’s children.

Probably this is more related to that era rather than to the political regime. We had no worries and no fear. We spent the whole day playing outside, riding the bicycle, skating, or just walking around. There were no cell phones, no security guards, and we were allowed to go anywhere we wanted without telling the parents.

Now back to the Soviets. The Communist Party trained its followers from a very early age. Starting from the 1st grade, children were given the title "oktyabrenok" meaning "A child of Red October". We were given a small star-shaped pin with an image of baby Lenin. It didn't matter much for us. When the time came to be accepted to “Pioneers” - the next step towards becoming a Communist - it was very important. By the end of the 3rd grade, we were evaluated for qualification to become Pioneers. The older kids and teachers checked grades, behaviour, achievements and so on. The event of acceptance to Pioneers was grand and exciting. The fellow Pioneers would tie a red bandana-type tie on our necks and since then we would become young responsible members of the Communist Party.

We were taught to take care and protect the nature. It sounds silly but we literally had to take care of the nature. One of our favorite activities was to play a game of "nurses" and cure trees! We would take Red Cross bag filled with medical supplies: bandages, scissors, cottons, disinfectant and we would go fully loaded for a project "To cure the trees". We would find broken branches, cut stems, bent bushes and apply disinfecting solution and put bandages. It felt good and it developed the sense of care.

We used to take a lot of risk and do lots of dangerous things. Imagine - 10 year old kids decide to jump on the roofs of metal garages with slippery surfaces and sharp edges. To satisfy the thirst, they would grab an icicle from the same metal garage and suck it as an ice cream. Dirt, bacteria - who cares! Whenever we got sick, our mothers had very "unique" solutions. When I had a sore throat my mom would apply kerosene on it and it worked! For the kids who had deficiency of vitamin D, the cure was to dig a hole in warm sand, put the child in there and cover with that sand. If you had a wooden splinter in the finger, best solution was to put it in boiling water 3 times.  It still makes me smile and brings back happy memories.

Hardships of growing up in the USSR

The best heritage from Soviet times was the availability of free education. The approach of socialism when it came to equality transformed into humongous opportunities for Soviet citizens to learn, study and explore. We had a very good education system, well developed network of extra-curricular facilities and huge support from the government to develop sports skills. My very dear memories are how we used to go every year to a pioneer camp; first as students and later as leaders.  It was always a great experience. First of all the location was most of the time outside the city in a deep Siberian forest with fresh air, with beautiful scenery and without the noise of the city.

The whole ideology of the Soviet time paid lots of attention to discipline.  I believe it was necessary to keep the society fit under Communist rule. Every day in the camp we would have an army type schedule - wake up at 7 am, go for collective morning exercise, eat breakfast together, followed by handicraft activities, music or dance, and the day would go on. My favourite time was in the evening next to bonfire with a guitar singing songs or playing group games.

My Soviet childhood was full of beautiful memories of those times, full of rules and discipline and being trained to work hard. We were taught to overcome difficulties and accept people not because of their income or status but for their warm heart and personality.