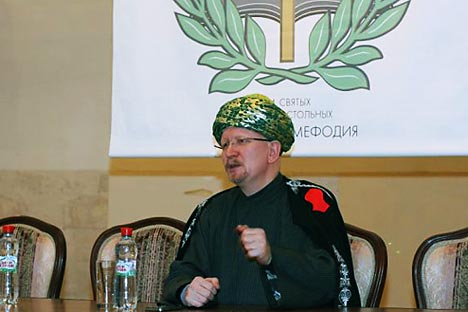 Farid Hazrat Salman: "Our beliefs may be different, but we all believe in the same God." Source: quran-sunna.ru

Farid Hazrat Salman, the head of the Ulema Council of the Russian Council of Muftis, talks about ways of fighting Wahabi propaganda and the contradictions inside Russia's Islamic community.

Would it be right to say that tensions between Muslims and Orthodox believers in Russian have recently been on the rise?

You can judge for yourself: the "Vesti Nedeli" TV programme recently reported that Stavropol Territory had lost some 20 percent of its Russian-speaking population. It is reported that non-Muslims are leaving Dagestan. I would not want similar reports to start coming from Tatarstan as well. Should that happen, our country will fall apart.

The key to peace and accord in Tatarstan lies on the national mentality, as Tatars are known for their tolerance. We have always been peaceful neighbours to Russian Orthodox believers and to Jews alike. However, the younger generation is growing less tolerant. One look at websites devoted to Islam would be enough: for each website devoted to "traditional" Islam, there are over 20 those that promote Wahabism, Salafism.

How did today's radicals emerge in Tatarstan?

It is a problem for the whole of the Russian state. We have an inflow of migrant workers, who back at home in Tajikistan, Uzbekistan, Kyrgyzstan, Kazakhstan were supporters of radical teachings. There are no controls over their coming into Russia since until very recently we all used to live in one big country, without any borders. During radicals' rallies in Tatarstan, I have seen a large number of people holding black banners of caliphates, and those were not ethnic Russians or Tatars but Tajiks and Uzbeks.

Having said that, closing Russian borders to people from Central Asia would not solve the problem. The task is far broader.

Tajikistan, for example, may very soon turn into a centre of radicalism. It has already started "flirting" with Qatar, a major supplier of radicalism to different parts of the world. For instance, Qatar has invested tens of millions of dollars in developing infrastructure around Paris. Muslim immigrants in Paris are becoming a target for brainwashing by preachers from Qatar. This may become a threat to us too, since Qatar is spending a lot of money on financing educational establishments and importing Salafi literature into Europe: Spain, Italy, France. Russia cannot tackle problems like these all by itself.

What contradictions are there inside Islamic communities and why do they arise?

There is a very sensitive theological question that sooner or later arises in any religious group in our country: whether to hold services in Russian, in their native tongue, or in the language of the original. From the point of view of the Muslim canon, a service must be delivered in the language of the country where it is held.

The first Muslim community on the territory of Russia was the Tatar. Therefore, for centuries Muslim services on Russian territory, from Kaliningrad to Sakhalin, have been delivered in the Tatar language. First, in Tatar and then, in the country's official language. There is nothing new here: in London, for instance, an imam would first say a service in Arabic and then, in English.

Now however, due to internal and external migration, the ethnic mix of Russia's Muslims has changed considerably.

I have spent five years as a mufti in Yamal. Half of the Muslim community there are Tatars and the other half are people from the North Caucasus, who do not understand services in Tatar. As a result, now, several years since I have left, there are no longer services in Tatar delivered in Yamal apart from in two or three settlements. In many Russian regions, services in the Tatar language have simply disappeared, which is a violation of the canonical rules.

At the same time there have appeared many muftis and imams who believe that all services should be done only in Russian. This may lead to further internal contradictions. It is not a national problem but rather a problem of mentality and theology.

Who are those muftis who themselves decide whether to deliver services in Russian or Tatar subordinated to?

Whereas radical Islam believes that an imam should be elected by the crowd. However, a crowd's choice is not always driven by good sense and logic.

What is your forecast for the future of relations between different faiths?

Last year I attended an international conference about the persecution of Christians in the Middle East. I may have objections to people converting from Islam to Christianity, but it is their private affair. One man from Pakistan, a Christian, told me how radical Islamists were killing Pakistani Christians. It cannot be tolerated!

The Prophet, peace and God's blessing be upon him, predicted that before the end of the world every Arab family (at the time Islam was spread only among Arabs) will be visited by disease. Not a virus or bacteria, but by an ideological malady. People will abandon the truth and will adopt radical views. It will be a dead-end. In order not to end up there, it is necessary to understand: our beliefs may be different, but we all believe in the same God.