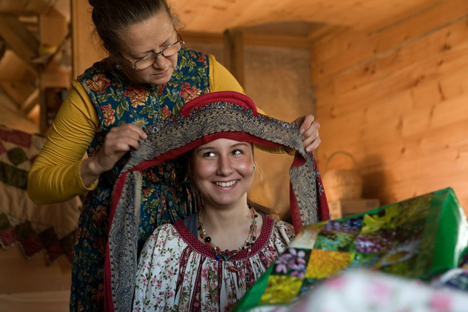 As the skyline of city buildings vanishes and you arrive at the Blagodatnoye family-run estate, you are met with wide and tranquil open spaces. Instead of high-rise buildings on the horizon, the clear sky sinks into the water illuminated by the setting sun.

City-dwellers – doctors, teachers, economists – nowadays are more and more willing to move to rural areas to create family estates there, so that their children and grandchildren can have their own little homeland.

There are six settlements of this kind in the Novgorod region alone and as many as 2,000 in Russia. The neighbors, and local government officials at first treated the new landlords with incomprehension and unpleasantness. A decade-and-a-half later, this attitude has mutated into interest and hope.

Blagodatnoye will be ten years old this summer. Life on this family estate is very different from life in the big city. It involves working together, celebrating together, spending the winter together (however, usually only few families venture to stay there in winter), as well as accepting new members into the estate and new professions.

The principle stumbling-block in the way of creating such estates is acquiring the land. The laws which should govern the organization of such matters have yet to be drawn up.

Land has to be acquired either by the unification of ownership rights in dacha cooperatives, or by restoring abandoned existing villages and setting up personal ownership on their grounds. 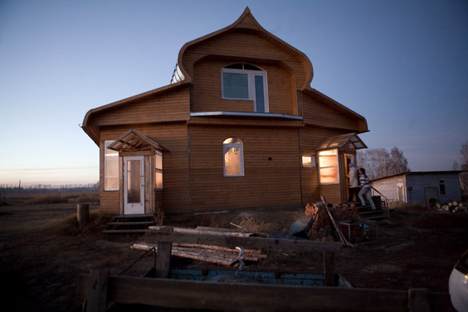 Sometimes people who move to a country estate bravely sell their apartments in town – cutting off their chances of moving back.

It’s generally considered that a family estate ought to be no less than a hectare in area. On a hectare of land there is space for both some woods and a pond, and hedges instead of a fence. Owners need to take care of the soil – no chemicals or mechanized plowing.

This is the only way that such estates can exist as conceived – for the future benefit of not only the family, but the ground too. At the start, potatoes planted at Blagodatnoye didn’t produce a harvest – because the soil had been exhausted.

“Peasants, and collective farmers,” the new estate-owners say, “had an entirely different goal – how to make a profit. They had a consumerist attitude to the land.”

Young settlers Olga and Roman have a family with two children – Alyosha and Alyona. Olga gave birth to both of them at home. Their house has a room, a kitchen, and a conservatory with floor-to-ceiling windows.

“The fitters who installed the windows were puzzled – ‘Like, what, you live here all the time? With no civilization?’” says Roman. “When we asked them to list off what essential things were missing, they shrugged and mentioned a movie theater and a night club.”

The settlement has electricity, families have their own video libraries – especially because television is considered uncool here. Also uncool are alcohol, cigarettes, bad language, and – for many – cooking with meat. 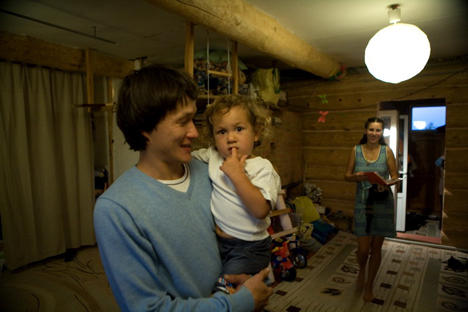 Even so, with their conservatory Olga and Roman can get by without movies – the enormous windows look out onto the Ob Reservoir.

“Even I had no idea things were so beautiful here,” Olga smiles. “We’ve got our own woods growing here. There are buckets of mushrooms growing right under the trees. There’ll be a pond and a garden, and the children can roam around freely. I grew up in a flat – there’s nothing I can remember about my own little homeland.”

The children at Blagodatnoye all have home schooling, just as in most of such family estates. The children of the settlement are taught by parents and neighbors, in accordance with their education levels.

Most of the men living at Blagodatnoye have jobs in the city, but many are seeking opportunities to make a living on the settlement instead. A building team was recently formed.

Valery Popov, one of the team’s members, was formerly a doctor – the head of a department in the city hospital – before going into business for himself. He’s one of the few to come to Blagodatnoye and leave everything of their city life behind them.

Valery remembers how it all happened: “I began feeling that I didn’t do anything worthwhile for people as a doctor, and my career had lost its meaning. I’d put everything in, but the results left me disappointed. Patients had no interest in trying to change their lives, and just left everything to the doctors. So I decided to chuck it in.” 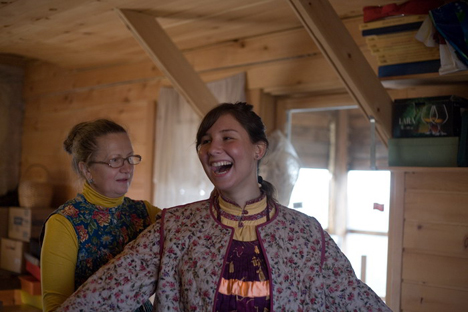 The girl tries on the Russian national dress.Source: Valery Klamm

Valery’s wife Anna is an Economics graduate from Novosibirsk University, and she comments: “Economics is based on the city. We’d like it if Blagodatnoye had its own shared business activity. But that means first deciding what kinds of businesses we would like.

Valery, for example, is interested in bee-keeping. Myself, I enjoy working with young plants, seedlings and seeds. So far it’s all on a pretty amateur level, but we’ve already got a good collection – we’ve got 52 kinds of apple trees planted, and ten of them are already bearing fruit.”

The inhabitants of this paradise settlement have recently opened an artistic studio. Blagodatnoye has many master craftsmen, and tourists began coming here a few years ago.

Visitors can buy goat’s cheese, honey, or linen clothes – you can take a sauna, have an organic whole food supper with the settlers, or even stay the night.

It was almost a century ago that the era of private land-holding ended. Land owned by landowners, and even by peasants was combined, and defined as common land – in other words, it belonged to no-one.

The amounts of viable farmland grew fewer, the farm equipment lay idle and rusting, and birch-trees began sprouting in crop-fields. At the same time dacha cooperatives began appearing in Russia – today people refer to them as the precursors of family estates.

On small plots of land, usually a standard six-hundred square meters in size, people would erect small homes, and grow fruit and vegetables.

It was a hobby that helped families feed themselves in hard times, and dachas provided an opportunity for holiday relaxation without heading off to resorts that were, in any case, inaccessible to many in the years of upheaval. Many pensioners and school-age children would spend their entire summers at the dacha.

On small plots of land, usually a standard six-hundred square meters in size, people would erect small homes, and grow fruit and vegetables. It was a hobby that helped families feed themselves in hard times, and dachas provided an opportunity for holiday relaxation without heading off to resorts that were, in any case, inaccessible to many in the years of upheaval.

Many pensioners and school-age children would spend their entire summers at the dacha.