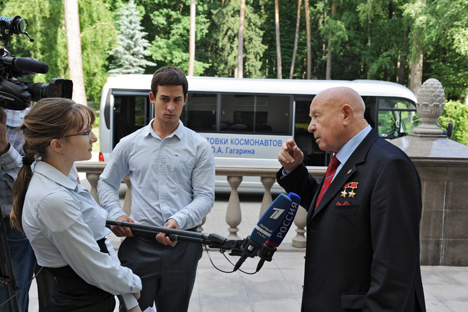 Alexei Leonov (R) during the interview in Moscow, on June 14. Source: RIA Novosti

Alexei Leonov, the first man to walk on space, cites declassified documents and claims that the plane crash that killed Gagarin was caused by another aircraft.

The premier of the film “Yuri Gagarin: First in Space” coincided with the emergence of new accounts of why the first man to travel to outer space died.

On the eve of the film’s release, cosmonaut Alexei Leonov, the first man to walk in space, claimed that the truth about Gagarin’s death had been declassified and that he managed to obtain previously secret documents that showed the cause of the first cosmonaut’s death to be different from what had been officially announced.

A State Commission established to investigate the accident (which Leonov was a part of), concluded that a crew of MiG-15UTI, Yuri Gagarin and experienced instructor Vladimir Seryogin, tried to avoid a foreign object – like geese or a hot air balloon – by carrying out a manoeuver that had led to a tailspin and, finally, collision with the ground. Both pilots died in that test flight.

Leonov, however, claimed that another plane was involved in the disaster. An unauthorized Sukhoi (Su-15) supersonic jet flew dangerously close to the plane manned by Gagarin and Seryogin, Leonov said, citing the declassified report.

“While afterburning the aircraft reduced its echelon at a distance of 10-15 metres  in the clouds, passing close to Gagarin, turning his plane and thus sending it into a tailspin — a deep spiral, to be precise — at a speed of 750 kilometers per hour [470 miles per hour],” Leonov told the RT television channel.

The “truth” about Gagarin’s death, which has allegedly been declassified by the government, is just one version. It is not the most fantastic one, of course – there are also stories about aliens interfering with the flight – but neither is it the most plausible.

Yuri Karash, corresponding member of the Tsiolkovsky Russian Academy of Cosmonautics says, “This is a theory that was put forward about 20 years ago by Leonov and Belotserkovsky, an aerodynamics expert. Someone thought a battery had exploded on board. Someone thought they had experienced a sudden loss of consciousness. Seryogin lost consciousness, the controls got jammed – God only knows.

“My grandfather was a first-class fighter pilot, and when he heard about this theory he would always say, ‘They got into difficulties, went into a spin and couldn’t get out of it.’ If it hadn’t been Seryogin and Gagarin in the plane, there would never have been anything secret about it,” Karash said.

The makers of the latest film about the first cosmonaut are especially proud of the fact that their picture was the first to receive the approval of Yuri Gagarin’s relatives. It is also quite important that the cosmonaut Alexei Leonov was a consultant to the film.

Observers do not rule out the possibility that it was no accident that the new versions of Gagarin’s death coincided with the release of the film.

Alexander Golubchikov, editor-in-chief of the Internet magazine Real Cinema, says this: “These events are probably connected. It’s possible that the film’s producers have somehow made a connection.

But I doubt whether that will help the film ‘Gagarin.’ There wasn’t much advertising, and the cinemas haven’t scheduled it at the most convenient times for the audience. The release of ‘Gagarin’ may have enabled Leonov to talk about his hypothesis and in some way attract attention to it again.”

Leonov did not completely disclose all the details of the declassified documents. For example, he said that he is keeping secret the name of the pilot who was in the second plane. This man would now be more than 80 years old.

Based on BFM and RT.com.