Polluting Baikal pulp and paper mill to be shut 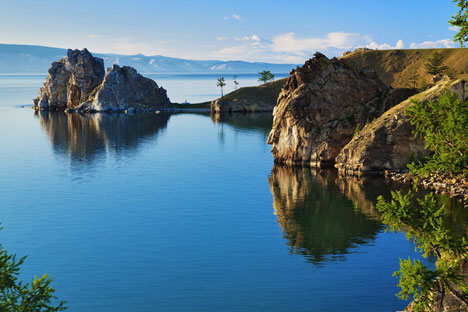 Environmentalists in Russia and around the world have long campaigned against the industrial pollution of wildlife around Baikal and the lake proper. Source: Shutterstock/ Legion Media.

Environmentalists had long campaigned against the industrial pollution of wildlife around Baikal and the lake itself, which features on the UNESCO list of world heritage sites.

Nature conservation campaigners have an occasion to celebrate - the Baikal pulp and paper mill, which has been polluting the world’s largest body of fresh water for decades, will be closed down. Prime Minister Dmitry Medvedev visited the Irkutsk Region this week to declare that the mill would be out of operation in two years’ time and its personnel given jobs in the local tourist industry.

“The government has adopted all fundamental decisions on that score and we shall be acting on them,” Medvedev said at a meeting with local United Russia activists. “There is no way back.”

At a meeting with experts that followed Medvedev reiterated that the decision to close down the pulp and paper mill was an accomplished fact. “It was a no easy decision to make, because there is always a balance of interest between nature conservation and the future of people employed,” he said. “Our task is to resolve the issue in a way that would not harm anybody.”

The main obstructions to the mill’s closure are huge accounts payable, the problem of waste disposal and employment.

Medvedev asked all those involved to stay patient just a little bit longer, until the government finalized a program for the development of the city of Baikalsk, entirely dependent on the BPPM. “We are to have a corresponding plan ready by next summer,” he said.

The prime minister urged steps to develop a special tourism-based economic zone in the region.

Environmentalists in Russia and around the world have long campaigned against the industrial pollution of wildlife around Baikal and the lake proper, which features on the UNESCO list of world heritage sites. An end to dumping wastewater was one of the conditions of putting Lake Baikal on that list.

The Russian government back last February made a decision to gradually close down the BPPM and move operations elsewhere. But, as Deputy Prime Minister Arkady Dvorkovich explained then, the process might last several years. Irkutsk Region Governor Sergei Yeroshchenko speculated that the BPPM might take twelve months to close down, and the elimination of its waste, up to four years.

The Baikal Pulp and Paper Mill was commissioned in 1966. It is the sole major employer for the people of the nearby town of Baikalsk having a population of 17,000.

According to Greenpeace, the BPPM is an outrageously obsolete industrial facility that pollutes Lake Baikal with chlorine and sulfur compounds and also dioxin - a highly toxic chemical. All affect the food chain. The amount of waste dumped annually is estimated at 27 million tonnes.

Attempts at closing down the BPPM have been made not only by environmental campaigners, but by the nature conservation watchdog Rosprirodnadzor. Back in 2007 it ruled that the concentration of some hazardous chemicals in the wastewater was 12 times the tolerance limit.

In 2008 the authorities prohibited the mill from dumping waste in Lake Baikal and ordered it to shift to closed circuit cycle. The BPPM suspended operation, but in 2010 it resumed work with consent from the then Prime Minister Vladimir Putin in defiance of strong protests by ecologists.

In August 2012 Rosprirodnadzor prolonged its permission for the BPPM to dump waste in Lake Baikal for another twelve months.

“The Baikal pulp and paper mill has been operating in absolutely monstrous conditions,” the leader of the movement Ekooborona and the Movement in Defence of the Khimki Forest, Yevgeniya Chirikova, told the daily Moskovsky Komsomolets. “When we took the case to court, we also presented experts’ conclusions. According to specialists’ findings, the BPPM had been polluting Lake Baikal with dioxin. Special funds had been allocated for converting the mill to closed operation cycle, but the money was embezzled. As a result the mill continued to dump wastes up to this day.”

The Russian office of the international ecological organization Greenpeace is very glad about the government’s decision.

“The government has been making promises to close down the mill for more than 20 years, and we do hope that this time the promise will be fulfilled. So far there have been official documents regarding the mill’s closure. The BPPM keeps working and dumping toxic waste,” said the coordinator of Greenpeace’s Baikal programme, Arkady Ivanov.

The BPPM is one of the many ecological problem spots on the map of Russia. In all the Natural Resources Ministry has identified 77 most polluted territories Russia has inherited from the past.