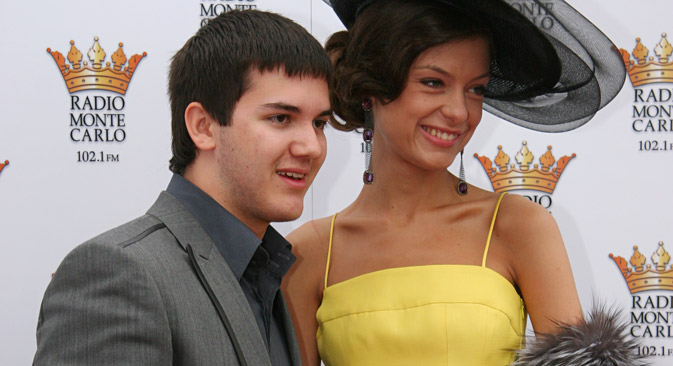 CEO magazine has looked at the children of Russian oligarchs and come up with the names of 88 people who are likely to inherit more than $1 billion each.

At close scrutiny, the СЕО magazine ranking of Russia’s richest offspring is a lesson in the nation’s modern history. The list of oligarchs ready to leave billions of dollars to their heirs includes those who made their fortunes in natural resources (oil and gas), alongside “new-generation” entrepreneurs such as Sergei Galitsky, who has developed a couple of grocery stores in southern Russia into the country’s largest supermarket chain, Magnit.

The Russian billionaires that keep stunning the West with €40,000 ($53,560) dinners and luxury yachts made their international debut only recently – a mere 16 years ago. Russians first made it onto Forbes’ rich list in 1997. Those who managed to survive two economic crises (the national default in 1998 and the global meltdown 10 years later) will leave their children between $1 billion and $13.74 billion. 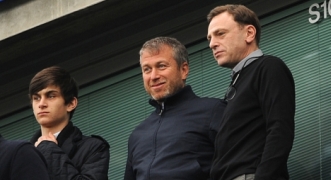 To find out who is in line to get what, analysts at СEOmagazine used their own billionaire ranking and divided each father’s wealth by the number of recognized children.

According to Andrei Shkolin, an expert at CEO magazine, this is why the son from the previous marriage of national rhythmic gymnastics head coach – and wife of Russia’s richest person (according to Forbes)Alisher Usmanov – Irina Viner did not make it into the ranking.

“Neither did we consider parents’ declarations of intent to disinherit their children,” says Shkolin.

The ranking did include the children of Vladimir Potanin, who owns the company Interros and is an active investor in the 2014 Sochi Olympics sports facilities. The billionaire said in 2010 that he would leave his fortune ($12.32 billion according to СЕО’s estimates) to charity foundations rather than to his three children – Anastasia (29), Ivan (24), and Vasiliy (13).

The children claimed at the time that they were not upset: Anastasia works at her father’s company and is active in sports, like her brother Ivan. Both are multi-time aquabike champions of Russia.

Back at the top three, with $13.74 billion, Victoria Michelson not only leads the rankings, but she is also Russia’s most eligible bride-to-be. Victoria is in charge of a modern arts foundation named after her. Her father, a former construction foreman turned head of Russia’s largest independent natural gas producer (Novatek, Gazprom’s main rival), managed to accomplish the impossible.

Having lost of his fortune to the crisis, he not only recovered his losses the next year, but he also made an extra $1 billion.

Leonid Michelson is not afraid of investing in non-core projects, such as the Sibur petrochemical holding or real estate developments. Private oil company LUKoil head Vagit Alekperov is the complete opposite – acting like the hereditary oilman that he is, he prefers not to take any risks. As a result, his son takes second place, with a $12-billion inheritance.

At his father’s insistence, Yusuf Alekperov is learning the ropes of the industry on the ground. After receiving a relevant education, the billionaire’s son has been working at LUKoil’s oil deposits in West Siberia. Starting out as a rig hand, the heir has grown into a technologist. To prevent his son from ever possibly destroying his empire, the father has made it so that his own stake in the company cannot be sold in whole or in part.

The third spot in СЕО magazine’s rating came as a surprise. Sergei Galitsky, a businessman from Krasnodar, has proven that it is possible to make a fortune in Russia not only in natural resources, but also in retail – and from scratch at that. The first Magnit store opened in Krasnodar in 1998. Ten years later, there were 2,500 discount stores all across the country, and, by 2012, the chain became Russia’s leading supermarket.

Galitsky’s fortune is estimated at $8.26 billion. All money will go to his 17-year-old daughter Polina, who recently finished high school. The entrepreneur hopes that she will follow in his footsteps and become an economist.

Mikhail Fridman, who started off scalping theatre tickets and washing windows for money, is one of the list’s more colorful entrants. Only he and Vladimir Potanin have managed to keep their influence and money from the era of Russia’s first president, Boris Yeltsin, when power was concentrated in the hands of his relatives.

Fridman’s assets now include major lender Alfa Bank, leading telecoms provider Vympelcom and the X5 Retail Group – Russia’s second largest retailer after Magnit. His $15-billion fortune will be split between his two daughters, who are rumored to be living in Paris with their mother. 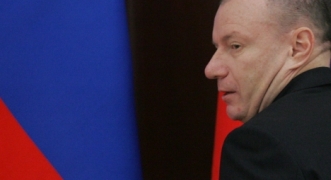 Some oligarchs with expectant heirs have become the staple of tabloids. Suleyman Kerimov, a former economist at a Makhachkala factory who now owns of the Anzhi soccer club, made headlines in France after crashing his €675,000 (around $905,000) Ferrari with Russian TV celebrity Tina Kandelaki in the passenger seat. She was married at the time, and he had three children waiting for him at home – children entitled to $6.29 billion.

Finally, the owner of the Chelsea soccer club, Roman Abramovich, is rightfully considered the most fertile oligarch: His $11.53 billion fortune will need to be split among seven children (five from his previous marriage and two more born to his current flame, Darya Zhukova).

However, the offspring of who was once Russia’s richest man have been losing their standings – together with their father – sliding from the 23-27th spots six years ago to the 60-66th positions now. Nevertheless, the eldest son, 20-year-old Arkady, is already actively following in his father’s footsteps: He owns a company called ARA Capital, with assets estimated by CEO magazine at $42 million. 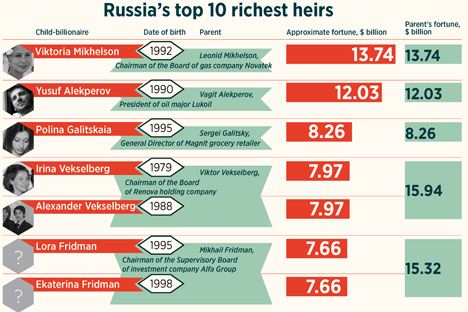