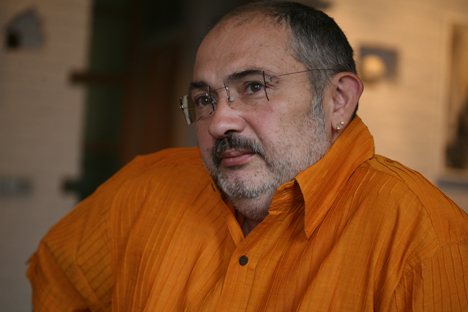 Russian art curator Marat Gelman is fired in the wake of a shocking Sochi Olympics exhibition.

The administration of Russia’s Perm Region has terminated their contract with the head of the Perm Museum of Contemporary Art, prominent gallery director and art curator, Marat Guelman. Elena Oleynikova is currently acting director of the museum.

Some speak about the dismissal as a landmark event: The Guelman era is over in Perm. The Perm culture project, which he launched five years ago, is also officially over.

Cheburashka is a character in children’s literature, created by the writer Eduard Uspensky in 1966 (part of the short story “Gena the Crocodile and his Friends”). Cheburashka has disproportionately large ears and walks on his hind feet.

The gallery director was fired when the local administration became outraged over the display of Siberian artist Vasily Slonov’s works, which were dedicated to the upcoming 2014 Sochi Olympics.

Slonov messed with the image of Cheburashka (the mascot of the Russian Olympic team) and the rest of the Olympic symbols: There is Cheburashka wearing skis and sitting in an outside toilet, Cheburashka shaped like a hand grenade, five skulls replacing the Olympic rings, and a bottle of vodka and two glasses on the steps of the Olympic pedestal.

This irony is harmless, albeit quite dark. Back in the 1990s, cartoons of this kind were published in national papers, but the response was never too emotional. Incidentally, Slonov’s works were exhibited in Moscow and St. Petersburg before being delivered to Perm, and no one seemed to take offense then.

The United States of Siberia founded in Moscow. Source: YouTube

Even so, Perm Duma deputies interpreted the posters as an attempt to defile the shrines. They placed a ban on the display, searches followed, and the possibility of a trial cannot be ruled out.

Guelman’s reputation was a factor. His name has long been associated with provocative and shocking art. Wherever Guelman is, scandal follows. Since the 1990s, he has worked with the most radical action artists, including Oleg Kulik, Alexander Brener, and Avdei Ter-Oganian.

The first is known as a man-dog; the second became famous when he drew a dollar sign on a painting by Kazimir Malevich; the third made it into the history of art by chopping icons with an axe.

The Blue Noses collective (whose “Kissing Policemen” caused a spate of attacks) is also a protégé of Guelman’s. There have been dozens of projects of this kind. They are not sporadic instances of scandalous behavior, but rather a well-thought-out campaign. Guelman has repeatedly said that “freedom can benefit from scandal.”

It would be a mistake to miss the apparent civilizing role of the Guelman project amid the shocks and protests. Perm was probably the worst possible venue for his cultural and social experiment.

Suffering from unemployment, dreadful alcoholism, the harsh Urals climate and having several penitentiaries surrounding it, Perm had been one of the most forbidden Russian cities until quite recently – almost completely forsaken by the central administration.

Perm has seen dramatic changes over the last five years, though. Moscow-based poet Andrei Rodionov, who used to head Guelman’s PR service, says: “More than 2 percent of the region’s budget goes to culture: This is an impossible figure for Russia. There’s the Museum of Contemporary Art. The remarkable conductor Teodor Currentzis has settled in Perm and makes excellent productions. These two items – the museum and Currentzis – must be the best of what is left of the Perm culture project. Given the difficulties we are now faced with, it is a good result.”

Yet there is more to the Guelman project. He has brought prominent poets, musicians and artists to Perm. Guelman is responsible for turning Perm into a nationwide newsmaker. There have been failures, too. The idea of turning the city into a contemporary design center has failed.

“Creative bus stops designed by Artem Lebedev and his studio are crumbling,” says Rodionov. “It isn’t a good idea to place fragile things in areas with a high unemployment rate. We tried to change the face of the city, to make it look fresh.

Talented modern designers would place the wooden letter ‘П’ [the Russian letter ‘P’] all over the city, along with other interesting items, but none were made of stone or iron. Perm denizens come up and touch them, but, since they are made of plywood, they don’t think they are serious.”

“Perm residents are very independent people. They think this way: ‘Artists are trying to entertain us; we don’t really get you, but we don’t mind you crazy people, as long as you don’t have plans to control our culture. We are tolerant when it comes to crazy people, but don’t try to control us.’ Yet an interesting thing happened: When Guelman found himself under pressure and it became obvious that the project was coming to an end, even the local opposition papers demanded that he remain at the head of the local museum. He is a specialist, they said: We do not anyone else. Their logic is simple: We were not asked whether or not we wanted a culture revolution and no one is asking us now whether we want it to end,” Rodionov says.

The Perm culture legacy is among the most ancient in the world. There is a unique collection of wooden sculptures and life-size, finely-carved statues of saints. There is the famous beast style: small bronze masks resembling underwear icons depicting the ancient Finno-Ugric world model.

White Nights festival in Perm brougth together Africa and the Balkans

Public conscience, crippled by the many decades of Soviet power, could barely appreciate contemporary art; but this new art was still perceived.

Even now that the project has come to a close, the process cannot be stopped. The excellent museum created by Guelman will remain. The local residents did not like it at first, but it grew on them.

Perm just recently played host to the White Nights book festival – an enormous event attended by writers from the United States, Israel and Portugal. More than 200,000 people attended the festival.

In July, the traditional civil forum Pilorama, which commemorates political prisoners and victims of reprisal, will be held on the outskirts of Perm. Dozens of musicians from all over Russia are expected to perform.

Guelman will not be in Perm Region by that time, but the civilizing process he started will continue.