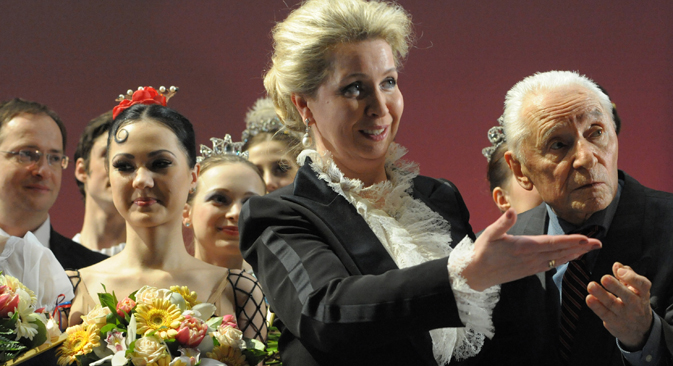 In 2007 the former first lady Svetlana Medvedeva headed the board of trustees of the Moral and Spiritual Culture of the Young Generation in Russia program. Source: Sergei Pyatakov / RIA Novosti

The Western concept of the “first lady,” who is actively involved in charity and backs up her husband’s image, is still alien to Russia. With very rare exclusion, the majority of Russia’s top officials do not welcome publicity around their wives.

Among Russia’s top officials, there is an unwritten rule about minimizing public exposure of their wives. Some information still leaks into the media—mostly in relation to big corruption fallouts and in the wake of the publication of income declarations. However, nothing is known of the charitable activities of the richest wife of a state official, Olga Shuvalova. In 2012, her declared annual income was over 222 million rubles ($6.7 million).

When asked about help coming from these high-profile ladies, one of the biggest Russian charities, Podari Zhizn! (Gift of live!), could not cite a single name: “Somebody must be helping but maybe not publicly, without disclosing this to us or the media.”

Meanwhile, the former first lady, Svetlana Medvedeva, drives civil agenda of a specific kind. Since 2007, she has headed the board of trustees of the Moral and Spiritual Culture of the Young Generation in Russia program. There is no information on any specific projects on the website, but it is stated that the program is aimed at “bringing moral and spiritual content into educational work with young people.”

Apart from this project, Medvedeva has taken part in the organizing committee of the Orthodox cinema festival for children, Luchezarnyj Angel (Radiant Angel).

Heroes of the past

At the moment, it is mostly the wives of former top officials who are visible on the charity scene. Alla Zelenina, married to Dmitry Zelenin (former governor of the Tverskaya region) is head of the charity fund Dobroe Nachalo (A Good Start) and drives regional social projects.

Zelenina is honest about the charity’s origins: “We started this fund in 2003, when my husband was running for the governor’s post, to produce a favorable impression on the electorate inter alia.” As a result, the fund grew into a full-fledged charity fund that is still up and running.

It is easier for governors’ wives to do charity work than it is for ordinary people, even if the governors are no longer in office. “Regional leaders, officials in the administration since the times of my husband’s office—they all help,” says Zelenina. “We are on good terms. They can, for example, give a bus if we need to transport disabled children from a regional center to Tver.”

Audi, Danone, Volzhsky Pekar, and Rosneft are all sponsors of the Dobroe Nachalo fund. “The fund continues growing; the budget has not been cut down. In 2012, we raised 10 million rubles ($304,580). This year will be as good,” says Zelenina.

Olga Reiman (wife of Leonid Reiman, former minister of communications and adviser to former President Dmitry Medvedev) founded the fund “Who, If Not Me?” which helps children in challenging life situations. She says that the family status was not as helpful in the fund development as her work experience.

“We mostly raised funds from corporate donors in difference areas of their own social programs,” says Olga. “As a rule, these were big international corporations, like L'Oreal or PepsiCo, or grants from foreign companies like Goldman Sachs or Credit Swiss.”

“The end of my husband’s term as president’s adviser did not impede the fund's work,” says Reiman.  “Year after year, the same companies—for which charitable activities in the regions with our fund has become a tradition—keep working with us.”

In 2000, Irina Tintyakova (married to the former minister of finance, Alexey Kudrin) set up the fund Severnaya Korona (Northern Crown), which mostly assists orphanages. Tintyakova insists that she never resorted to her husband’s help when looking for and networking with big companies with charity budgets.

She does admit, however, that her status played into her hands. “In big companies—especially foreign ones—nobody would even talk to me if I just walked in from the street. But they did talk to me and help me,” says Tintyakova.

Russian officials’ wives are more than welcome at charities. “On the one hand, officials’ wives are clearly not as well-known as pop-stars and can’t really raise a lot of private funds,” says Olga Drozdova, senior manager at the Social information agency. “On the other hand, due to the specifics of the Russian context, they are very helpful in solving important matters, which can be often more valuable than direct financial aid.”

Asia Zalogina, president of the fund Obnazhennye Serdtsa (Naked Hearts) that was set up by supermodel Natalia Vodyanova, cites the following example: “The legal department of the Center for Therapeutic Pedagogy drafted some amendments to the Civil Code, to align it with the U.N. Convention on the Rightsof Persons with Disabilities. Natalia Vodyanova calledZumrud Rustamova, [who is] married to Deputy Prime Minister Arkady Dvorkovitch, and, with the assistance of the latter, this year the first part of the amendments dealing with the introduction of the institute of diminished capacity has been adopted. We hope that, next year, the second part expanding the forms of guardianship will be adopted too.”