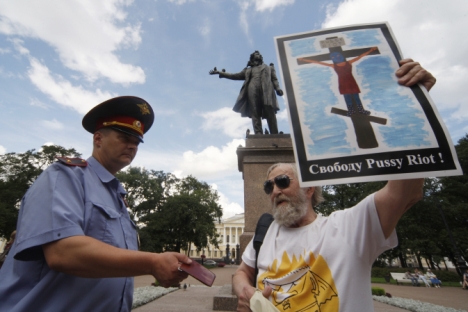 Those who hurt the feelings of believers may find themselves marooned in jail for up to three years, according to provisions of a law that was signed by President Vladimir Putin after endorsement by the State Duma.

A new amendment to the Criminal Code of the Russian Federation states that “actions in public, demonstrating clear disrespect for society and committed with the intent to insult the religious feelings of believers,” will be subject to fines of up to 300,000 roubles ($9,300), or prison sentences of up to one year.

If such actions are committed “in a specially designated place of worship,” then the maximum fine is 500,000 roubles ($15,400), or three years in prison.

An initiative to redefine the insulting of religious feelings and to make it a criminal offence was put forward in the wake of the spring 2012 ‘punk prayer’ that activists of the Pussy Riot punk rock group staged inside the Saviour’s Cathedral in Moscow. In August 2012, a court in Moscow sentenced the three active participants in the action to 24 months in jail for hooliganism. The sentence of one of them, Yekaterina Samutsevich, was mitigated to a suspended term later. The women’s defense insisted in the courtroom on their guilt only under the insult on the believers’ feeling clause that was ranked as an administrative violation at the time.

Amendments to the Criminal Code and the Code of Administrative Offences became integral parts of a campaign for “protecting the believers’ feelings”, launched in the State Duma in last September. The MPs issued a resolution then calling for a “drastic response to the forces that extol antireligious extremism,” including a response at the level of legislation. They received support from representatives of all the four traditional religious denominations. The latter said that punishments for insulting believers should be upgraded to the maximum possible. Their statements were made in the wake of a chain of instances of Cross-felling in Russia, which had been triggered by the Pussy Riot action, and riots in the Islamic world detonated by the release of the ‘Innocence of Muslims’ movie in the West.

The bill sparked off harsh debates in Russian society back at the times of its drafting and discussion. Proposals to tighten up the punishments made many human rights activists and lawyer rancorous. They warned that the novelties will not only fail to spare society from religious confrontations but will only add new fuel to them. Any criticism of the Russian Orthodox Church or other denominations may quickly bring up criminal responsibility, rights and law experts said.

Specialists on the Presidential Council for Human Rights made recommendations to renounce the criminal responsibility for affronting people’s religious feelings.

Russia’s Public Chamber also withheld support to the bill saying it contradicted the principles of the Constitution and international legal acts. “I’m sure there’ll be loads of abuses because previously all the mechanisms for protecting religious shrines were concentrated in the Criminal code, while the Administrative Code specified defence of feelings, and this law is obviously being passed to slash every possible type criticism, first and foremost, the one addressed to the Russian Orthodox Church,” Alexander Verkhovsky, an anti-extremism observer at the Sova legal centre told Kommersant daily.

Russian Orthodox activists have been regularly campaigning in the past few years against those who they believe affront the Church. Contemporary artists top their lists of abusers more often than not.

“Quite possibly, the Prosecutor General’s Office, the Russian Orthodox Church and all sorts of nationalistic Orthodox organizations will get an efficacious tool for fighting against contemporary arts and will thus beef up the artists’ levels of self-censure,” Yuri Samodurov, the former supervisor of the ‘Beware Religion’ exhibition, who was sentenced in 2005 under Article 282 told Kommersant.

“Introduction of a law like this one may drive the situation to the point of absurdity,” political scientist and gallery owner Marat Gelman told the Argumenti i Fakti weekly. “Even if you don’t dance inside churches and don’t wear T-shirts with anticlerical slogans, one or another believer may find your exteriority to look as an effrontery.”

Gelman said he agrees that the actions like the Pussy Riot’s ‘punk prayer’ in the Cathedral of the Savior should not be encouraged but it is worthwhile recalling that excessive persecution of participants in them only mobilizes more public attention. “Did anyone know about the poorly crafted movie ‘The Innocence of Muslims’ until it was outlawed?” Gelman asked with a somewhat rhetoric note.

“Once this outlawing took place, many people decided to watch it. That’s a silly law and I don’t think actually it will be executed in reality but anyway it’s an instrument for putting others under pressure and to turn people loose against others by saying, well, look, he insults your religious feelings,” Nezavissimaya Gazeta quoted Alexei Malashenko, a research fellow of Moscow Carnegie Centre.

Moscow Patriarchate welcomed the adoption of the law but said it might be still more stringent. “These measures are even too mild,” the Reverend Vsevolod Chaplin who chairs the Synod’s Department for Communications between the Church and Society said in a comment on the three-years-behind-bars provision.

“We’ll hope this measure will be applied in case of actions fraught with bloodletting,” he said.

In the meantime, a group calling itself Pravoslavny Patrul  (the Orthodox Vigil) has emerged in the social networks. It urges the users of the Internet to report on all cases of violations of the new law.