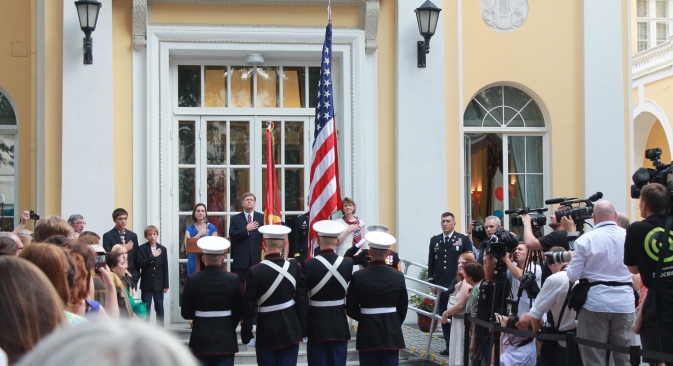 As the U.S. marks its 237th Independence Day, U.S. Ambassador to Russia Michael McFaul brings together Russians and Americans at his official residence, Spaso House, to foster some public diplomacy.

Shortly before his arrival in Moscow, McFaul celebrated Independence Day at the White House with President Barack Obama.

“We celebrated this holiday in the White House without suits and ties in [an informal atmosphere],” he said in Russian at Spaso House Thursday.

These words came shortly after the singing of the Russian and American national hymns by Russia’s Minnin Choir and a U.S. military honor guard.

McFaul’s next step, taking off his tie and suit jacket, immediately created a less formal atmosphere. Several (but not all) of the Russians and Americans gratefully accepted the challenge to be casual.

“Today we don’t see fireworks, but we listen to nice music and enjoy communicating with people,” said McFaul.  “I am very grateful that I live in a democratic country and I am also very grateful to those who work to spread democracy.”

Read RBTH blog: A piece of America in Russia

Attendees discussed how the United States and Russia might use such events to improve dialogue and bilateral relations.

One guest, Vladimir I. Lebedev, assistant to the ambassador-at-large of the Russian-American Presidential Commission, said he believes the celebration of U.S. Independence Day in Moscow and celebrations of Russia’s Independence Day in America are tools to strengthen ties between Russian and American diplomats and officials.

“With Bilateral Presidential commission and its 21 working groups we are having a good chance for developing constant dialogue between our countries,” he said.

Lebedev said that thanks to the U.S. Independence Day Russia could learn more of how to respect its own history and commemorate such events as much as possible.

The president of American University in Moscow Edward Lozansky argued that July 4th events in Russia are a good example of public diplomacy and encourages people-to-people contact.

“Communicating in a spontaneous atmosphere allows you to find new ideas, new contacts, get in touch with new people and resolve common problems,” he said.

“Bringing together people, organizing different concerts and creating an enjoyable atmosphere for people– that is what public diplomacy means.”

Bernard Sucher, a member of the board of directors at Aton Group agreed.

“Of course, it’s a great opportunity to bring people together and share something that has tremendous significance for the United States,” he said.

“It’s also a tribute to the host country, Russia – with the playing of its national hymn.  It’s an indication that Americans who work in this community appreciate the guests who came today to Ambassador McFaul. I think everybody will reflect a little bit on what led to the Declaration of Independence and what consequences it had for the world.”

Joel Ericson, Director of the Fulbright Program in Russia, echoes his view.

"U.S. independence day can be a tool of public diplomacy because it fosters a discussion of values and the relationship of citizen with state," he said.

"Americans value individual freedom although we ourselves disagree and discuss what freedom means in terms of the citizen’s relationship to the state. It is useful for other citizens of other countries to know that we Americans do not always agree on the relationship between citizen and state but we have a flexible enough system to allow for disagreement, at least most of the time."

William Galston, a senior fellow at The Brookings Institution and an expert in governance studies, wrote in an e-mail message to RBTH that the “language of the U. S. Declaration of Independence is the key to understanding America's enduring political culture. If Russians can understand why Americans cherish individual liberty and insist that legitimate government rests on the consent of the governed, our bilateral relationship is more likely to rest on a solid foundation.  Of course, the reverse is the case as well: We Americans must understand the most fundamental Russian beliefs as well.”

“This does not mean that we will agree with them,” he added. “Our Declaration of Independence is cast in universal terms: all men are created equal, not just Americans, and all have the same rights, which they are entitled to enjoy.”

When asked about historic lessons that both countries could learn from Independence Day in the U.S he said, “there is a big difference between overthrowing the old order and establishing a stable, effective, and liberty-respecting governing system in its place.”

“The American Revolution began in July of 1776, but the Constitution did not begin operating until 1789,” he explained. “The intervening years were filled with war, ineffective governing institutions, and divisive political controversy.”

The article is first published in Russia Direct.