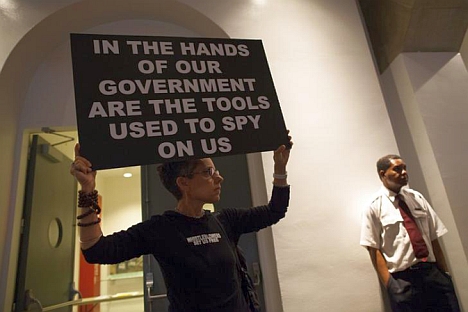 A woman holds up a sign at a support rally for Edward Snowden, a former NSA contractor who leaked documents to media outlets revealing the U.S. government's top-secret phone and Internet surveillance programs. Source: Reuters

The real objective of the "digital sovereignty" plan is to obtain the technical capability to quickly establish the true identities of Russian account holders on social media sites and monitor in real time their online activities.

It would be perversely ironic if Edward Snowden's crusade against the U.S. government Internet surveillance programs resulted in less Internet freedom in Russia.

State Duma deputies reacted with outrage to Snowden's revelations that U.S. Internet giants like Microsoft, Apple, Google, Facebook and Twitter provided the National Security Agency with information on their foreign clients' online activities. Sergei Zheleznyak, deputy Duma speaker from United Russia, promised to introduce legislation that would protect the personal data of Russian citizens by requiring international Internet companies to locate their computer servers under Russian jurisdiction as a condition of continuing their operations here. He called this a defense of Russia's "digital sovereignty."

Spying on foreigners, as opposed to spying on your own citizens, is not a violation of human rights or a breach of international laws. It is called collecting foreign intelligence. For any intelligence service, foreigners and their personal communications are fair game. It's what taxpayers pay their spooks to do.

Civil servants’ use of Gmail, Facebook may be deemed ‘high treason’

Sharing personal data with an Internet service is a private decision. If you want to use the service, and you agree to share your personal data as a condition of usage, there is nothing for the government to "protect."

The real objective of the "digital sovereignty" plan is to obtain the technical capability to quickly establish the true identities of Russian account holders on Facebook, Twitter, Gmail, YouTube and Skype and monitor in real time their online activities. Or to create legal grounds for forcing the U.S. Internet giants out of the Russian market if they do not comply. On similar pretexts, China bans Facebook and Twitter, while Google withdrew from the Chinese market in 2010.

The desire to create a Russian version of PRISM reflects the government's concern with the quick mobilization capabilities that U.S. social networks provide to the opposition. Deputy Prime Minister Dmitry Rogozin and FSB Director Alexander Bortnikov have publicly warned against the subversive influences of foreign social networks. Others called for banning the use of Gmail by government employees.

Building up domestic cloud storage and restricting the use of foreign cloud services at sensitive government agencies are reasonable ideas. Harassing international Internet giants into facilitating spying on Russian citizens is not. "Digital sovereignty" will not protect our privacy but will limit our choices and freedom.

Vladimir Frolov is president of LEFF Group, a government relations and PR company.