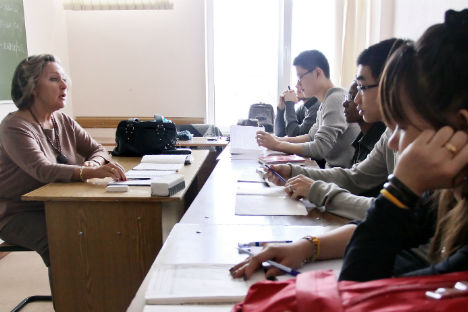 The Russian budget will annually aid the education of up to 15,000 foreign students from 150 countries.

More foreign students are expected to enrol in Russian universities, with the Russian government looking to facilitate entrance procedures and provide financial aid.

Students from abroad who have completed their secondary education and wish to study in Russia will soon be able to take Russian university entrance exams without coming to the country. The Russian Ministry of Education and Science has developed the relevant bills and instructions and will have a public hearing in the autumn. By 2018, the share of foreign students in Russian universities is projected to increase to 10 percent.

“Our objective is to provide foreign university hopefuls with access to Russian entrance procedures at their place of residence,” a spokesperson for the ministry says. Up to 15,000 foreign citizens from 150 countries will be enrolled in Russian universities on a budget-funded basis annually.” They will take exams in Russian science and cultural centres, but in their own countries. There are 70 centres of this kind in the world at present and this number will rise to 104 centres by 2020; however, the procedure for taking exams remains vague, says Sergei Roshchin, pro-rector at the Higher School of Economics.

A package of documents will have to be drawn up by November to regulate the entire educational ‘life cycle’ – application, selection and admission, as well as transfers between classes and courses (a student may be expelled or transferred to a different university).

Foreigners prefer technical universities, which account for 20 percent of the total number of foreign students. 18 percent of foreigners enrolled in Russian universities train to become economists, lawyers and doctors, while only 11 percent will become programmers and teachers.

The project will only be successful if Russian universities recognise graduation certificates issued by foreign schools. The new law on education, which comes into effect in Russia on September 1, will introduce automatic recognition of foreign education certificates and qualifications if Russia has a bilateral international agreement with the country in question; otherwise, foreign pupils will have to be reviewed by the Federal Service for Supervision in Education and Science.

Gulnara Krasnova, pro-rector for international activities at the Peoples’ Friendship University of Russia, told Izvestia that foreign school graduates would be able to take entrance exams to enrol at Russian universities without coming to Russia.

“They will take exams at Russian centres in many countries of the world. The best school certificates will enable foreign graduates to apply to a Russian university. If the application is approved, the graduate will take exams at home and then go to Russia,” Krasnova says. Some universities with international agreements invite foreign graduates or accept online applications, she adds.

Viktor Grishin, rector of Plekhanov Russian University of Economics, supports the initiative, but thinks that the ministry is still up against a serious challenge.

“The idea is excellent, but there’s a lot of work that needs to be done. We must compare levels of education in Russia and various countries. This project requires care and responsibility,” Grishin says.

Based on Izvestia and Kommersant articles.