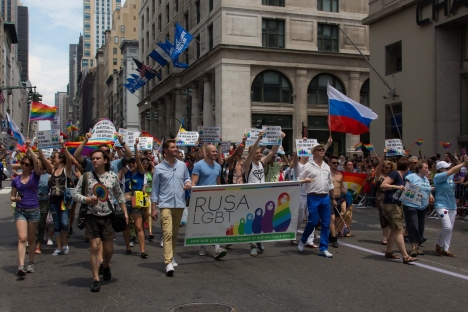 The Russian-American LGBT community celebrates equal rights in New York while expressing concern about their peers at home.

One month ago, on June 11, Russia’s State Duma passed the law banning the “propaganda of non-traditional sexual relationships among minors.” On June 26, the U.S. Supreme Court ruled that the federal same-sex marriage ban (called DOMA, the Defense of Marriage Act) was unconstitutional. The court declared that legally married same sex couples deserve equal rights to benefits under federal law.

In the wake of these historic events, it has become clearer than ever that the two countries are moving in divergent directions. RBTH spoke to the Russian-American gay community in New York about their reaction to recent events, their expectations for the future in the United States and in Russia, and the concept of gay pride.

Russia's Federation Council supported the anti-gay legislation, and on the last day of June President Vladimir Putin signed the law. That led to rallies by both LGBT (Lesbian, Gay, Bisexual and Transgender) and anti-LGBT activists in which dozens were arrested.

In New York, the fall of DOMA brought a kind of euphoria to the streets, and the spontaneous festivities lasted for days. The most prominent was outside the New York landmark Stonewall Inn, where the most famous gay riots occurred in 1969. The Stonewall riots became known as a critical turning point for gay rights in the country.

Many of those celebrating in recent weeks were Russian-speaking New Yorkers from a variety of former Soviet republics.

Ivan Savvine, 29, an art historian and curator born in St. Petersburg and based in New York, said he came to the Stonewall Inn to celebrate the historic victory for the LGBT community as some of his work is directly connected to the LGBT rights causes.

“This is important for me as I am a gay man, a recently naturalized citizen of the United States. The decision by the Supreme Court finally eliminated federally mandated discrimination against LGBT people across the U.S.” Savvine said.

Savvine celebrated with several friends who are now finally able to petition for their foreign same-sex spouses to obtain legal status in the United States. “It was especially heartwarming to see my new motherland reaching this new frontier in human rights,” he said.

Evgenia, 32, a sales representative who grew up in Moscow and now lives in New York, did not want to give her last name. But she added that she wanted to share her happiness with other people. “I had an urge to feel myself a part of this historic moment, and I knew exactly, where to head... Stonewall Inn is a legendary place, the symbol of the gay rights movement. So I went there and ran into many of my friends without making any plans to meet them there.”

Most Russians want 'gay propaganda' to be banned - poll

Russian-born Julia, also 32, is currently awaiting her work permit. She said she would like to stay in the U.S. and is cautious about returning to Russia for any length of time. “In Russia, it seems, the decisions of such kind are made in spite of the American ones.” When asked if the political climate in Russia affects her desire to return home, Julia said “It is getting scary and more unpredictable” to be gay in Russia. She added that she would only go short-term to visit her relatives.

The historic Supreme Court ruling came just a few days ahead of the annual New York Gay Pride parade that took place on the last day of June. It definitely affected the spirit of this year's festivities.

The anti-gay propaganda law also had an impact, and members of the Russian-American LGBT community promised to continue to demonstrate against the Russian law.

New York Mayor Michael Bloomberg opened the parade on his motorcycle with a group of bikers, and Edith “Edie” Windsor, known for her challenge of the DOMA act, was one of the parade's marshals.

The Russian-speaking activist group RUSA LGBT marched officially for the first time in 2012. This year the group doubled its presence with about 150 participants from Russia, Ukraine, Belarus, Kazakhstan, Uzbekistan, Turkmenistan, Moldova and Latvia. Their flags proudly waved over the parade crowd, which was in the tens of thousands, even after it started raining around 3 p.m.

One of the RUSA LGBT chief organizers, Ukraine-born Yelena Goltsman, has lived in the United States for over two decades. She said the difference between the parade day last year and this year is dramatic. “We just got full citizen rights in our country, and it's such a great feeling. We are very happy! On the other hand we are almost feeling guilty before our friends in Russia and [formerly Soviet] countries because of what's happening there with LGBTQ rights... It looks to me like a kind of a Berlin Wall is growing around Russia, the wall of silence.”

Well-known in Russia and abroad as a writer, artist, photographer and director, Alexander Kargaltsev came to the United States from Moscow in 2010 when he was granted a scholarship at the New York Film Academy. He also applied for political asylum.

Kargaltsev has told the New York press about clashing with Moscow military police during gay pride rallies. His 2012 exhibit, “Asylum” featured a series of photographs of naked Russian gay men--their nudity symbolizing their status as refugees.

Kargaltsev said he was impressed that the city and major corporations were involved in New York’s gay pride. “Such entities as CITIBANK, Google and the New York Police Association are marching in the parade. In Russia cops are dispersing the marchers and here they are marching together – this is a triumph, a victory of liberal thinking. I think Moscow definitely needs a pride parade,” he said, adding, “That’s the only way to move forward.”