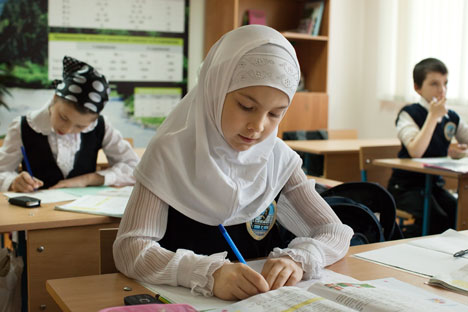 The Stavropol Territory Court ruled that religious attire in school would be in conflict with the secular nature of Russia's educational system. Source: ITAR-TASS

The regional Court of Stavropol, home to a considerable Muslim community, adopted last week a ban on hijabs. Students in the North Caucasian city will no longer be allowed to wear Muslim headscarves at school.

On July 10 the Russian Supreme Court ruled in favor of the Stavropol Region government’s decree, which bans Muslim girls from wearing traditional headscarves (commonly referred to as hijabs) to school. The ruling rejected a complaint filed by a group of citizens, who had asked to pronounce the decree illegal and void. On the one hand, freedom of faith has been upheld, but, on the other, the need for maintaining the secular nature of the state and its institutions has been affirmed.

“The decision of the Stavropol Territory Court on the legality of the regional government’s decree has been left unchanged, and the appeal has been rejected,” said Supreme Court Justice Valentin Pirozhkov, reading out the ruling.

Read more about Islam in Russia

The conflict started back in October 2012, at a rural school in the Kara-Tyuba village in Stavropol Region, where the principal prohibited female students from wearing Islamic headscarves. The girls were advised to replace them with regular headscarves, but their parents refused and filed a complaint with the prosecutor’s office.

The debate escalated to the federal level. As a result, President Vladimir Putin spoke against wearing hijabs to school and supported the idea of reintroducing school uniforms.

Ismail Berdiyev, chairman of the Coordinating Center of North Caucasus Muslims, explains that people often confuse the hijab [a baggy veil that covers a woman’s entire body] and the headscarf: “Our women don’t wear hijabs, they wear a special kind of headscarf. The hijab covers the entire face, leaving only the eyes visible. Not only can they be banned—they must be banned. Girls of full legal age must wear a headscarf, but schoolchildren are not required to wear them.”

Berdiyev adds that, besides the headscarves, there are no other special requirements for Islamic clothing. “For example, highlanders from the Caucasus used to be required to wear a dagger, and that’s something that should have been banned—but nobody wears them anymore. Men must cover their body from navel down to the knees. Women can have their face, hands and feet uncovered,” says Berdiyev.

Bishop Sergei Ryakhovsky, chairman of the Russian Evangelical (Pentecostal) Association and co-chairman of the Advisory Council of Protestant Churches in Russia, agrees with the Supreme Court’s ruling and believes that the secular nature of the state should not be challenged. “If every respected religion started promoting its clothing principles in public schools, the state’s secular foundation would be eroded,” he is quoted by RBTH as saying. “This ruling was awaited with anticipation in other regions, and, had it been different or less definitive, various interpretations would likely have arisen.”

“We would like to observe society’s response to this issue, using Stavropol Region as an example,” the bishop says. “This is a unique region where an attempt is being made at changing the cultural way of life, the cultural code. The Supreme Court ruling was totally fair. Perhaps we should start thinking about a unified school uniform.”

“Representatives of the Muslim faith argue quite reasonably in favor of wearing headscarves. So, if they have certain distinctive features in their clothing, what are other religious communities to do? What should Protestants that wear secular clothes do? Or what if Buddhists or Krishnas started going to school in their specific clothing? We have to admit that hijabs stand out the most,” says Ryakhovsky, adding that everyone was free to wear traditional clothing at home, at a place of worship, in the street or at Sunday school.

The Supreme Court’s ruling took Alexander Verkhovsky, director of the Sova Center for human rights, by surprise. “Many girls wear this kind of clothing all around the country, but this reaction was related to the associations that such religious signs evoke in that particular region. Apparently, Stavropol Region residents are scared by the number of Muslims. Now it’s the headscarf, and, before you know it, they will be scared of something else,” the expert says.

According to Verkhovsky, it would have made sense to single out the headscarf if a school uniform had been mandated. “How exactly are the Ministry of Education and the Prosecutor’s Office supposed to distinguish between a religious and a secular headscarf? What if a girl comes to school wearing a traditional Orthodox Christian headscarf tied in a knot under her chin? What if somebody didn’t like a Jewish skullcap or short pants? For instance, Salafi Muslims wear short pants, and people in some places in Dagestan are not happy about it,” he says.

Verkhovsky is convinced that religious children can and must attend secular schools. “Under such circumstances, the kids will probably be taken out of school, and we will deprive them of a normal education. Plus, this may lead to such children being pushed back into a kind of ghetto, which is always a bad idea. Kids with unconventional views must be integrated in the common environment,” says the expert.

In the wake of the announcement of the Supreme Court’s ruling, similar requirements for the appearance of schoolchildren have already been introduced in several other regions, including Bashkortostan, Adygeya and Dagestan.