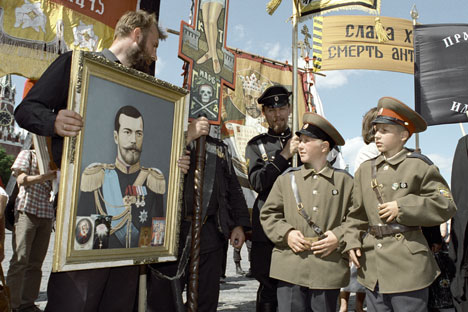 Russians from different generations relate to the country's last emperor in different ways.

Russia has been marking the 400th anniversary of the Romanov dynasty, whose rule ended dramatically and tragically after the Bolshevik revolution of 1917.

How do modern Russians view the royal legacy and what are their perceptions of the last Tsar, Nicholas II? Public attitudes towards him have undergone several shifts since the collapse of the Soviet Union two decades ago, with the most recent studies showing an increase in appreciation of the monarch.

Nicholas also had the lowest negative rating among those questioned.

President Vladimir Putin recently asked Russian historians to develop a cohesive – or as he put it “consistent” – history of Russia for use in school textbooks. How Nicholas's rule will be judged is not yet clear. Consequently, the 400th anniversary of the House of Romanov house is being celebrated quietly this year, without a major cultural or official program.

At the same time, the Kremlin has opted for prominent commemorations of another jubilee, the approaching centenary of the beginning of World War I, since military issues and the “prowess of Russian weaponry” is easier to fit into the present ideological requirements.

Russia has yet to reconcile fully with its past and its history is not so much a “home” as a “battlefield”. Perceptions of the last Tsar already look different when compared with a survey in 1994 that asked which past leader could be regarded as a true Russian patriot. Only 5 percent of respondents chose Nicholas II, who did not even make the top ten.

The assessment of the royal family in the immediate post-perestroika era focused mainly on the fate of Nicholas and his family and servants, with people seeing in this tragedy a harbinger of the entire subsequent history of Soviet repression and mercilessness, even toward children. There was no great interest in his rule as a whole or in his politics. His image as a melancholy and politically weak leader went unchallenged.

Then, under the influence of the émigré Russian Orthodox Church Outside of Russia, a reverence for the last emperor as a saint started to spring up in some parts of the country. The Moscow patriarchate still opposed canonization in the early 1990s and it refused to accept conclusively the authenticity of the remains of the royal family that had first been uncovered in 1971 by the Ryabov-Avdonin group.

The last ball of Romanov dynasty

As the 1990s progressed, Nicholas’ image began to take on new meaning. Society became more divided after Yeltsin’s election to a second term in 1996 as hopes dissolved for a rapid integration with the West after the collapse of Communism.

Nicholas II became an important symbol for the conservative opposition, who regarded him as a sacred figure protecting the Russian people and their faith from a godless Western civilization. Nicholas's political moves were interpreted within the framework of a global fight to preserve the only true Christianity, the belief in Russia as “the Third Rome.”

The royal family was discussed in the press throughout the 1990s after Yeltsin formed a commission in 1993 to identify their remains. In 2013Patriarch Kirill suddenly issued a statement declaring that new information had appeared. Although the site of the royal family's initial burial at Ganina Yama, outside Yekaterinburg, became a destination for pilgrimage, it is possible that those who declared the true burial place to be the nearby Porosenkin Ravine will be considered correct.

For Yeltsin, Nicholas's fate also had a personal aspect. He was a Communist party official in Sverdlovsk when the decision was made to destroy the building (Ipatiev House) in which the royal family was shot. He thus attached significance to the historical image of Nicholas II and his family.

With Putin's rise to office, the topic of Nicholas in the Kremlin's “political memory” diminished in importance. Putin initially showed little interest in the pre-Soviet period of Russian history. He had inherited a fractured society from Yeltsin, who had not managed to erase quickly the legacy of Communism as other countries of the former “Eastern Bloc” had done.

Putin tried during his first term to build a policy of symbolically ending the “long Russian civil war of the twentieth century,” reconciling the “Whites” and the “Reds.” On the one hand, he restored the old Soviet anthem. On the other, he associated with Solzhenitsyn, who had monarchical leanings, and reburied in the Danilov Monastery the remains of White generals who had died in exile.

After 2005, when he had strengthened his political regime, Putin and his administration doggedly tried to assemble a sort of combined pantheon of symbols of Russian greatness. In it were placed Alexander Nevsky; Stalin; Lenin; Yuri Gagarin; the most popular Russian saint, Seraphim of Sarov; and Marshal Zhukov. Nicholas II also ended up in this pantheon. Putin's affinity for creating a “civil religion” from symbolic events and figures of the past turned out to be more successful than in Yeltsin's era.

But reaching this point was costly, since the issue became not the treatment of history for “civil society” but rather for the “subjects of an enlightened despotism”. The second half of the decade teemed with TV debates on the greatness of Stalin and his generals. Russian history again began to be construed as the history of a “strong power.” Putin's approach to history lacks warmth. He relates to it more in a “managerial” and technological way.

Therefore, nowadays Nicholas II - as the last emperor, as the carrier of a special understanding of Russian power - does not stand out among other Russian rulers. For the contemporary Russian semi-official press, the victory in World War II and Stalin's role are much more important than the economic progress during Nicholas II's era.

The image of Nicholas conveyed by this semi-official press is now only one of many of the predecessors of Putin's “enlightened despotism”. And the Tsar, of course, is not the most successful of them, since he could not prevail against the “troubles”. Nevertheless, he falls into the honorable ranks of modern Russian anti-liberal symbols.