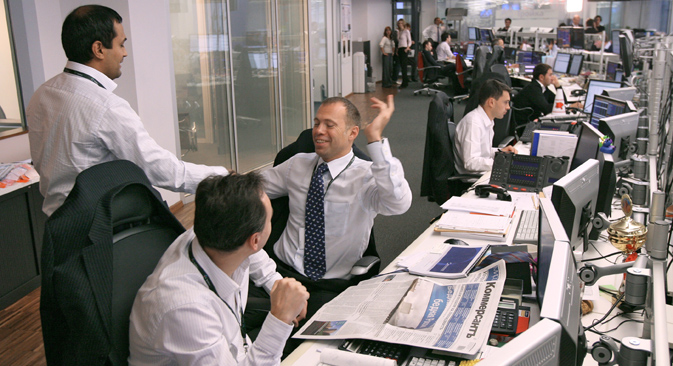 Russia is already suffering from a shortage of IT workers, though Moscow and St. Petersburg, even though these two cities produce the biggest numbers of IT graduates. Source: Kommersant

Russian institutions produce too many lawyers and economists, not enough IT specialists.

Almost 6 percent of Russian university graduates register at the unemployment office immediately after graduating. Lawyers lead the way in this area. There is also an excess of economists, real estate agents, travel managers, civil engineers, bankers, teachers and psychologists. Russian universities are still geared toward meeting demand from would-be college students rather than from employers—because students paying their way through college are a source of additional revenues.

POLL: More than half of Russians would like to work in govt sectorl

Discussions about Russia’s higher education system being outdated have been going on for years. Company executives complain that graduates are unable to apply the theoretical knowledge they receive from the university; companies then have to retrain these graduates on the job.

“This takes a huge amount of time. We have to ask experienced employees to explain the theory to them or redo their work, wasting our professionals’ valuable time. The company hopes to compensate for those losses in the future, but, in reality, 90 percent of young hires quit and join other organizations. It’s only possible to retain them by raising their salaries; there’s no gain in the end, so hiring inexperienced staff just doesn’t pay,” says Elena Kotova, HR manager of the Labirint Group.

Still, the number of firms that can only offer a low salary and target only young graduates has been on the rise. For instance, whereas new graduates could only count on 2 percent of total job openings in 2009, this percentage had risen to 8 percent by last year. Such companies suffer from a high staff turnover and offer low pay, but they also provide an opportunity to apply theoretical knowledge in real life.

According to the HeadHunter website’s statistical data, paralegals are the lowest paid graduates on the market, with a starting salary of around 23,000 rubles (around $710). Data processing professionals can count on a slightly higher of 25,000 rubles ($770).

“There’s a surplus of lawyers in our country. Last year, we were receiving nine resumes for every opening. With competition like that, it’s hard to find a job that matches your education credentials,” says Irina Sviatitskaya, manager of the career.ru job search website for recent university graduates.

Although Russian universities have trained a lot of economists, their occupation remains among the most sought-after, as well. “In fact, economists are hired to work as sales reps, and there’s always demand for them,” Irina Abankina, director of the Higher School of Economics’ Education Development Institute, says. “Economists have broad qualifications and can work in different positions, from managers to analysts.”

Sales and finance offered the biggest number of positions for new graduates last year—11 percent of the total.

From the employers’ perspective, call center operators and data processing clerks were in the highest demand, with fewer than two applicants per position. This shortage, however, is due to young people with a university degree being reluctant to man phone banks.

According to experts, the shortage of potential recruits in this sphere will widen to 320,000 by 2015. With around a million people employed in IT, the sector accounts for just 1 percent of Russia’s total GDP. In advanced economies, this indicator is closer to 4 percent.

“IT is the fastest growing industry right now. Russia is already suffering from a shortage of IT workers. This is felt most acutely in Moscow and St. Petersburg, even though these two cities produce the biggest numbers of graduates, year after year,” says Abankina.

The Russian economy needed 80,000 new IT workers in 2011, but it only received 70,000. In addition to IT specialists, environmental engineers and nanotechnology professionals will be in demand in the immediate future.

Yet Russian higher education institutions are not prepared to realign their priorities to meet the job market demand. They are counting on the money and whims of shortsighted students, as well as on state-sponsored quotas that cannot eliminate shortages in all fields.

Alexander Adamsky, science coordinator of the Evrika educational center, is confident that it is parents who choose future occupations for children when they leave school, without taking objective factors into account.

“Adults who are guided by their own experience, stereotypes, and even prejudices make the decisions on their children’s behalf. Yet the current situation is more complex than it was back in the Soviet era. Today, it’s impossible to guess what occupations will be popular with employers,” the expert says.

“As a result, parents want their children to receive a higher education in any area and then find a job they like. This theory is corroborated by the fact that many successful people work in fields that have nothing to do with their education,” says Adamsky. According to him, a professional education is not, in fact, an integral part of a successful career.