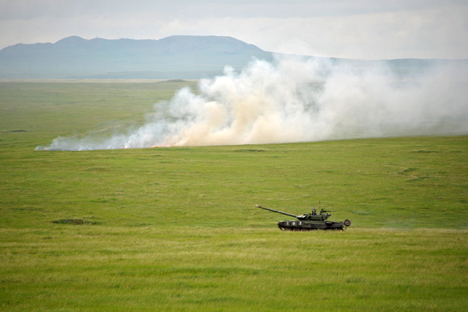 A Russian Army Engenering tank drives near the Baikal Lake in Russia, on July 17. Russian has launched its largest military drill since Soviet times, employing 160,000 troops and around 5,000 tanks across Siberia and the Far East Region. Source: AP

Military exercises have revealed what is really going on in the Russian army. For the first time, army heads have admitted to drawbacks identified during the drills and are reporting on their progress in bridging the gaps.

Another phase of the largest challenge inspection in the history of the Russian armed forces ended on July 20. The exercises are being conducted to assess the preparedness of the country’s military in all three major areas: the competence of its personnel, material support and battle command.

Since last winter, every single branch of the Russian military has been subjected to drills of varying degrees of complexity. Thanks to this, the country’s leaders now have a clear understanding of how well the Russian army is prepared for combat.

The latest drills started on July 13 and involved about 160,000 staff, more than 5,000 equipment units, 70 vessels and support ships, and 130 aircraft and helicopters.

“Overall, [the last stage of the drills] included over 150 tactical, special, and special-tactical exercises, involving various troops and army units. We were able to resolve the issues of logistical, engineering and medical support,” the Russian Ministry of Defense announced in a statement on its website.

How well the Eastern Military District did during its drills will be established at a later stage; however, from what is known now, it is clear that the mission was a success and a number of impressive results were achieved.

Russian President Vladimir Putin, who visited the troops during the final leg of the inspection as the country’s commander in chief, was brief but eloquent in his assessment of the skills demonstrated by the military: “… Not a single major violation, the discipline is there… The mark [the army deserves] is more than satisfactory. They might not have hit every single target, but they have accomplished all of their combat missions.”

Years of stagnation and underfinancing in the military and technology spheres had taken their toll on Russia’s defense capability. Thus, wide-sweeping drills were conducted to identify the scope of reform the army needs to undergo.

It cannot be denied that a series of drills as large in scale as this one, with hundreds of thousands of staff and tens of thousands of machinery units put to the test throughout the year, is an extremely costly endeavor. Yet the benefits of such an experience for the Russian armed forces are also quite evident.

The success of the current drills is a result of the lessons learned in late February 2013, when the country’s military authorities revised the results achieved during the surprise inspection of the Central Military District troops.

At the time, Gen. Valery Gerasimov, head of the General Staff, pointed to a number of systemic flaws in the armed forces.

“The unscheduled inspection … of the Russian army has led the General Staff to mixed conclusions. On the one hand, the military has been found highly fit for combat. On the other, a number of units have demonstrated systemic drawbacks. In particular, last year’s military school graduates performed poorly, and the state of the equipment leaves a lot to be desired,” said Gerasimov.

Battlefield management — the “nervous system” of an army — has also fallen short of expectations, according to the general. “In almost all of the inspected ‘hubs,’ the duty officers showed limited skills in getting communications across via automated combat control systems,” he said.

The unsatisfactory state of military equipment has become a matter of particular concern. In Gerasimov’s view, the checkup “has once again confirmed the validity of the Ministry of Defense’s decision to reinstate maintenance units in the army.”

The problem is that, currently, conventional maintenance shops and industrial enterprises offer services that are below quality standards. “Often, a piece of equipment that underwent an overhaul or interim maintenance and is still under warranty fails within the first few months of its operation in the forces,” said Gerasimov.

The head of the General Staff also mentioned the drawbacks found in the Mi-9 and Mi-24 helicopters, the Su-25 aircraft, the Msta self-propelled howitzers, and the R-168-5un radio stations.

“Under the outsourcing scheme promoted by Serdyukov [Russia’s former minister of defense], the aforesaid activities were to be performed by some commercial companies, which were supposed to tow and repair equipment during both field and combat operations.”

Hopefully, Russia’s new military authorities will put the knowledge obtained during the exercises to good use and — figuratively speaking — hit all the targets next time.