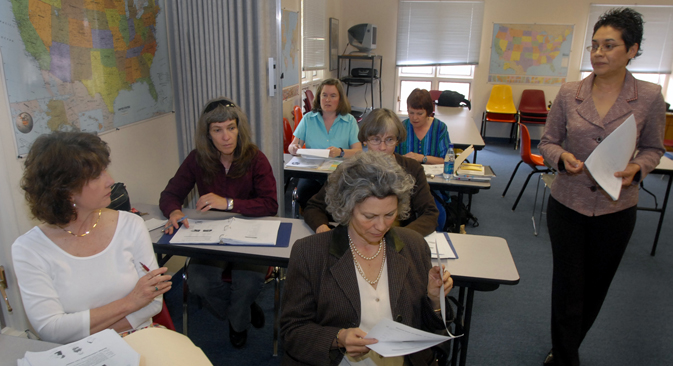 Russian language instruction will take place in existing cultural centers, as well as in new ones yet to be opened. Source: AP

The Pushkin Institute to rival the Confucius, Goethe and Cervantes institutes.

The Council on the Russian Language, which is to be established by the end of August, will promote the Russian language and culture across the CIS, most of the European Union, the United States, China, Japan and the Middle East. The priority list includes around 50 countries. Nearly $46 million has already been allocated for the program.

The Council’s main task will be to establish a network of centers under the umbrella of the Pushkin Institute, to teach the language and promote the Russian culture and traditions to all interested.

Russian language instruction will take place in existing cultural centers, as well as in new ones yet to be opened. The search for suitable premises for such a center has already started in Paris, for example.

A number of organizations — including the State Duma, the Foreign Ministry, Rossotrudnichestvo, the Russian World foundation, and several others — had been responsible for different initiatives aimed at supporting the Russian language abroad, before the government decided to systemize those efforts.

The Council on the Russian Language will be established by early fall. It will include representatives from the State Duma, Rossotrudnichestvo, the ministries of foreign affairs, education and culture, and academic, educational, creative and business organizations; Deputy Prime Minister Olga Golodets will become its head, Izvestia reported.

Alexei Levchenko, a representative of Olga Golodets, said that preparations for the establishment of the Council were in their final stages; its 2013 budget will amount to 1.5 billion rubles ($45.9 million).

The Pushkin State Russian Language Institute, which will prepare academic and teaching materials, will become the hub for the study of language.

The assistant dean of the Foreign Students Training Department, Baraudin Karadzhev, told RBTH that interest in the Russian language had been rising in recent years and students were coming from around the world to receive language training. 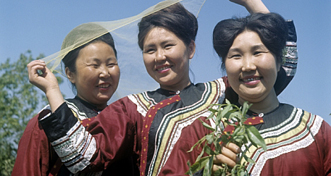 “Eastern countries demonstrate a strong interest in the language, and we have many visitors from CIS countries. For example, there are already three Russian language centers in Dushanbe, Tajikistan. We cooperate with such centers in nearly all European countries. Foreigners are opening centers on their own, where they teach Russian. In September, we will welcome a large group of students from Germany,” Karadzhev told RBTH.

He pointed out that entrepreneurs and lawyers working with Russian companies constitute the bulk of learners; there are also specialists in the humanities, including philologists, translators, historians, psychologists and sociologists.

Karadzhev noted that the Pushkin Institute used to have many branches, but, after funding dried up following the collapse of the Soviet Union, the centers started operating on their own and many had to close their doors.

According to Leonid Kalashnikov, first deputy chairman of the State Duma Committee on International Affairs, the new Council fits into Russian diplomacy’s “soft power” concept. He believes, however, that overall coordination should have been assigned to Rossotrudnichestvo rather than the government.

Olga Kryshtanovskaya, director of the Center for the Study of Elites at the Russian Academy of Sciences’ Institute of Sociology, believes that language is an effective tool for strengthening Russian influence abroad.

“Foreigners oriented toward doing business with Russia will want to study in those centers. There are also sufficient numbers of people that love Russian culture.”

Nikita Mkrtchyan, a senior researcher at the Higher School of Economics’ Institute of Demography, said that the number of Russian speakers worldwide has been shrinking rapidly over the past 20 years.

“Russian used to be taught all across the USSR, in the Warsaw Pact countries, in many Asian countries and in Africa. Citizens of former Soviet states that visit us today speak very poor Russian,” said the expert.

He added that, the more people have an opportunity to study Russian in their home countries, the better the quality of immigrants Russia will receive.

“We need immigrants from post-Soviet countries. Some 200,000 people move here annually for work; the official number of immigrants is 1.5 million, plus up to an estimated five million illegal immigrants. If all those people didn’t speak Russian, we would have to teach them here, which is more difficult: It’s harder to teach adults than children, and working immigrants just don’t have the time to study.”

Mkrtchyan also noted that the language centers would be developing in direct proportion to the growth of Russia’s appeal.

Director of the Russian World Foundation and chairman of the State Duma Committee on Education Vyacheslav Nikonov supports the idea, but believes the allocated funds are too small for the task at hand. Karadzhev agrees: Each language school requires serious investments, in addition to high costs of running the project.