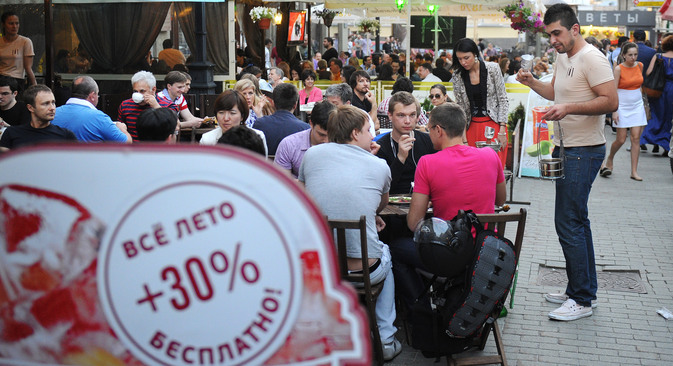 Muscovites will teach foreigners to cook Russian food and treat them to a traditional Russian lunch. Source: ITAR-TASS

City authorities look to spice up the café and restaurant scene and encourage the setting up of eating establishments in “alternative venues” such as rooftops and libraries.

Moscow officials believe that the city’s restaurant business is short on diversity because most cafés are run by networks. The Russian capital has one café or restaurant for every 1570 citizens, compared with 580 in London and 90 in Tokyo.

To rectify the situation, the city authorities have proposed a concept for the catering business. This concept includes a series of measures. For example, the “Moscow cuisine” brand will be promoted and the city’s culinary image will be improved by opening quality cafés and restaurants. A network of fast food and mobile cafés will be opened. There will be a gastronomic school and “culinary faculties” at universities to train public catering specialists. A gastronomic museum and gastronomic theatres will be set up. Russian food festivals will be held.

There are plans to open a major wholesale food market within the bounds of New Moscow to sell Russian-made products.

One interesting proposal is to organise “home lunches” for foreign tourists. A data base will be created of Muscovites prepared to invite foreigners, to teach them to cook some Russian food or simply treat them to a traditional Russian lunch.

Being aware of the shortage of rentable space, the city officials plan to use “alternative venues”, such as rooftops and libraries. The authorities intend to open public catering establishments near libraries popular with readers in the centre of Moscow, according to deputy head of the Moscow government’s trade and services department Alexander Ivanov.

Officials are planning to tackle the key problem of the shortage of rentable space.  Ivanov said negotiations were under way with the Moscow Property Department on making a quarter of all the city’s space available to catering establishments at a discount rate. “There aren’t as many of them as one would like,” Ivanov said. “When ‘non-tied’ space is put up for auction, which is often the case, a small café can hardly compete with a bank or shop.”

Ivanov did not rule out that Moscow might set up a public catering council to monitor implementation of the new strategy. Such councils exist in Toronto and London and have proved effective.

Arkady Novikov, a restaurateur who works in Moscow and London, says he already feels change in the authorities’ attitude to public catering. “The Moscow Government is taking many steps. For example, bureaucrats have speeded up the issue of permits for opening of summer verandas and restaurants and of alcohol licences. Bureaucratic red tape has diminished several times over. I can say from my own experience that many people want to open catering facilities and they are succeeding”, the expert says. “In fact, the bureaucrats have put in place a framework for development and now people must come forward who would like to take advantage of these privileges. These people need not necessarily be businessmen or catering professionals. It suffices for them to have some culinary skills. Such people can open a small family establishment. There are many home restaurants in Europe and we can try to do it here. This would be a new departure for Moscow.”

Novikov said he had opened four verandas this summer and his colleagues were doing the same. “The process benefits all parties –taxes, the tourist infrastructure and comfort”, he explains. “The figures cited by officials are quite realistic and you will see how things change in a year’s time. Everything will be better. If opportunities present themselves to work in this or that sphere, there will always be people willing to give it a try.”

Alexei Zimin, Editor-in-Chief of Afisha-Yeda magazine and co-founder of Café Ragout, takes a more guarded view of the Moscow Government’s plans. He says the concept should be written with due regard for the actual processes that are going on and entrepreneurs should be offered various options for supporting their business. “Bureaucrats can speed up development or they can wear down business with inspections”, says the restaurateur. “For example, any small bakery will lose out to a big one price-wise. But if a decision is made that there should be not fewer than a certain number of bakeries, officials would try to create conditions for them not to close down.”