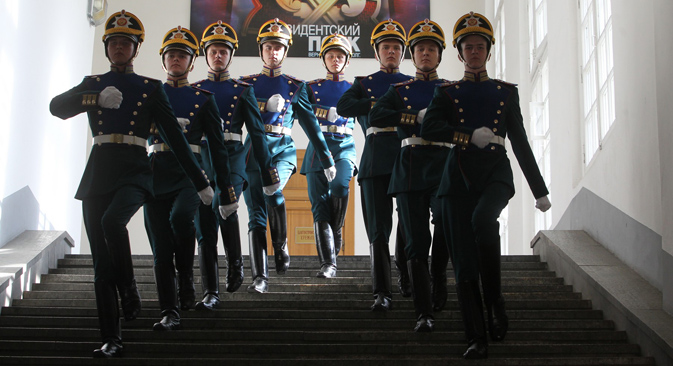 Looking at recent satellite photographs of the Moscow Kremlin, one can spot several new construction projects. The editorial staff of Rossiyskaya Gazeta sent its correspondents to uncover the Kremlin's “military secrets.”

All of these new Kremlin buildings, as Rossiyskaya Gazeta discovered, are military facilities being constructed for the Presidential Regiment commanded by Maj. Gen. Oleg Galkin. One of them will be commissioned very soon—a sports complex located near the new helipad. After a morning run in the Taynitsky Garden, soldiers of the Presidential Regiment will be able to warm up there. This is the first and only open-air sports complex in the Kremlin.

A permanent stable for the Kremlin Cavalry is being built in the Taynitsky Garden. Currently, when the guards need horses for parades, these must be brought in from the countryside. Altogether, the Cavalry Honor Regiment consists of two squads of 108 horses—actually one squadron. The residents can usually see, at best, between 12 and 24 riders during Saturday's ceremonial guard ride on Red Square and Cathedral Square.

“Twelve riders on Cathedral Square is the maximum,” said the commander. “If 24 riders arrive at the square, there simply won’t be enough space.”

“There is a real competition for the right to get onto the list of candidates to our regiment,” says regimental officer Col. Roman Lotvin. “At first, the conscripts are selected at the military registration and enlistment office, and then competitions are held—in marching, running, pull-ups, push-ups, assembly and disassembly of a submachine gun—and an aptitude test is given, as well.”

After three months of conscription service, the best soldiers may be transferred to contract military service. They are provided with a room in a dormitory. The soldiers also have the possibility of enrolling as part-time students at the Moscow State University (MSU) or at the Siberian Federal University (Krasnoyarsk). In the long-term, they may rise to the rank of warrant officer, and, after graduating, they may receive their commissions as officers.

“The Presidential Regiment is our talent pool,” says Gen. Sergey Khlebnikov, commandant of the Kremlin. “Cadets of this regiment serve virtually in all the departments and divisions of the FSO [Federal Protective Service of the RF], as well as in the Ministry of Defense and in various detachments of the Special Forces. From this regiment, many men have risen to the rank of general, or, in civilian life, became mayors and directors of factories.

“Alexei Sitnikov served in our regiment in 2005–2007,” the general says. “After his discharge, he served on a contractual basis with troops in the Interior Ministry; he fought in the reconnaissance echelon of the Vytyaz Special Forces Unit in the North Caucasus.”

While on duty in Dagestan, Sitnikov killed a suicide bomber, but he was mortally wounded during the fight. Alexei Sergeyevich Sitnikov was posthumously conferred the title of Hero of the Russian Federation.

“Such great men are prepared in our regiment,” says Khlebnikov.

“What do people usually see? Our honor guard company wearing ceremonial uniforms and the Cavalry Escort of Honor. However, we must not forget that one of the main tasks of this regiment is the protection and defense of the Moscow Kremlin, the official residence of the president, as well as other facilities that are protected by the FSO.”

Honor guard at the eternal flame of the Tomb of the Unknown Soldier change each other every hour in summer and every 30 minutes in winter. Source: Youtube

“Previously, officers only carried Makarov pistols, but now they also have Yarigin pistols. Previously, they had only SVD sniper rifles, but today they also have two new sniper complexes— for short and long distances. They have optical devices for Kalashnikov machine guns and new telescopic sights. We have switched to new body armor and radio-equipped helmets. All of this equipment is produced in our country.”

Military base in Moscow Region

“We train our Cavalry Escort of Honor in Alabino. Soldiers are prepared for all the trades—from blacksmithing and veterinary medicine, to athletics for show jumping.”

Swedish horseshoes for the cavalry

Special recruitment for the Kremlin's guard of honour

PHOTO OF THE DAY: Mounting ceremony

“These rubber horseshoes are a real help on the Kremlin’s cobblestones; the usual metal horseshoes would slip there. When not on pavement, we use locally made steel horseshoes. All other horse harnesses are manufactured by special order in Russia. The swords for the Cavalry Escort of Honor are also special ordered from Zlatoust [Russia’s traditional center for the manufacturing of cold steel, located in the Urals]. We have just placed an order for a batch of training swords, to keep from having to use fighting ones.”

“There are no tricks against heat, except one; we did not advertise this before, but I think that this is no longer a secret. Previously, when our guards stood at the Lenin Mausoleum in the summer time, when there were no visitors, our detail inside the mausoleum directed a fan toward the guards, through the open door.

“When it is cold, only traditional methods are used. Once, we tried installing heaters in the sentry booths. However, at the request of the guards, these were removed. This idea turned out to be worse: In outside temperatures of 25 degrees below zero Celsius [18 degrees below zero Fahrenheit], when you got to the post, your feet would start sweating.

“Of the remaining secrets, I can only reveal the ointment against frostbite that we use. There are modern ointments in the pharmacies, but they are no match for the classic goose or pork fat.”

“I have been commanding this regiment for 10 years, and during all this time we have been closely cooperating with the Russian Orthodox Church. We have a guiding priest for each battalion. We respect the secrecy of confession. The priests never reveal to us any names of soldiers who approached them with a problem. The priests are present when the soldiers take their oaths, at officers' meetings, and they come to our field camps. However, we do not have priests on the regular staff—and I personally do not believe that a priest should be on the staff of a military unit.”