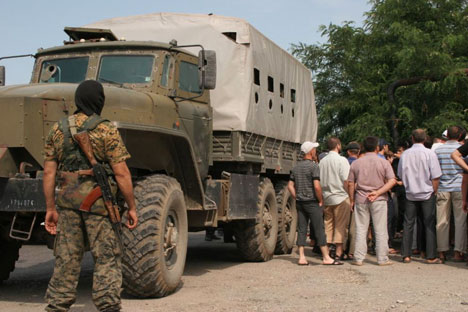 In anticipation of the winter Olympics, Russian federal forces have launched a major crackdown on Islamic insurgents this summer. But many families in the North Caucasus say they have become random targets, which in turns leads to more young radicals.

All photos by Anna Nemtsova

With less than six months to go before the Sochi Olympics, Russian federal forces have launched a major crackdown on Dagestan’s fundamental Islamic insurgency this summer. Many families in the North Caucasus town of Buinaksk, home to a large Russian military base, said they have become a target for military operations.

Before July, authorities detonated explosives in at least three private homes in Buinaksk. The general director of Internal Affairs  in Buinaksk confirmed that searching houses is a part of the  major Counter Terrorist Operation declared in Buinaksk on April 1st; apparently explosions were carried out as a part of the major crackdown.

“No legal documents are presented to justify the explosions," Aisha Selimkhanova, an activist from the Pravozashita human rights organization told RBTH. 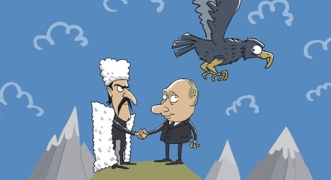 That the campaign has all the hallmarks of earlier efforts have only radicalized people more, Caucasus analysts and human rights observers said.

Tazhuddin Kurakhmayev, a patient man with a grey goatee, is a senior electric engineer at the state power supply headquarters in Buinaksk. He huddled with fellow employees who wanted to tell their stories.

Kurakhmayev said his neighbors called him at work on the morning on May 13, 2013, with news that his house was under siege. He rushed home; the house was surrounded with armed vehicles and police demanding that his 24-year-old son Zaurbek Kurakhmayev, come out of the house. Police suspected that his son in helping the Islamic insurgency.

Kurakhmayev persuaded police to put him in front of phalanx of armed officers, so together they would enter the house. When they did, his son Zaurbek was standing in the kitchen, unarmed. Police arrested him and thoroughly searched the house, where they found a registered pistol, Kurakhmayev said. But that was not the end of the special operation. “Eight snipers arrived and someone carried heavy bags full of explosives into my house to blow it up,” the father said.

Kurakhmayev managed to defend his house. Federal Security Bureau officers sent the bags with explosives away. Kurakhmayev looked for his son for three days he said, and found him at the Investigative Committee in Dagestan’s capital of Makhachkala with bruises on his wrists and burns on his feet. “Thank God, in spite of torture, my son hadn’t signed a confession of any involvement with terrorism,” Kurakhmayev said.

Many parents in Russia’s North Caucasus live with constant fear that their children will join the “forest” insurgency. The forest is a broad term for the Emirate Caucasus, a terrorist organization trying establish itself. Last January Zuleikha Karanayeva, a delicately built 41-year-old woman in a black hijab heard that her youngest son Khan had joined the insurgents. Every couple of weeks, police searched her house until on a recent afternoon when special forces asked everybody to step outside. Half an hour later she heard an explosion. It blew out half of a front of Zuleikha’s house. “Every day I ask Allah to keep my son alive,” Zuleikha said in a recent interview at her half-ruined house.

Earlier this month a video statement posted on the Internet by the commander of Caucasus Emirate militants Doku Umarov called for attacks at the Sochi Olympics in February of 2014.

“Violence gives birth to Violence,” people say in Dagestan, a republic with of over 30 ethnic groups among 2.9 million people.  The news agency, Caucasus Knot, the only mass media trying to provide an accurate and independent report on the violence in Dagestan, states that 413 victims died in 2011 and 405 died in 2012. Many more have been seriously injured.

In June, authorities ordered the arrest of Makhachkala mayor Said Amirov. Amirov is currently in custody in Moscow; he faces accusations of having ordered the murder of state investigator, Arsen Gadzhibekov.

Suicide bombers target police, security service agents, judges, Imams and other representatives of authorities; the guerillas fight a separatist war in order to form Dagestan into an independent Islamic state with an Islamic legal system. Until then, they say, they also fight to enforce Islamic law on the population today. Several bombs went off last spring.

In 2010 president, Dmitry Medvedev’s administration inspired peace talks between the two Sunni groups of Sufi and Salafi Muslims; independent experts claimed at the time that it was the most reasonable strategy conducted by the Kremlin in North Caucuses in the past decade. Fundamentalist Islamic groups were partially legalized. The dialogue led by Dagestan’s Mufti and Sufi leader Akhmad-Khaji Abdullayev on one-side and the association of Salafi scholars called ahlu-Sunna on the other side took place at various round tables during the last three years. In fear of a developing civil war, peaceful Muslims signed a peace resolution last April.

In order to bring insurgency out of the forest peacefully, the republic’s president at the time, Magomedsalam Magomedov, made a decision to establish commissions to bring the forest insurgents back to civilian life. Several fighters who surrendered and appealed to the commission were allowed to go and live at home.

But Magomedov did not solve the problems pushing young people toward the forest in the first place. He reinforced the traditional system of dividing government offices and subsidies so every powerful ethnic clan had its own funding from Moscow. Medvedev, now prime minister, identified Dagestan’s key issue as the “monstrous scale of corruption,” and said this was the chief cause of the conflict.

The new strategy of enlarging the military presence and hunting down terrorists in all of Dagestan’s regions appears counter-productive, experts say. “We are concerned that   the new tough policy will slow down the constructive dialogue leaving no free space for mild Salafi, that will cause even bigger radicalization,” Sokirianskaya said.

Ironically, a few weeks before his arrest, mayor Amirov admitted that terrorism could not be fought without a simultaneous war on corruption. “Ten Amirovs will come to take his place,” police union leader and human rights activist Magomed Shamilov said. “The only solution to terrorism is a major anti-corruption campaign.”

Backgrounder: The conflict in Dagestan

After the Boston marathon bombing, Americans found out that Tamerlan Tsarnaev, the Chechen bombing suspect who was killed in a shootout with police, had traveled to Dagestan last spring. Suddenly the region was again on the international map, but few Americans understand the conflict there.

The multi-layered conflict is fought among police who are mostly Suffi Muslims, ethnic Russian federal security service agents, soldiers and interior ministry troops, various criminal groups and a radicalized Islamic underground. By the end of the second Chechen War that ran from 1999 to about 2009, most of the Islamic resistance spilled over to neighboring Dagestan. Disillusioned by overwhelming corruption and unemployment, young Muslims joined the largest of several groups of Islamist radicals.

Local police and special services staffed with mostly Suffi or non-Muslim personnel respond to violence with violence, without trying to distinguish peaceful Muslims from radical Islamists fighting the war, human rights campaigners say. Law enforcement agencies read the word Wahhabi, which is a form of fundamentalist Islam, as a synonym for terrorist.

Conservative Muslims worshiping, as they claimed, “pure Islam” suffer from abductions, torture in secret prisons and extrajudicial executions. Brutal methods fueled the jihad. The government’s idea to oppose Salafism with the so-called “traditional Islam” of imposed Suffism has not worked - Dagestan’s youth romanticized the war and supported their “brothers” fighting in the woods and mountains.