Frotteurs and thieves on the Moscow metro 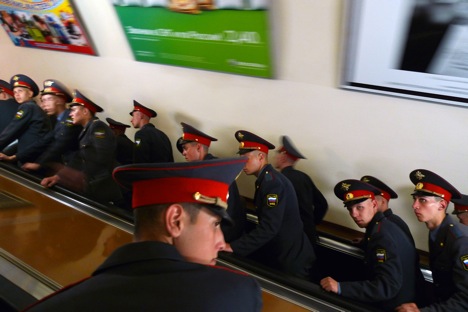 To avoid becoming a victim of a crime, police advise metro passengers to act rationally and take care of their belongings. Source: Sergei Mikheev / RG

In the Russian capital, the underground is a natural crime magnet. No other place in the city forces an anonymous mass of people into such a small space with such easy escape routes.

It happens all the time. You're standing in a metro car during morning rush hour, packed into a crush of human bodies on all sides. You reach into your pocket to check the time on your mobile phone, and then put it back. When you reach again a few stops later, it's gone - and you've never even seen the thief.

In the Russian capital, the underground is a natural crime magnet. No other place in the city forces an anonymous mass of people into such a small space with such easy escape routes.

As the number of Moscow commuters climbs steadily each year (the metro now transports about seven million people a day), the number of crimes rises too. Investigative Committee statistics say the quantity of reported metro crimes jumped 40 percent in 2012 compared to the year before. Over 1,600 crimes have been reported in the metro so far in 2013.

Theft constitutes the vast majority - police say up to 90 percent - of reported crime that takes place underground. But there's another type of metro crime: one that happens alongside all the rest of the robbery, stabbings, and drunken brawls, but that's rarely reported.

"I was taking the metro home at night last year," Katya, a 28-year old Muscovite who asked that her last name be withheld, told The Moscow News. "It was late, probably about 11:30 pm. I was getting onto a train when suddenly a man grabbed me, thrust his hand into my bra, squeezed my right breast, and then ran away."

Katya was so stunned, she said, that she neglected to react before the train left the station. She returned the next day and did report the incident to the police, but they never caught the perpetrator.

"When I told my female friends about it, many of them said they had also been touched or felt by strange men on the metro," Katya said.

Fondling people on public transport is known as frotteurism. It involves sexual gratification gained by surreptitiously touching or rubbing one's body against an unsuspecting, non-consenting person in a public place. Public transport is a popular venue for frotteurs, due to its ever-changing crowd of captive passengers.

Women rarely file reports of incidents of sexual harassment or assault on public transport, often because of embarrassment, uncertainty as to whether it actually counts as a crime, or simply accepting the issue as a fact of life. As a result, definitive frotteurism statistics can be hard to find.

Still, this type of harassment is an issue recognized all over the world. In response, female-only public transport has been introduced in at least 15 countries - including Brazil, Egypt, India, and Indonesia - to protect women.

Moscow hasn't gone so far as to designate metro cars for ladies specifically, but a couple pink taxi services have been introduced in recent years to help keep women safe while traveling around the city.

When asked about sexual harassment in the Moscow metro, a police source, who spoke on condition of anonymity, said that it was the first time he'd ever been asked about it. "I don't have any statistics about that," he told The Moscow News.

The police source did suggest, however, that sexual harassment currently happening on the Moscow metro might be a factor of the season - summer being a time of year when Moscow's psychiatric wards release mental patients onto the city streets.

"As I understand it, those who are treated as inpatients during the winter get something of a vacation in summer," he said. "It's the season when our psychiatric wards let people out. They ride the metro, so in theory, [the sexual harassers] could be them."

By press time, staff at three different Moscow psychiatric hospitals said they were unable to comment about their release policies.

Yet police have, anecdotally, connected psychiatric patients on "summer holiday" to crime on the Moscow metro before.

Alexandra, another Muscovite in her 20s who asked that her last name be withheld because she finds her story embarrassing, was heading home on the metro late on a summer night two years ago.

"I was standing near the door of the metro car when a woman with a large plastic bag of what appeared to be packages of rotting fast food got on and stood close to me," Alexandra told The Moscow News. "I could smell whatever it was that was rotting in that bag, and for a very brief moment, we made eye contact. That was it. She suddenly yelled at me, ‘What do you want? What do you want?'"

Alexandra got off at the next station to transfer trains, but didn't realize that the woman had followed her - until the woman began hitting her with the bag of food.

"She attacked me from behind, hitting me repeatedly and screaming obscenities. The bag was soft and mushy, so it didn't hurt, but it was just a very gross feeling," Alexandra said. "It was funny and surreal at the same time, like a David Lynch movie."

Eventually, another passenger came to Alexandra's aid and the woman escaped up the escalator.

When she filed a police report that night, Alexandra said, the officer in charge blamed the policies of local mental hospitals for the incident. "The police officer told me in confidence that in the summer they see many disturbed people on the metro, as some of them are given extended holidays from their psychiatric facilities," she said.

Regardless of the perpetrator's identity, any potential victim of theft, sexual harassment, or physical battery has the right to proportional self-defence.

"[If attacked on the metro] you can defend yourself by any means not prohibited by our laws, but your actions must correspond with the danger," Anastasia Rastorguyeva, a criminal lawyer at Barshevsky and Partners in Moscow, told The Moscow News. "If you see a thief reaching into your pocket where you have your wallet, then it would be considered excessive force to shoot him in the head, even with a traumatic weapon."

Russian law allows citizens to carry non-lethal guns as a means of self-defense, but it's ultimately up to Russian courts to decide whether a potential victim acted in proportion to a threat. If the judge rules an action of self-defence disproportionate, the punishment can be severe.

Alexandra Lotkova, a 21-year-old university student, was sentenced to three years in prison in March for injuring two people in a metro station with a traumatic firearm. Lotkova said she acted in self-defence to protect herself and two friends from armed strangers, but the judge ruled she had fired her weapon when there was no direct threat to her life. Lotkova appealed the court's decision but lost.

To avoid becoming a victim of a crime, police advise metro passengers to act rationally and take care of their belongings. They've recently started posting safety stickers on the insides of some metro cars that warn against the dangers of pickpockets and offer tips for protecting personal items from being stolen.

If you need to report a crime in the metro, police say you should find an on-duty police officer at the station. If there isn't one, you should go the emergency panel in the center of the hall and press the SOS button (you'll have to leave your passport information).

Dealing with pickpockets, drunks, aggressive strangers and sexual harassers is ultimately just a simple fact of big city life, Maria Vodolazskaya - a Muscovite in her 30s who's been robbed and witnessed frotteurism on the metro - told The Moscow News.

"You have to be all eyes," Vodolazskaya said. "Relaxing is possible only behind your closed door at home."