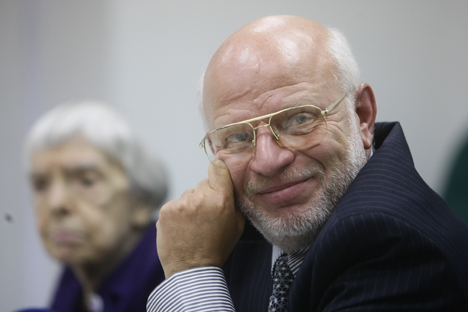 Council for Human Rights: “We are all teachers and students”. Source: RG

Chairman of Russian Council for Human Rights Mikhail Fedotov believes that Russia and Europe should go past their discrepancies on human rights and cooperate as equals.

The chairman of the Presidential Council for Human Rights, Mikhail Fedotov, believes that Russia and Europe need to develop cooperation on the protection of human rights, despite sharp criticisms leveled at Moscow by its Western partners.

Russia Beyond The Headlines: Europe has been fiercely critical of Russia for certain decisions that many believe are restricting the rights of Russian citizens. Do you think there is at least some rationale behind the ban on gay propaganda, or the laws protecting the feelings of religious people, or the law on “foreign agents”? How can those laws be justified?

Mikhail Fedotov: The Council opposed those bills, on the grounds that they were half-baked and counter-productive. Judicial practice of the NGO law as it applies to so-called foreign agents has demonstrated that it operates indiscriminately, without specifying which organizations it applies to; that’s why it needs to be amended. The Council holds the same positions on the other laws you’ve mentioned.

RBTH: Should the process of developing cooperation and looking for compromises on certain issues (such as visa-free travel) be directly related to Russia’s efforts to expand or narrow the freedoms of its own citizens?

M.F.: I believe there is no link, and there can be no link at all. We are interested in both a visa-free travel regime with Europe and the expansion of the rights and freedoms of our citizens. You can’t put pressure on Russia, or on anybody else for that matter; it’s a waste of time.

We are fully aware of our flaws, problems and shortcomings, and we will be very grateful to anybody who helps us remedy those flaws. But don’t blackmail us. We are interested more than anyone else in having good laws and a democratic state based on the rule of law.

RBTH: What could help overcome the mutual mistrust between Russia and Europe?

RBTH: In what areas can cooperation between Russia and Europe be most effective?

M.F.: In the area of human rights and civil society development.

RBTH: Which European organizations and institutions do the Council for Human Rights cooperate with?

M.F.: First of all, we cooperate with the Council of Europe. Our most active cooperation is with Germany, as part of the St. Petersburg Dialogue Russian-German forum; we hold regular meetings and conferences. A summer school of young historians has just ended in the Perm region.

Late last year, a conference took place in Moscow on the subject of “The State and the Person: Lessons from the Past, Designs for the Future,” attended by delegates from six European countries. The second part of the conference will take place at the end of this year in Berlin; we are preparing joint research, including on public television and NGOs.