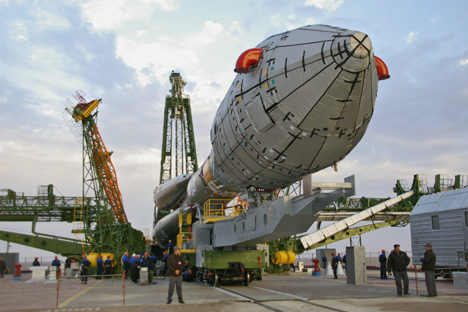 A Proton-M rocket, with a DM-03 booster that was carrying three Russian-made, Glonass-M, space-navigation satellites, crashed less than a minute after being launched from Baikonur on July 2. Source: ITAR-TASS

Russian's Finance Ministry announced this July that the budget for the federal space program for 2013-2020 would be cut by approximately $19 billion.

Next year's federal spending on space exploration in Russia is currently pegged at $5.47 billion. But Russia's Ministry for Finance wants the space-program's budget cut by more than $220 million, to $5.25 billion.

The Ministry is also recommending that the Russian Federal Space Agency's (Roscosmos) 2015 budget of $6.42 billion be reduced to $6.01 billion and its 2016 budget be capped at $6 billion, instead of the $7.36 billion it was expecting.

"The primary factor in these [proposed] reductions … was a recalculation of the dollar-exchange rate applied to the rent being paid for the use of Baikonur [Cosmodrome]," read the Finance Ministry's vague explanation.

To understand what's going on in Russia's space sector today, it helps to look back at the history of global space exploration.

As soon as humanity's dream of the first space-flight was realised, it was became clear that space exploration could take one of the two possible routes. Countries could go down the road of "breakthrough" launches and image-boosting programs whose scientific and economic value was next to zero. Or they could be more pragmatic, rationalising space priorities based on the defence/security and/or economic needs of the day.

In time, profitability came to dictate what goals should and shouldn't be pursued in the space sector. This has especially been evident in the field of space communications and satellite-based navigation, and NASA has led the way in commercialising the space sector.

When the space-services market emerged in 1970, its first two specialisations were data digitisation and communications. In 1991, the leading US and European market players set up the Global Star international space-based communications consortium, which had its own satellite constellation and offered services to commercial users.

The USSR, in the meantime, was still going down the road of 'glorious space achievements'. According to Lieutenant-General Georgy Lysenkov, former deputy commander of the Soviet Defence Ministry's Space Units: "Our leadership never spared a cent when it came to space exploration. With defence projects in particular, if you even hinted that the budgets were excessive, you'd lose your job."

Times have, of course, changed. Roscosmos privatised the space sector in the early 1990s, setting up a series of joint ventures with EU and US partners. The START I disarmament treaty of 1991 allowed Russia to convert its Soviet-era SS-19 intercontinental ballistic missiles into Strela and Rockot commercial-launch vehicles.

Nevertheless, the Russian government's love of flashy displays isn't giving in to sensible pragmatism when it comes to space exploration. One example is the Glonass satellite-based navigation system - a necessity for Russia's economy perhaps, but the Glonass program mandated that every vehicle in Russia have a Glonass receiver on board, even though civilians won't really benefit, in the short-term, from using Glonass over the US GPS Navstar system.

Russia to build orbital base

As a consequence, the Glonass system, which is needed by the Russian Army, emergency relief units and other government agencies, has been failing for years to reach its full operational capacity of 24 serviceable satellites in orbit. Its ongoing failures prompted the Finance Ministry, in August 2012, to freeze the program's budget at its 2011 level of 19.3 billion roubles.

It would be quite difficult to argue with Ivan Moiseyev, head of Russia's Space Policy Institute, who points out that the country's space ambitions should be measured against its financial capabilities: "We want too much: a new launch vehicle, a new piloted spacecraft, a new spaceport, a Lunar base; but the sector's productivity is appallingly low. It would make more sense if we invested in modernisation and improvements to production effectiveness."

The best precondition for a revival of the Russian space industry would be the development of new space-vehicle designs based on advanced technology – even though for some this might signal a serious departure from the grandiose fantasies of the past.