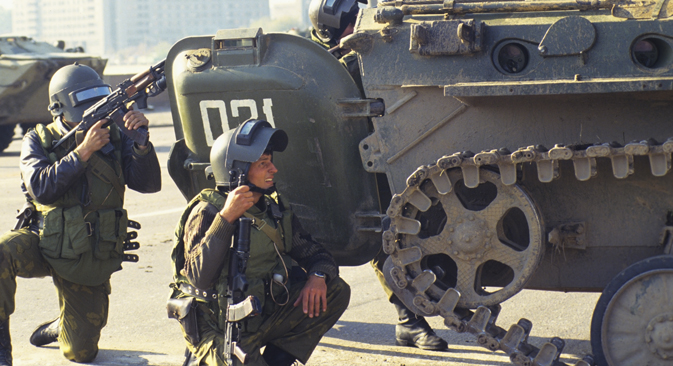 The constitutional crisis of 1993. Soldiers of the special units "Alfa" and "Vympel" near House of Soviets of Russian Federation. Source: Vladimir Vyatkin / RIA Novosti

The Alpha unit is the most famous anti-terrorist force in Russia.On the 39th anniversary from its foundation, the president of the international association of Alpha veterans speaks about the team’s history and the challenges it faces before Sochi Olympics.

The Alpha unit is the most famous anti-terrorist force in Russia, and it is considered one of the most effective and advanced in the world. On July 29, Alpha celebrated its 39th birthday.

What has changed in the structure of this special operations force since its creation, and what challenges will confront the officers of the team during the Winter Olympic Games in Sochi? A RIA Novosti correspondent spoke to the president of the international association of Alpha veterans, Sergei Goncharov.

RIA Novosti: Sergei Alexeevich, first of all, we want to congratulate you on the anniversary of Alpha. On this occasion, I would like to ask a few questions. Are there any plans in the future to create divisions like Alpha?

Sergei Goncharov: Thank you for the congratulations. I do not think that, at the moment, there are some prerequisites in order to create units parallel to those that already exist in the Russian Federal Security Service. Primarily, these are the elite forces Alpha and Vympel. New units are not needed, since the existing ones perform 100 percent of  the tasks set by the country's leadership.

Read more: The honor of wearing the crimson beret

RIA Novosti: What should an officer of Alpha be? Have they changed the selection criteria since the creation of the group?

S.G.: Generally speaking, the differences are enormous. If in the 1970s units were only employees of the Committee of Public Safety, now Alpha has been given the power to select officers from all departments.

Those wishing to join the special operations forces are many, but we select only the best. The technical component of the issue also has changed; there has been a large-scale re-division. Only the officers’ mood and their sense of duty to the country remained unchanged. The rest, of course, has changed dramatically. And I want to say for the better.

RIA Novosti: Has Alpha had more work in recent years?

S.G.: Yes, acts of terrorism in the 1970s were perceived by people as a grand state of emergency for the entire country. And now, as you know, there is not a single day that the agencies do not report about contract murders, or acts of terrorism — mostly occurring in the territory of the North Caucasus or other neighboring regions. As you know, the threat of terrorism is now much higher than it was before.

RIA Novosti: Due to the upcoming Olympics in Sochi, are there plans for any special training program for Alpha? Maybe it will be holding some special exercises?

S.G.: Exercises go on almost every month. All units fulfill the tasks that stand in front of them. Operational and undercover components of Alpha will work at capacity. And the main thing that everyone understands is that the North Caucasus and the surrounding area are a zone of special attention.

Ensuring safety — this is the essential element for security forces during the Olympic Games. For us, the main thing is to hold the Olympics without a state of emergency — this is objective number one.

RIA Novosti: Does Alpha communicate with some of their foreign colleagues?

S.G.: Units such as Alpha feel the need to learn from the best practices of foreign special operations forces, and, of course, we study the same experience of the Israelis, the Americans, the Spanish, the English, and so on. But, at the very least, I think our division is among the top three in the world. So, apparently, much of our foreign colleagues are still learning from us.

The Alfa unit was created as part of the State Security Committee on July 29, 1974. Initially called simply “A,” journalists eventually dubbed it “Alpha,” and the new name was approved and made official.

The unit, according to the directive on its establishment, originally operated "to curb terrorism, sabotage and other highly dangerous criminal acts committed [...] in order to capture foreign missions and their staff, particularly important [...] facilities."

Prior to 1985, the Alpha unit was subordinate to the General Secretary of the CPSU and the leadership of the KGB (the Soviet security agency).

Initially, the number of Alpha personnel did not exceed 40 people, speaking exclusively of KGB agents who had undergone special training.

Later, the number of personnel increased, and, with regional offices established in Ukraine, Belarus, Kazakhstan, the Russian Far East, the Urals and in the North Caucasus, the number was at more than 500 by 1991.

Currently, without counting the three regional divisions — Krasnodar, Yekaterinburg, and Khabarovsk — about 250 people serve in Alpha in Moscow.

Alpha has held dozens of combat operations. On December 27, 1979, during a special operation in conjunction with other officers, Alpha captured President Hafizullah Amin’s heavily fortified presidential palace in Kabul. This assault began the war between the Soviet Union and Afghanistan.

On June 17, 1995, Alpha participated in the storming of a hospital in Budennovsk (Stavropol Territory), in which terrorists led by the Chechen militant Islamist Shamil Basayev held more than 1,000 people hostage.

Alpha forces have been responsible for the release of hostages taken by terrorists in several cases, including in Dubrovka (October 23-26, 2002) and Beslan (September 1-3, 2004). Alpha also regularly participates in special operations in Chechnya and other republics of the North Caucasus. They are responsible for the elimination and capture of hundreds of warlords and foreign mercenaries, active militants and their supporters, and bandits, as well.

Alpha has repeatedly provided the personal security for top officials during their visits to Chechnya and other "hot spots."

Alpha officers are armed with unique weapons and special equipment — silent pistols, rifles and machine guns (including those that can fire under water) made for special order. In addition, many Alpha personnel undergo climbing and diving training and know how to drive a wide array of armored vehicles.