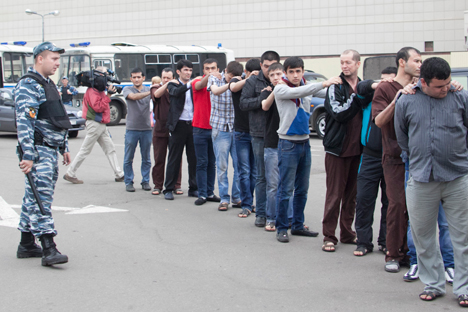 The incident in the Matveyevskoye marketplace once again made society recall the problems arising from migration. Source: ITAR-TASS

Reports describing the attack by a group from Dagestan on a policeman near a Moscow market have produced an impact of such a dimension that Vladimir Putin has been compelled to personally intervene in it.

On July 27, a brawl between a policeman, who was trying to arrest an 18-year-old Dagestani on suspicions of a rape, and the alleged-rapist’s compatriots, broke out in a city market in Moscow’s Matveyevskoye district. The Dagestanis worked as traders in the market.

The suspect’s sister and brother-in-law intervened in the police efforts to arrest the young man. As the drama kept unfolding, Magomed Rasulov from Dagestan severely injured the policeman, Anton Kudryashov, by breaking his skull.

Video footage of the brawl shows very clearly that other policemen watched the scene almost idly and were not particularly active in defending their fellow-officer. They did not use any special means even after it became clear that the operative had received a heavy wound.

Rasulov was detained but only two days after the incident when he was trying to make a getaway from Moscow. His wife and he have been arrested on charges of making an attempt on the life of a policeman.

A sweeping operation to decriminalise the situation was launched at many of Moscow’s markets right after the incident. Several thousand ‘guests of the capital city’ - most of them of Caucasian and Central Asian ethnicity - were detained.

A criminal case over occupational negligence was instituted against the chief of the Ochakovo-Matveyevskoye police department Alexei Pravkin and two patrol officers who did not intervene in the beating of their colleague and did not try to detain the attackers afterwards. Another four policemen tentatively involved in the event were fired and sources say they may also be brought to criminal responsibility in the final run.

It would be totally wrong to call the incident a headline-making event, since conflicts between the forces of law and order and immigrants from the Caucasus and Central Asia have turned into a routine fact of life. The growth of crime among the migrants has become routine, too.

A variety of proposals has been voiced in this connection, including the introduction of visas for the citizens of Central Asian and South Caucasian countries.

The echoes of the incident have been so loud that even President Vladimir Putin had to intervene. He issued an instruction to transfer the investigation of the case to the Interior Ministry’s Department for Internal Security and to get the Investigations Committee, the Prosecutor’s General Office and the Federal Migration Service engaged in it.

Putin got indignant over the policemen’s inaction. “Policemen are standing nearby and watching someone beat up their colleague. Why?” he asked at a conference with Moscow City officials and law enforcers. “In all probability, they were showing they were worth the thirty pieces of silver those traders had paid them.”

“That’s all clear and known perfectly well,” Putin went on. “It isn’t known only to the Interior Ministry’s Internal Security Department. So where are the results or their work?”

More often than not, the root-cause of the situation lies in the formation of tight bonds between the state organizations and traders. “That’s regardless of those traders’ ethnicity,” he said.

The incident in the Matveyevskoye marketplace once again made society recall the problems arising from migration. The debates around errors in Russia’s migration policies flared up anew.

It was back at the end of last year that the editor-in-chief of the Superjob.ru recruitment portal, Alexei Zakharov sent an open letter to the President. He called for a full ban on the imports of inexpensive workforce into the country.

“What are the benefits we get from the inflow of dozens of millions of low-qualified migrants?” Zakharov asked. “I don’t see any benefits. We are watering down the Russian culture. Uncontrollable migration creates problems not only in Moscow and other ‘ethnically Russian’ megalopolises. The influx of cheap workforce from abroad poses the same type of difficulties in our Muslim regions.

About 3,000 illegal migrants detained in operation in Moscow

“If this influx does not stop, schools and districts where Russian speech will be a rarity will appear already in the medium term, the expert warned. What kind of a modernised economy can we speak about if the use of slave labour is the case in hand?”

An unregistered party calling itself the New Force has launched the a signup campaign in the Internet in favour of introducing travel visas for the citizens of Central Asian and South Caucasian nations. Its leader, Valery Solovei explained for the move by saying the economic advantages of migration has been hugely overstated and Russia simply does not need 90 percent of the arriving migrants.”

“They bring in with them a tidal wave of crime,” Solovei went on. “Migrants commit 70 percent of sexually aggravated crimes in Moscow.”

Support for his initiative is far from universal, though. “It falls in line with the plans of the U.S. Department of State for further ruining the post-Soviet space,” Geydar Djemal, the chairman of the Islamic Committee of Russia told the OK-inform.ru portal. “That’s incredible rubbish. People from the former Soviet republics will have queue up for visas then while the Turks and the Russians - or, say, the Egyptians and the Russians - will be making reciprocal trips without any visas at all.”

Mikhail Delyagin, a pro-Socialist economics expert and publicist believes the introduction of visas will help lift but only a half of the problem, as a considerable percentage of crimes is committed by people from North Caucasus who have Russian passports.

“The Chechens and the Dagestanis more often than not display a far more aggressive behaviour than the Uzbeks or the Tajiks,” he said. “After the commit the criminal acts, they simply travel back home where it’s next to impossible to find them.”

President Vladimir Putin admitted in the course of a face-the-nation televised show in April that tougher regulations for entering the Russian territory are essential. Yet he said that their introduction will scarcely take practical contours before 2015.