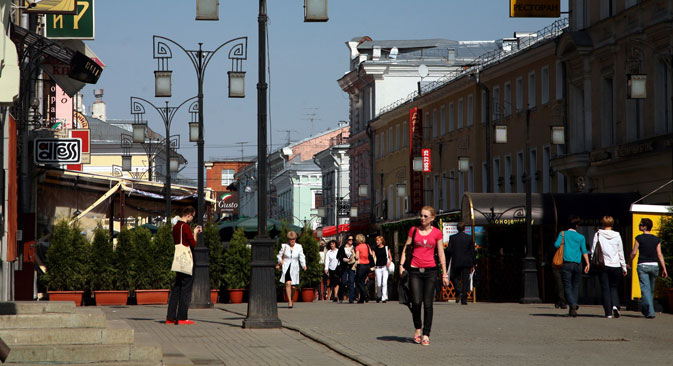 Last year, the city saw a record number of tourists, with five million people visiting the Russian capital. Experts predict that the figure will increase by another 500,000 visitors this year. Source: ITAR-TASS

The face of Moscow is changing at a blinding pace: Parks are being redesigned, trees are being planted, and a network of sidewalks is being created. What has prompted this surge of activity? Experts claim world trends in tourism are behind the initiative.

In a few days, Nikolskaya Street, which leads to the Kremlin, will become a pedestrian sidewalk. Construction work is going on around the clock, as new granite tiles are being laid. Once this has been completed, new streetlights, benches and tourist signs will be put in place.

Moscow Mayor Sergey Sobyanin stated in late July that, last year, the city saw a record number of tourists, with five million people visiting the Russian capital. Experts predict that the figure will increase by another 500,000 visitors this year. The city’s infrastructure must change if it is to be able to handle such a massive influx of guests. 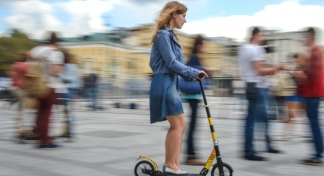 In May, the Moscow mayor has already announced a full-scale program to create pedestrian areas and plant greenery. By this fall, thirty new pedestrian areas will appear: Asphalt will be replaced by granite tiles and tourist signs will be put up. After reconstruction, all of these routes will make up an extensive pedestrian network.

Twenty neglected mini-parks on the Garden Ring area are also being planted with greenery. The new tourist network, according to Sobyanin, will be under the jurisdiction of the city’s Department of Culture—which means it will be protected against commercial development.

Architecture expert Yelena Gonsales believes changes to the urban environment are a world trend that Russia has ignored for a long time and cannot afford to ignore any longer. The new look of the city will make it more attractive for investments, according to the expert.

“It’s not just the streets that will change; people’s behavior will change as well. Production facilities are moving out of the city and services are becoming the main industry. The new people will want to and have the opportunity to walk on the streets, drop by at cafés, shop and meet with friends. They need something more than well-kept streets,” says Gonsales. “Façades need a facelift and monuments must be restored. After all, you are not going to walk down a pretty pathway if there is nothing else around.”

Gonsales, curator of the recent Green Moscow exhibition that was organized as part of the Moscow Architectural biennial ArchMoskva, introduced, together with the Wowhouse group of young architects, the Green Loop project—a pedestrian path several miles long along the Moscow River embankments. Much has already been done. For example, architects have proudly unveiled a new river station, Vorobyovy Gory, where popular excursion boats stop.

The Green Loop project is part of a larger city project being run by the Moscow Department of Culture, aimed at modernizing Moscow’s parks. The head of the department, Sergey Kapkov, began park reconstruction when he was the director of Moscow’s famous Gorky Park.

In his new capacity as chief of culture in Moscow, Kapkov has enlarged the project to include most of the capital’s parks. Big Moscow parks such as Gorky Park, Sokolniki and others, which used to be semi-neglected parks with rusty amusement rides and cheap beer, have turned into modern areas with lecture halls, children’s clubs, yoga classes, outdoor restaurant terraces, art installations, live music in outdoor rinks and bicycles for rent.

Incidentally, bicycles can now be rented from automated bicycle stations in many places across the city, along the Boulevard Ring and on the embankments. Parks are being reconstructed in line with worldwide trends in park development—bicycle rentals in Prague, for example.

The city has even enlisted the services of Danish urban planner Jan Gehl, to advise on improving Moscow streets. This summer, after spending a year and a half studying Moscow on the commission of the city government, he presented a full-scale report on how to transform the city. He was previously consultant to dozens of cities in various countries.

In Gehl’s opinion, the city should be friendlier to pedestrians and cyclists. He has proposed a multi-point program to reduce the number of cars, remove obstacles in the streets, make underpasses, link up all the Moscow boulevards, make squares more attractive for pedestrians, turn embankments into pedestrian areas, maintain active city life in the winter and develop infrastructure for bicycles.

Moscow’s municipal government has already taken some points of the program to heart. If the current trend is sustained, Moscow will soon become one of the most attractive tourist cities in the world.