Dangerous alliance between church and state 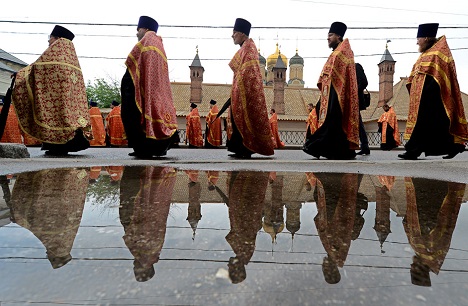 The Russian Orthodox Church has seen a rise in popularity over the last decade. Source: AFP/East News

The Russian Orthodox Church openly declared a crusade against multiculturalism, tolerance and other so-called Western values.

Russia officially celebrated Paratroopers Day on Friday. For more than 1.5 million men who serve or served as paratroopers, the day is a holiday, moreover one that is totally different than every other military holiday. On this day, paratrooper veterans have carte blanche to do strange things, which include getting drunk in the morning, fighting, and ritually bathing in the city fountains. On this day in provincial cities, careful mothers tend to lock their teenage daughters inside — and for good reason. Even Wikipedia warns that "the festivities are accompanied by fights, pogroms and public disorder."

But this year Paratroopers Day had a new twist. On all the billboards and posters in Moscow, the holiday had a dual title: "Paratroopers Day — ­Elijah's Day." The Orthodox Church does, in fact, commemorate the Prophet Elijah on August 2. But it's hard to understand what the ascetic hermit Elijah — aka "the first virgin of the Old Testament," who certainly never jumped out of a plane in a parachute — has in common with paratroopers who, by definition, aren't what you'd call pacifists.

Nevertheless, this isn't the first attempt of the Russian Orthodox Church to interfere in the traditions of public and military holidays. Not long ago, the authorities in Voronezh region officially prohibited celebration of the ancient Slavic holiday of Ivan Kupala. A few days ago, the church pressured the Navy to drop several traditions from Navy Day. In the past, actors played Neptune, mermaids and other creatures who, in the words of an anonymous representative of the Navy "were not on Noah's Ark during the Flood," as Interfax reported.

Declaring Neptune a persona non grata in the Navy may be comical, but it is indicative of the recent creep of clericalism into cultural and public life in Russia. Groups of aggressive Orthodox activists and Cossacks regularly attack art exhibitions showing "blasphemous" paintings and demand that theatrical performances be banned.

The Orthodox church is attacking science as well as culture. In June, the opening of a theology department at the Moscow Engineering and Physics Institute provoked good-natured protest from scientists. When a Proton rocket failed to launch properly on July 2, bloggers joked: "They cancelled physics and introduced theology. The missile hit the heavenly bodies and fell from the sky."

An entire school of pseudo-scientists have appeared, regularly bombarding the mass media with the sensational results of their "scientific research." For example, they have proven that reciting the Lord's prayer over a glass of water while making the sign of the cross "lowers the amount of harmful bacteria by 7, 10, 100 and even 1000 times."

Even more dangerous is the direct interference of the church in politics. The hierarchy of the Orthodox church openly declared a crusade against multiculturalism, tolerance and other Western values. It's no secret that the recent law limiting the rights of homosexuals was passed after strong lobbying by the church. In July, at the Moscow International Festival in Defence of Family Values, the attendees discussed measures to legislatively "safeguard children from the expansion of aggressive feminism, gender ideology and homosexuality," as well as to ban abortion.

One of the main speakers at the festival was Archpriest Vsevolod Chaplin, who is officially chairman of the synodal department of the Moscow Patriarchate and unofficially the mouthpiece for Patriarch Kirill. Last year, Chaplin produced a kind of manifesto in which he flipped the meaning of Sermon on the Mount 180 degrees. "We must be able to defend our sacred places, faith and homeland," Chaplin told Interfax "It does not befit Orthodox Christians to vie for the title of downcast victim that mass culture is urging on them. Evil must be fought with force."

Chaplin supported a recent law that made "insulting the feelings of believers" a felony. In fact, he believed that the punishment — three years maximum in prison — was "too mild."

During the last presidential campaign, Patriarch Kirill supported the candidacy of Vladimir Putin. "I must say openly as the patriarch who is called upon to speak the truth without paying heed to political trends," Kirill said during a campaign event, "that you personally, Vladimir Vladimirovich, have played an enormous role in straightening out the dark twists in our history." Earlier the patriarch called the relations between the Orthodox church and the state over the last 12 years "a miracle."

It is an axiom in modern society that the church should stand above the fray of political conflicts. A good example of this is the Catholic Church in Argentina, which has become a buffer between the militant opposition and the ruling junta — a mechanism that facilitated the peaceful transition to democracy in the 1980s.

During tsarist Russia, the Orthodox Church firmly stood on the side of the authoritarian monarchy, which largely destroyed its moral authority and alienated the liberal segments of society. In an ironic twist of fate, this alienation made it easier for the Bolsheviks to quickly destroy the church after the 1917 Revolution and repress the clergy.  It looks like the hierarchy of the modern Russian Orthodox Church didn't learn a lesson from that tragedy.

Victor Davidoff is a Moscow-based writer and journalist.