A voyage of marine discovery: Young scientists exploring the Arctic 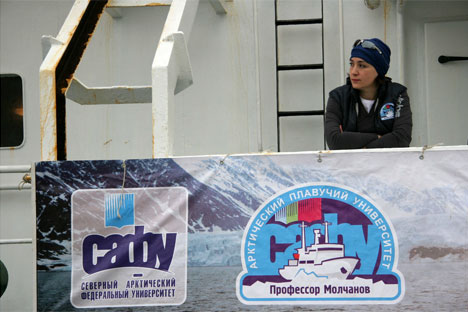 In 2011, a new and exciting educational project called the Arctic Floating University was founded – an innovative endeavor that allows young Arctic researchers to gain knowledge sailing the northern seas. The concept began in Archangelsk and is now attracting interest from Norway, Finland, Sweden, the United States, Canada and Germany. RBTH took a trip to Archangelsk and met with the third expedition of the Floating University.

Archangelsk stretches along the right bank of the Northern Dvina, a cold and expansive river that flows into the White Sea. It is 9 o’clock in the morning of 26 July. Dock number 150 of the Archangelsk Sea Port awaits the arrival of the Professor Molchanov research vessel, also known as the ‘Floating University’.

The blue-white ship’s young passengers – students and Russian university PhD candidates – line up on its starboard. After three weeks intensive study of the Arctic’s water, snow, ice and vegetation, they are now returning home.

The Floating University was founded in 2011 as a collaborative effort between the Northern (Arctic) Federal University (NArFU), the Federal Service for Hydrometeorology and Environmental Monitoring of Russia, and the Russian Geographical Society.

Arkhangelsk: Science's gateway to the North

Its mission is to prepare young specialists to work in Russia’s polar regions by exposing them to real Arctic conditions. Thus was born the Professor Molchanov research vessel, fitted with all the equipment necessary for a research laboratory.

The project’s first expedition set sail in 2012. The Arctic Floating University completed its second expedition in June 2013, and 26 July saw the culmination of it third mission.

“The Floating University isn’t an excursion,” explains Konstantin Bogolitsyn, who heads the project. “It’s serious work with a clear research plan. What’s more, it’s a course in oceanography, biology, chemistry, geography, complete with lectures, seminars and discussions about the results of our research. It’s a combination of education and science.”

“During an expedition, there are students and scientific researchers on board,” says Konstantin Zaykov, leader of the Arctic Floating University’s maiden voyage.

“Students come to the lectures and then put what they have learned into practice immediately at sea, applying this new knowledge and using the specialised devices. At the same time, scientists carry out their research and get students to help them. It’s a kind of miniature university."

The July expedition included work on the Karsk and Barents seas. For a duration of 24 days, the crew of the Professor Molchanov, along with a team of 50 junior researchers sailed on a round trip that started in Archangelsk.

The journey took the crew to the White Sea, Kolguyev Island, the Barents Sea, the Karsk Sea, the Severnaya Zemlya and Novaya Zemlya archipelagos before finally returning to Archangelsk, covering an impressive total distance of 4,150 miles.

The young researchers and their supervisors made periodic stops at 11 different sites on Arctic islands. While the ship itself remained out at sea, the scientists made it to the islands in paddle boats.

“We were at Cape Zhelaniye and made it to the Ice Harbour – the north-east part of Russian Arktic National Park. We saw with our very own eyes the remains of the Barents polar station and the memorial cross, which had been set on the site,” recalls Natalya Byzova, leader of the July expedition.

“Two people from the geoinformational systems team had been posted at Cape Zhelaniye ('Desire'), where they spent a week installing a wind turbine power plant. We had set off for Franz Josef Land, and when we got back a week later, the guys made us some tea that had been brewed on one hundred per cent clean energy.”

The average age of expedition participants is 20 to 21 years old. At 18, Ivan Lyubimkov is one of the youngest. He is a second-year student at the Institute of Natural Sciences and Biomedicine at NArFU , working towards a degree in theoretical physics. On the ship, he worked in the glaciological unit, studying arctic ice.

“We’re researching the electrophysical properties of ice,” Ivan explains. “The ice is formed from sea water, but if it freezes at a very slow pace, it is fresh and not salty. Our results suggest that it can even be used in food. It contains less salt than melt water that runs along the beach and collects minerals from the soil.”

In addition to the glaciological unit, the researchers also have access to oceanological, hydro-chemical, bioresource, physical chemistry and biological units aboard the vessel. All the materials collected during the three-week Arctic expedition – samples of ice, snow, saltwater and moss – will be taken back to the NArFU laboratory in Archangelsk for further study.

Trials of the sea

For most of those who took part in the Arctic Floating University aboard the Professor Molchanov, this was their first experience of a research expedition of any kind. The participants in the project were complete strangers before setting foot on the vessel.

Three weeks in a confined space and no contact with the outside world (with the added problem of no mobile phone coverage for the entirety of the trip, and the internet connection was sketchy at best) presents a real psychological challenge.

“We lived three people to a cabin. I worked during the day and rested in the evenings. I woke up at four o’clock in the morning and didn’t really have any contact with my roommates until lunch time,” Ivan recalls. “They had us really busy with work. There wasn’t much free time and you didn’t really have any time to think about the confined space you were in.”

“I was shocked that there were 50 of us, yet there was not a single argument over the course of the 24 days,” Ivan’s supervisor says.

And it was not just the students who had their mettle tested on the expedition. “We went to the shore in paddle boats, so we all got to experience what it is really like to lower yourself down into those boats from the ship using just a rope,” admits Lyudmila Vorzhtsova. “The main thing is to not think about what’s below – the very deep and cold sea.”

Hopeful young researchers are in abundance, all staking their claim to take part in the Arctic Floating University project.

Arctic ‘frost flowers’: Clue to origins of life on Earth?

Participants are selected through a competition, with only a limited number of places available. The cost of one expedition is as colossal as the aspirations of the project itself, weighing in at a roughly 35 million roubles (about $1.1 million). However the students do not pay a penny of the costs.

The majority of financing comes from NArFU, with the rest being provided by the Federal Service for Hydrometeorology and Environmental Monitoring of Russia, the Northern Division of the Hydro Meteorological Service and the Russian Geographical Society

Other countries have expressed interest in the project, primarily Scandinavian countries, but also Germany, Canada and the United States – countries where Arctic research is particularly important.

The Professor Molchanov will soon set off on a new expedition, this time along the Northern Sea route that was first explored by Fridtjof Nansen one hundred years ago in 1913. This will be the Arctic Floating University’s fourth expedition, organised by NArFU in conjunction with the Norwegian Tromso University and is expected to involve an international crew.