When adoption opens up a new world 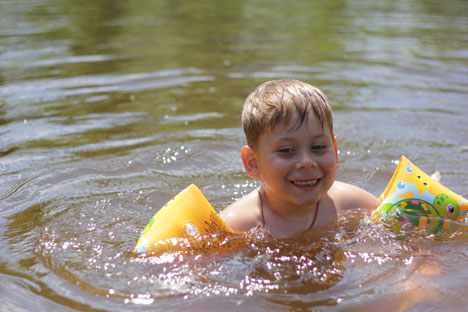 Styopa now has a real family with mother, two sisters a grandmother and even a dog. Source: Pravmir.ru

The moving testimony of a brave Russian woman who chose the more difficult path to adoption - welcoming a child with special needs into her family.

Styopa had been close to leaving the orphanage before. An American couple had met him, brought him presents and even a suitcase to collect his things before he left for his new home. Then the “Dima Yakovlev” law was passed, right before the court was supposed to hand the boy over to his new mom and dad. Styopa had to remain at the orphanage.

He turned out lucky anyway. In late May, a Russian family showed up for the boy, who can only move in a wheelchair. Mother Natalya Kazhaeva, two sisters - a 13-year-old and a 14-year-old, a grandmother and even a dog. Talking to Natalya, it’s difficult to figure out who is the luckiest between Styopa and his new mom: she thinks the little one is the best boy in the world.

“It all began more than twenty years ago. During my first marriage I was having trouble getting pregnant, so, after long tests and treatments, we began considering adoption. But that idea never became more than words. Immediately after remarrying (after divorcing my first husband, note of the editor) I gave birth to two daughters.”

“After having the girls, the thought of adopting a child faded into the background, but continually resurfaced. Whenever I watched a film or read an article on the topic I would feel a sense of guilt - somewhere out there a child was waiting for me, the one who I should have got but had not. Ten years later, unfortunately, my second marriage also ended... When I found myself alone with my daughters, I suggested: ‘Let’s expand the family and welcome children in need.’”

“Now when people come to me for advice, asking me to tell them how I adopted a child, I say: ‘The most important thing is not to rush. It’s imperative not to act driven by our own emotions here.’ Having firmly decided inside to adopt, I began to go through the stories of adoptive parents who share their experiences on the Internet. I began to study online parenting forums and search for as much information as available. At the same time I started looking up the online profiles of children seeking families.”

“Nothing happened for a very long time… Children with sad eyes looked back at me from a computer screen. I felt bad for all of them. And then, one day, I came across this boy on the adoption website Otkazniki.ru. He looked at me from the screen in such a way that I wanted to press the glass close to myself and not let go… Reading the file, I saw that the boy couldn’t walk. My first thoughts were: why do I need a child with special needs?, what would I do with him?”

“I cried for most of the night. I had had the realisation that those children are not different from the healthy ones and they need a mother even more. That very night I decided that I would take in that boy. I started talking about it to my daughters little by little… It was around November 2012. By late December I had already visited the Child Custody and Welfare Agency, collected the list of documents that I needed for the application, enrolled at a special school for adoptive parents.”

“In January I began training and gathering the documents. Fears and doubts remained with me, and that’s why I collected the documents very slowly. On April 17 my daughter called me and said: ‘Mom, it says on the website that our boy has been taken to another family.’ I then started thinking once again that a disabled child might not be right for me. The documents were almost ready and so I decided that I would take a healthy child from Samara.”

“I wrote about my intentions to a volunteer from the “Volunteers Helping Orphans” foundation. She sent me three links: “If you are prepared to accept a child with special needs, look at three more children.” The first contained Styopa’s profile. I showed it to the girls and we all said together: ‘That’s our child.’”

“The inspector from the Child Custody and Welfare Agency called the orphanage (in Moscow Styopa was staying at, note of the editor) and they said they would be waiting us. All the children had gone to sleep. Only Styopa sat in a group with his wheelchair - small, lonely, very sad. When they told Styopa that we had come to see him, the sadness on his face morphed into joy and surprise: “Can it really be for me?”

“Along with that were the anxiety and expectation that the fairy tale would end and that everything would just come to nothing. During our first visit we came with a volunteer, Lena. Styopa ran towards the both of us. He ate from my hands. ‘Mom, I have been waiting for you,’ he said. Orphanage children go up to everyone like this.”

“While we were walking with Styopa, he approached a man bearing gifts; he went up to him and said: “Dad, I have been waiting for you.” I came alone for the following two visits. Then, on a Thursday, once the agreement was signed, and the agency had prepared the documents, we went to pick him him with Lena. At that point I was already the only “mom” for him.”

“Styopa did not sleep the whole way to Samara, more than a day of travel away. He went through a visible outburst of emotions and excitement. He was really afraid of trains. Upon looking out of the window and seeing other trains going past us in the opposite direction, he would cling onto me like a kitten, trembling with fear. The first few days at home Styopa was starstruck. Everything astonished him, even a walk to the nearby square became an event. And finding himself in a regular park, Styopa got so confused that I only managed to get a couple pictures of him smiling.”

“Styopa learns something new every day. The hitherto unfamiliar realities of a world which most children know from infancy are opening up to him only now. For example, Styopa had never travelled on public transport. When we sat on a bus for the first time, he touched all the people on the vehicle, saying “Hello!” to everybody. He is so positive, bright, sincere, and has such a stunning smile, that everyone around also starts to smile. He travels peacefully on public transport now. Just the other day Styopa had the honour of helping the bus driver, passing him money and handing out tickets. He was so happy. The whole bus smiled as they watched him.”

“He also loves to help at home. “I am your assistant,” he always says. In two months, my little son has endured an unbelievable transformation. His stare has become confident and focused. His shoulders have broadened out. Looking in from the outside, he seems like any other child.”

"Obviously, Styopa’s health requires constant attention. We are currently undergoing treatment at the Samara Rehabilitation Center. We also often visit a speech therapist and psychologists. On August 12 he had to undergo surgery on his leg. He will now have to wear a cast for several months… Then it’s back to rehabilitation.”

“It is not possible to maintain an outside job with a child like Styopa. It turns out that I am now a full-time mom. We receive very little money from the adoption services in Samara - I get just over 12 thousand rubles. It would be very difficult for us without the help of caring people. A charity paid for the treatment at the rehabilitation centre, which cost 115 thousand rubles. Volunteers collected six thousand rubles for orthopedic boots.”

Federal agency on orphans may be created in Russia

“We have recently run into a serious problem – not having a car. Since the child gained five kilos during the first month and a half after I brought him home, it is difficult to go anywhere with him now, even though I lifted him so easily in the past.”

“I dream of taking in another boy, one with cerebral palsy. I have been following his fate for quite a while now with the help of Otkazniki.ru. Why would I decide to take in other children with a serious disability? (Through my experience, note of the editor) I have come to know a completely different world. Reading the stories of these children online, you understand that they only have two paths – a lifetime in a home for the kids with special needs or a family. There is nothing else.  As Lena, the volunteer who helped me in Moscow, said: ‘You get the feeling that the house is on fire and there are tens of thousands of children in it, but you can only rescue two or three. And all of them tug and pull your arm…’

“And if I hadn’t taken Styopa just because he was not well, preferring a healthy one, how would I differ from those parents who abandon their sick children at the hospital?"

First published in Russian in Pravmir.ru.