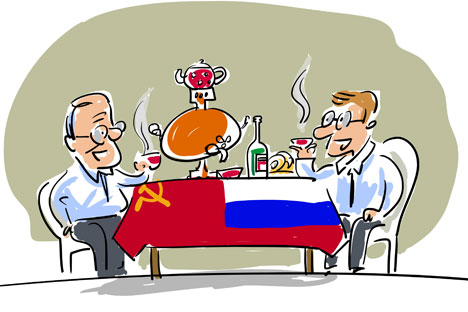 The debate surrounding the consequences of the Soviet Union’s fall continues to rage in Russia. Politicians talk about it on TV, historians share their thoughts in the papers and family members discuss the issue over a cup of tea. So what was life during the demise of the USSR like?

At the time the country was once again facing shortages of many consumer goods and foodstuffs after a period of relative prosperity in the late 1960s and 1970s. Quality food and clothes were only available in Moscow and St. Petersburg, in the capitals of the Soviet republics and in the Far North.

Meanwhile, even potatoes were sometimes in short supply in the provincial cities of central Russia. The clothes on display in the shops were so drab that many women resorted to taking sewing and knitting lessons in an effort to dress slightly more fashionably.

Nevertheless, we were enjoying (as we still do) some of the greatest perks of living in the USSR: free universal education and healthcare. The Soviet constitution of 1977 enshrined the right of every Soviet citizen to receive completely free education, from primary school to university.

In practice, even back in the early 1930s, some 98 per cent of all boys and girls who lived in the cities and villages attended primary school, and by the early 1960s all children across the country received a minimum of eight years of universal education. Similarly, healthcare had been free since 1917.

Another thing to note is that the Soviet Union had a very strict system of residential address registration in the 1980s. That system divided Soviet citizens into the higher caste of those living in Moscow and St Petersburg, and the lower caste of provincials.

Even students at the leading universities in Moscow and St Petersburg had to leave the city upon graduation unless they were registered as local residents. The best way to remain in one of the two most prosperous Soviet cities was to marry someone already registered there.

Viktor Tsoy, the legendary pop idol in the Russia of the late 80s and early 90s, expressed the prevailing mood among the youths in those days with his famous lyrics: “Change! We want change!” The 1990s certainly did bring some radical changes. For some, it was an era of dreams coming true. For others, it was a time of bitter disappointment and broken promises.

The 1990s kicked off with a now-infamous privatization campaign, which translated into well-connected individuals grabbing valuable state-owned assets. As a result, the country got its first millionaires and business tycoons. Meanwhile, tens of millions of Russians had lost all their savings to runaway inflation in the space of just a few months in 1992.

Russians are still extremely disgruntled – and rightly so – about the outcome of the privatization campaign and the loss of their savings. They tend to forget, however, that as part of those reforms, the government also made them the rightful owners of the flats they lived in at the time.

By the early 1990s more than 70 per cent of Soviet families were living in cities and towns, mostly in apartments they did not own. The housing stock was predominantly owned by the state, and tenancy rights depended on the employment status.

In 1992 the government allowed tens of millions of tenants to privatize the flats they were living in free of charge. That free privatization offer stands to this day, and about 80 per cent of the tenants have already completed the privatization procedure.

In the 21st century

Whereas the 1990s were an era of revolutionary change, the early 2000s brought a degree of stability and normalcy. The reforms implemented in the 1990s were not reversed, but they were rather built upon in various ways.

Upon coming to power in the 2000s, Vladimir Putin announced that his priority was to ensure the supremacy of law. Up until that time, very few Russians had a clear idea of what that term actually meant in practice.

During the Gorbachev era, the focus was on openness and transparency (“glasnost”), while Yeltsin had placed an emphasis on democracy and free elections.

Meanwhile, the income and living standards of ordinary Russians were rising rapidly, finally overtaking the levels last seen in Soviet times. In 2012 the World Bank moved Russia to the category of high-income economies.

Finally, the demographic situation in Russia began to improve in the late 2000s. This is seen as a sign of growing economic confidence. The government policies that encourage families to have more children, launched in 2004, have also played a role.

In 2009 the Russian population finally reversed its long decline; it is now growing by about 200,000 people every year.

If you talk to former Soviet citizens about the break-up of the Soviet Union, you will probably get a million different opinions. And maybe our very own ability to argue so openly about our common past is one of the major achievements of the post-Soviet era.