US, Italy to compete in Russia’s next tank biathlon 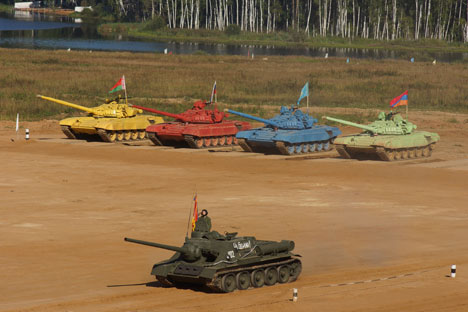 This tank biathlon epidemic struck the army in July: Each military district selected three of their best tank platoons to take part in the finals in Alabino near Moscow. Source: Sergei Micheev

The International Tank Biathlon Competitions finished on Aug. 17 in Alabino. Russia, Armenia, Belarus and Kazakhstan fought for first place. A Vedomosti correspondent visited the test run to find out what this new Russian amusement — the tank biathlon — really is.

At 10 a.m., I climbed up to the observation deck on the Alabinsky Range. There was already a crowd of 30 soldiers carrying walkie-talkies and wearing armbands with labels like, “Simulation Assistant,” and, “Deputy Chief Supervisor.”

I had an extraordinary view from the observation deck. Four tanks with red, blue, yellow and green colors were lined up in the foreground. A plain with fabricated mounds and potholes stretched in the background.

There was a warm, light breeze. The plain was enveloped by a mist, which made it impossible to see either the targets or the roadway — two important components of the biathlon.

While the judges were discussing something, I spoke with a member of the competition’s organizing committee — a retired colonel, who, for some reason, requested that his name not be published.

“Why was tank biathlon invented?” I asked.

The colonel explained: “So that the troops can manifest a spirit of competition, to get away from the daily routine of the army. Before this, exercises were simple and boring: The soldiers drove up, shot and went back. But now here they have obstacles, range practice shooting, and, in general, they compete against one another!”

On test rides, the crews had to complete a small circuit with an obstacle course, while shooting at targets. The colonel explained that these circuits were made to test the T-72B tanks in action, which the visitors used.

Then the command: “Action Stations!” Test rides began with entertaining numbers. The announcer greeted the audience, stirring music began to play and a group of boys and girls ran to the concrete launching ground in the center of the polygon.

This tank biathlon epidemic struck the army in July: Each military district selected three of their best tank platoons to take part in the finals in Alabino near Moscow. The best Russian crew was a team from the Western Military District, which took part in the international competition and won.

The military officers were awarded the competition’s trophy — a model of a T-34 tank. Crews from Belarus, Armenia and Kazakhstan were awarded medals from the Defense Ministry of the Russian Federation, “For Strengthening Military Cooperation.”

“Dancers,” they told me. Then four spotted tanks appeared, forming a shape similar to a flower. The four tanks began to circle around, coyly shaking their guns.

Dancers, who heard only some fragments of the “Sabre Dance,” tried to dance, but it was clear that the roar of the engines blocked all other sounds. Nevertheless, after five minutes, the audience forgot about the music, as a howitzer drove onto the range and slowly but surely raised its gun barrel.

A gun volley rang out, so powerful that one of the dancers collapsed on the concrete polygon next to the howitzer, clasping her arms around her head.

Finally, it was time for the biathlon. I went back to the observation deck, where the judges took their places at the tables and observers lined up behind them—each with a binocular telescope.

“Armor units to starting positions!” This was heard on the walkie-talkies. Multi-colored tanks came to life, roared and became shrouded in a cloud of smoke.

Having easily passed the “snake” test, the tanks lined up at the firing line and began to charge their guns with anti-tank ammunition. The first target was a full-size, mock-up tank. It stood at a distance of 1.5 miles from where we were standing, and, in my opinion, it was impossible to see.

Apparently, the crew of the red tank shared my opinion: In three shots, the tank did not hit the target even once, and was sent to the “penalty circle.”

Meanwhile, the other tanks were already overcoming other obstacles: the fording site, the treadway bridge and an escarpment. All was going well and the tanks began attacking the second target—a mock-up helicopter. They shot at it from a distance of 5,250 feet, using anti-aircraft machine guns.

In the third round, the green and blue tanks managed to pass part of the way moving side-by-side, with one almost cutting in front of the other. The commentator was delighted, but the faces of the judges showed disapproval.

The tanks had shot at the third target (which was in the shape of a hut), passed over the rest of the circuit and lined up in front of the command post. The leader of the test run became the yellow tank, which passed through all the stages in 5 minutes and 28 seconds.

One-by-one, the tank crews came out through the hatches, ran across the parade ground and lined up at the entrance to the command center. From the observation deck, we could see their heads in round helmets, swaying like sunflowers.

When I came down from the tower, the silhouettes of tank crews were visible on the slope of the mound. After this difficult test, they started returning to their units. Bickering, they went out of sight.

The parade ground became completely deserted; there remained standing only a lonely army tent with a thrown-back canopy. It was dark inside, while, outside, a banner that read, “Welcome to the Armed Forces of the Russian Federation!” was fluttering in the wind.

Gen. Sergei Shoigu, defense minister of the Russian Federation, congratulated the winners of the first All-Army Tank Biathlon Competitions and expressed his hope that such competitions will become a tradition, as well as a powerful factor in strengthening ties of friendship and trust between the states. “Hopefully, more teams will participate next year. In any case, our colleagues from the U.S. and Italy have responded to our invitations, and we are waiting for a response from Germany,” said the minister, noting that, if these countries participate, this would become “quite a different competition.”

Abridged and rewritten. First published in Russian in Vedomosti.