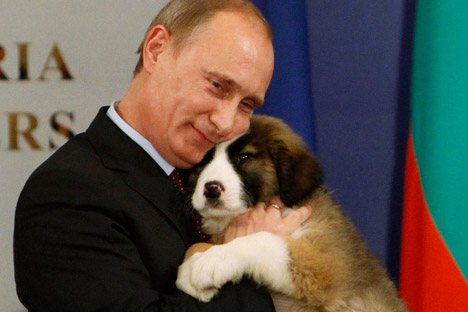 Gifts given to President Putin and Prime Minister Medvedev will be exhibited online.

A variety of gifts — from a crystal crocodile to a real elephant — have been presented at different times to the heads of the Russian state. There have been occasions when expensive Swiss watches were given as gifts, as well as a jar of jam. It will soon be possible to see all of these gifts in a virtual museum, which is being set up by the Office of the President.

Historians recreate the Yeltsin era for the youth

According to the document, the EGF will consist of two parts — a system accounting for the gifts presented to top officials and souvenirs presented in the name of the Russian government.

Each gift presented to an official will have its own registration card, on which will be written its size, weight, value, origination and the date and circumstances of its receipt, reports the newspaper Moskovsky Komsomolets. The gift itself will be described and photographed in detail. Thus, it will be possible to rotate it in your hands virtually, as well as zoom in for a closer look.

In the EGF there will be 3-D models of the gifts in the “hemisphere” format (rotation on different planes) and the “cylinder” format (rotation on one plane). At first, the image and information base will only be accessible to officials in the administration of the president; however, in the future, every Russian citizen will be able to look at the electronic exhibition of presents on a separate site.

According to current regulations, all gifts given to the president of Russia during the execution of his presidential duties are considered the property of the state.

Gifts given by citizens are submitted for entry into the inventory after being checked over by security officials; they are kept in the Kremlin Library and a special storage place located in the Kremlin.

By law, the president may only keep for himself gifts that do not have a value exceeding five times the minimum wage (this is less than $1,000 dollars). If the present is valued at a greater sum but the president still wants to keep it, then it is appraised and he must pay for it out of his own pocket.

The most famous gift is Koni — the Labrador given to the head of state by the Minister of Emergency Situations, Sergei Shoigu. The following also gave animals as gifts: former Moscow Mayor Yuri Luzhkov gave a goat; the king of Bhutan presented an elephant calf; the emir of Abu Dhabi gave an Arabian steed; and Nursultan Nazarbaev, the president of Kazakhstan, presented a gazelle doe.

American billionaire Robert Kraft gave Putin the diamond signet ring worn by American Superbowl champions. Georgi Yartsev, the Russian soccer team coach, gave the Russian leader a golden boot. Many paintings have been given to the head the state and transferred to the Kremlin Museum.

“Butterflies”—a picture made not with paint but with crushed stones of various colors — was given by the former president of China, Jiang Zemin, and placed in the Kremlin Library.

Mahmoud Abbas, head of the Palestinian National Authority, honored Putin by naming a street in Bethlehem after him.

Among the gifts to Putin, there are also Swiss watches, a copy of the Cap of Monomakh from Russian jewelers, a crystal crocodile from Moldovan President Vladimir Voronin, a map of Russia’s federal regions done in jasper from the Urals, and the hymn of the Russian Federation sung by more than 60,000 people in the center of Grozny.

While serving as president, Dmitry Medvedev personally received an iPhone 4 from the head of Apple Corporation, Steve Jobs. Two former U.S. secretaries of state — George Shultz and Condoleezza Rice — gave him a Soviet poster from the 1920s that urges people to seek knowledge.

Venezuelan leader Hugo Chavez brought chocolate, cocoa and a jar of banana jam for Medvedev. In addition, the Palestinian Authority named a street in Jericho after the former Russian president.