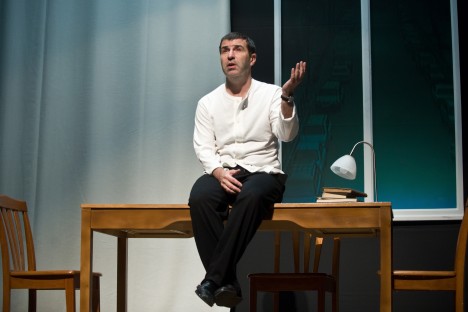 Special sites are collecting donations for cultural and business projects.

The conflict between Russia's Ministry of Culture and the well-known animator Harry Bardin showed that Russians are willing to pay for cultural projects out of their own pockets.

Music, theatre, documentaries and environmental products are projects that collect the most money on crowdfunding sites.

Harry Bardin, a legend in modern animation, was accused by officials from the Russian Ministry of Culture of missing the deadline for finishing an animated film and charged a fine of 200,000 rubles ($6,000).

The maestro of animation found the money to complete his "Three Melodies" project on the Internet by using crowdfunding — a fundraising system that is new to Russia.

Harry Bardin's video appeal on the Planeta.ru crowdfunding site explained that millionaires had not given money for his new animated film, "Three Melodies," and that he was appealing to ordinary people. Ordinary people did give him financial support: Money was collected for the film and the fine.

The first crowdfunding services that managed people's donations appeared in Russia a year and a half ago. They quickly became popular for those who had ideas but lacked the funds to make them happen.

In order to request money for a project, all one has to do is upload an appeal to the website. The two most talked-about sites in Russia are BооmStаrter.ru and Planeta.ru. They both were able to raise more than 25 million rubles ($752,000) in one year.

"Crowdfunding started to develop in Russia to donate money to famous groups and singers, so that they could record albums," says the PR director for Planeta.ru, KaterinaChechulina. "It's all because musicians inspire so much confidence and loyalty."

Members of the BI-2 group were crowdfunding pioneers among musicians in Russia, raising 1.26 million rubles ($38,000) to record their “Spirit” album.

A little while later, directors of plays, festivals and films, as well as actors and artists, turned to crowdfunding. Just a year ago, the proportion of music projects on Planeta.ru stood at 90 percent; now it is around 30 or 40 percent.

"It would seem to be more difficult for those who don't get airtime on TV to collect money. But if you make a video appeal and explain what will change in the world if the project goes forward — who will be helped and what problem will be solved — then you can request money to build a new hospital wing, fix the roads, or repair a vehicle, fence, or the entrance to an apartment building."

For example, fans believed in documentary filmmaker Yelena Pogrebizhskaya: She described in a video that, because of her last film, orphans are no longer sent to psychiatric hospitals after they commit some minor offense in an orphanage.

Pogrebizhskaya requested 400,000 rubles ($12,000) for her new film and collected this amount in just three weeks. Likewise, playwright and writer Yevgeny Grishkovets very quickly received about a million rubles ($30,000) in donations to release the video version of his “+1” play.

Crowdfunding websites contain projects that vary in size — from collecting money for a short film required to complete a degree, to premiering a play with well-known names. There are fewer business projects.

Recently, however, a supplier of LаvkаLаvka (a line of environmentally friendly products) requested 500,000 rubles ($15,000) to open a new store. The amount was collected in three days. All of the most expensive shares were bought in one day, at 100,000 rubles ($3,000) each, and the gift was a cooperative membership card to the LаvkаLаvkа family.

Typically, to draw sponsors in, crowdfunding sites give away concert tickets, master classes from animators, or books and autographed CDs. According to the statistics, the average donation on Planeta.ru is 1,200–1,300 rubles ($36–40), which is more than on American sites.

"In order to receive donations, you need to work at it: Fill your page every day with news, spam friends, share the opinions of participants, and constantly look for informative ways to promote yourself.

This is daily work and, to do it, you need to be a certain type of person," says Saba Lagadze, one of the organizers of the Theatre Almanac festival for one-act plays.

Lagadze’s site actually broke all the rules. His video appeal was more like a short film, in which actors had cubes in place of their heads and voices were changed to sound robotic. The idea worked and the festival of one-act plays was held.

Still, crowdfunding beginners find it difficult to draw attention to their projects without advice from the site managers. If the project does not collect 50 percent of its goal, all donations are returned to the sponsors and the crowdfunding site does not receive 10 percent of funds collected.

Crowdfunding has existed in Europe and America for five years already. Users in those regions of the world are used to the system and use it more pragmatically, trying to get new gifts as cheaply as possible.

Russians like the sense of belonging to a popular or well-known project — and, for the right amount, their names could be immortalized in the credits.