Is Russia's 'gay propaganda' law alienating it from the West? 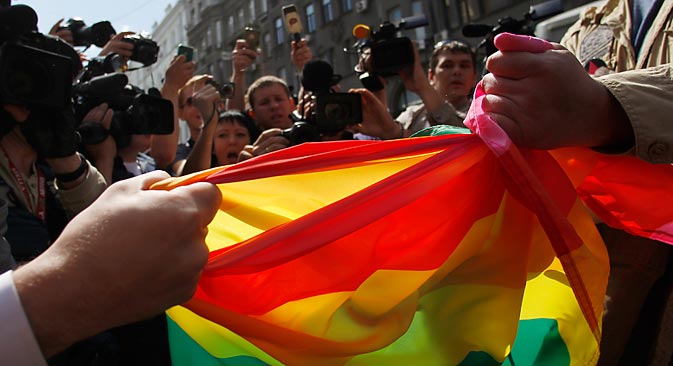 LGBT rallies and gay-pride marches have been banned by the Moscow City Hall for the last seven years. Source: Reuters

In response to Russia's recently adopted "anti-gay law," people in cities all over the world are boycotting Russian vodka and talking of severing sister-city ties. Despite this criticism, which comes mainly from Western audiences, Russian lawmakers insist that the new legislation was created only to protect children.

Popularly labelled “Russia's anti-gay law” in the West, the bill has attracted fiery international criticism for its implications for the human rights of Russia's Lesbian, Gay, Bisexual and Transgender (LGBT) communities.

Lyudmila Alexeyeva, former Soviet dissident and co-founder of the human-rights watchdog the Moscow Helsinki Group, has called the legislation "a step toward the Middle Ages."

But Kirill Kobrin, journalist and historian at Radio Free Europe's Russia Service, has a different take: “it was unthinkable to even discuss these issues twenty years ago in Russia,” he says. Kobrin thinks there has been a major shift in public consciousness that now, under the Kremlin's lead, LGBT rights are the focus of public attention and debate in Russia — albeit [following the adoption of new law] censored debate.

Elena Mizulina, the controversial deputy who co-authored the legislation and heads Russia's State Duma Committee on Family, Women, and Children, has said that the law aims to protect children from information that rejects "traditional family values”.

Russian President Vladimir Putin has expressed his support for the new law, saying its purpose is only to “protect children.” Putin  has also said that homosexuals are “not being discriminated against in any way.” But how, critics wonder, is this legislation anything but discriminatory?

To argue that homosexuality is somehow both shameful and not to be discussed and that homosexuals won't be discriminated against is something the West can't get its head around.

Russia's Human Rights Commissioner, Vladimir Lukin, said on June 11 that the "unwise application" of the legislation could lead to "human casualties and human tragedies.”

Where has the law come from?

For a country that has its fair share of problems requiring government attention, Russian lawmakers seem strangely preoccupied with defending traditional models of monogamy. They are even discussing legislation that will limit the number of legal marriages a person can have.

The adoption of the anti-propaganda bill followed a wave of similar laws being passed across Russia in 11 regions and in the city of St. Petersburg. So is the Kremlin just responding to a rising popular sentiment?

St. Petersburg's version of the law has already been used in an attempt to prosecute Madonna for pro-gay comments she made at one of her Russian concerts.

Vitay Milonov, the architect of St Petersburg's version of the law, also threatened to sue Lady Gaga for gay propaganda. His attempts, however, were dismissed in court, and Milonov became the object of international ridicule following an interview he did with British comedian and social commentator Stephen Fry.

Aside from regional conservatism, the Russian Orthodox Church has arguably been a force behind the legislation. The head of the Church, Patriarch Kirill, is well known for expressing homophobic vitriol. Kirill told a congregation at Kazan Cathedral in Moscow's Red Square this July that same-sex marriage is a “dangerous sign of the apocalypse" and that such recognition "means people are choosing a path of self-destruction."

What the anti-propaganda law means in practice

Under the new legislation, private individuals promoting "non-traditional relations among minors" may face fines of up to 5,000 roubles ($155).

Same-sex sexual relations were decriminalised in Russia in 1993, when Russia's “anti-sodomy law” (which dated back to 1934) was revoked. In 1999, homosexuality was removed from Russia's official code of mental illnesses, however, anti-gay sentiment remains high and is mainstream.

No political parties in Russia support sexual minorities and there are no statistics (official or unofficial) that indicate how many people identify as gay.

Not long after the adoption of the anti-propaganda law, on July 3, President Vladimir Putin signed an amendment to the Russian Family Code banning gay and lesbian couples in foreign countries from adopting Russian children. The bill had been unanimously passed by the State Duma in its third and final reading. Russian same-sex couples aren't recognised in Russia and can't adopt.

LGBT rallies and gay-pride marches have been banned by the Moscow City Hall for the last seven years, and the former Moscow Mayor Yuri Luzhkov famously called such gatherings “satanic”.

Some LGBT groups who have tried to hold parades in Moscow and St. Petersburg without permission have come under attack from violent mobs and have been detained by police.

Gay activists have also been publicly attacked by extremist Orthodox Christians, being spat on and pelted with rotten eggs, while staging peaceful protests.

Graphic photo campaigns of mob and police violence against LGBT protesters have been circulating on social media, triggering outrage and garnering international concern for the safety of Russia's LGBT communities.

Despite these campaigns, there are no official figures about how many LGBT protesters have suffered physical violence as a result of their activities.

The most shocking example of violence against supposed members of LGBT community took place this spring, when a young man, supposedly a gay, was murdered in the city of Volgograd - his body being violated with beer bottles and head being crushed with a rock. However, there are still no hard evidence that he really was a homosexual.

The law has provoked strong international criticism, suggesting that its adoption has significantly widened the cultural gap between Russia and the mainstream liberal West.

A number of celebrities have caused controversy in Russia by speaking out on behalf of Russia's LGBT community over the past year. In June, for example, a photograph of actress Tilda Swinton holding a rainbow flag in front of Moscow's Kremlin went viral on social media outlets.

Some LGBT groups in the US have called for a boycott of the Russian Winter Olympic Games in Sochi next February, to protest the new legislation. Others, however, are suggesting – instead – that the Olympics be used as an opportunity to put pressure on the Kremlin to revise their stance on LGBT issues.

The International Olympic Committee has released an official statement saying it will "work to ensure" no discrimination against LGBT participants occurs at the Games.

Pressure has also been put on some city's administrations to sever sister-city connections in Russia.

The mayor of Iceland’s capital Reykjavik, for example, has advocated cutting its sister-city relationship with Moscow over the legislation. 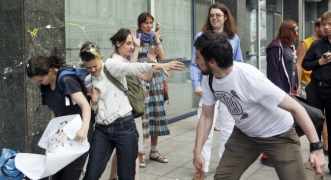 And Melbourne City Council received a petition with 10,000 signatures, demanding that it do the same with regard to its ties with St. Petersburg.

However, in the face of popular and official criticism, the Kremlin is standing resolute. Many Russians don't understand the dramatic and emotional response the legislation has provoked in the West, insisting that the law isn't anti-gay but anti-propaganda, and designed – merely – “to protect children.” But in the West, people are wondering: protect them from what?