Life goes on in the epicenter of Far East floods 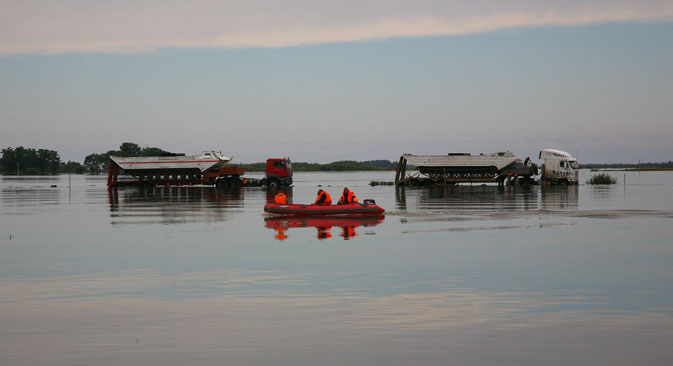 Over 60 communities with a combined population of almost 36,000 stll remain in the flood zone in the Far East. Source: RIA Novosti

Residents of flooded areas are adapting to new living conditions

Russia’s Far East has entered a second month of flooding, leaving flooded cities and villages in the waters’ wake. People have been forced to live on rooftops and even in the vacant cars of passenger trains.

The area’s climate is northern and temperatures should drop below freezing within weeks, making the situation even worse. Locals are confident, however, that the water will recede to a safe level before then.

Victor lives in a military settlement 11 miles from Komsomolsk-on-Amur, where the flood is peaking. He is lucky, because his settlement sits on top of a hill and its streets are still walkable. He says that the water there does not usually rise higher than it does in Khabarovsk.

“If the water rises by 4.5 meters [about 15 feet] in Khabarovsk in spring, we have four meters, tops. Water spreads evenly among the lakes near the Amur and doesn’t stay high for long. The current phenomenon can be explained by the fact that Komsomolsk is downstream from Khabarovsk and there’s a bottleneck here: There’s more water than during spring floods, and it rises faster, so the waves surge like a tsunami, but in slow motion,” Victor says.

“The narrowest place is within the city limits, near the bridge across the Amur — the water is at the highest point there. The bridge has been completely submerged.”

It is important for people to have access to fresh drinking water now, because wells have been flooded. Furthermore, in addition to mud and silt, the “big water” is also carrying remains from cemeteries, which have also ended up in the groundwater.

“The heaviest floods are in the Jewish Autonomous Region. The river instantly surged by 10 meters. Then Blagoveshchensk drowned. There’s the Sungari River there, which added it waters too. The media reported this in passing, even though they had more water than Khabarovsk,” says Victor.

Since the water started receding in Khabarovsk a week ago, the locals are now expecting it to retreat in Komsomolsk too. For now, however, the water level exceeds nine meters.

“We hope it goes down by a meter or a meter and a half, so that we can drive on the highway. It will be freezing cold come October, and I hope the ground doesn’t turn into a skating rink. From an airplane, you can only see hilltops sticking out from the freshwater sea,” Victor says.

The military settlement resident treats the situation with a dose of humor. “I live on the fifth floor, so I’m good. And, in case the water starts rising, I have a motorized boat in the garage. I’ll survive one way or another,” he says with a laugh.

Victor plans to move to Western Russia: In order to not sell his car, he decided to drive and is now waiting for the roads to clear. “My wife makes fun of me: She says we’ll have to load the car onto the boat, and then the boat onto the car, to get to our destination.”

Recently, a dam broke in the village next to Victor’s settlement, and, 40 minutes later, one-level homes were all underwater up to their roofs. It happened during the daytime and many residents were at work, so there were no casualties, but cows and other animals could not be saved. People now live on rooftops.

“On the one hand it’s scary, but, on the other, what are you going to do? You feel really small when faced with the incredible power of nature,” Victor says. “And it’s obvious that nothing can be done to the water, so all we can do is wait.”