The other Sochi: A tale of disrepair 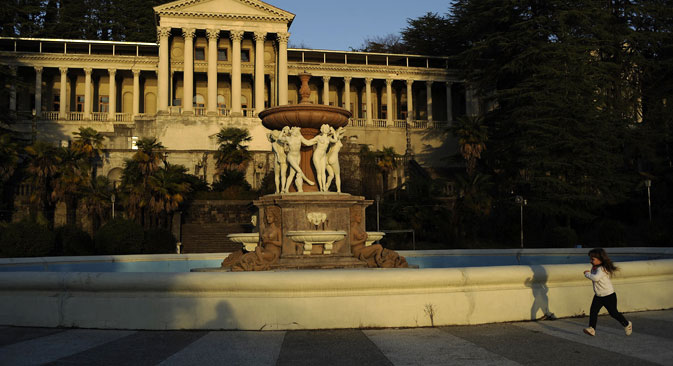 With construction, Sochi landmarks are neglected.

On a recent summer morning, a group of students gathered on the half-ruined stairs to the Ordzhonikidze spa hotel, once the architectural pride of Sochi. Built by Stalin’s commissars in the 1930s, it is now an abandoned palace.

The students posed in front of a fountain decorated with three nude statues, the highlight of Soviet Sochi attractions that for years served as a visual business card for Russia’s only tropical resort. It is now empty with dry leaves piling up around the foundations.

The students have been working on a photo project they call “Disappearing Beauty.” Marble walls and massive columns decimated by disrepair symbolized for them the neglect of their once peaceful tropical city.

Until recently, thousands of tourists and local visitors enjoyed the colorful variety of Sochi’s beautiful parks and gardens, marveled at gorgeous flowerbeds and water splashing in the fountains; couples kissed on terraces overlooking the Black Sea.

Opinion: What the Sochi Olympics mean to Russia

But the Olympic rush has taken the place over – bringing crowds of contract workers, cranes and bulldozers to every corner of Sochi. The remains of Stalin’s dream, the Soviet Riviera, has been lost in the construction chaos, among glass and concrete emerging in place of once romantic magnolia gardens and grape gazebos.

Outside Ordzhonikidze’s gate people waited at a bus stop on Kurortny prospect, the only main street in Sochi. Tourists complained of the slow traffic, high prices and dust from the construction. “We thought of coming here we would escape Moscow traffic jams; I dreamt of walks in the Dendrarium park, but Sochi is not the same any more – the road is jammed and our favorite park is closed,” said Lyubov Zakurova, a pensioner from Moscow and life-long admirer of the resort.

The girls on the stairs shared their feelings about the most recent changes to their city of 368,00 people. “We document the environmental issues in Sochi on our social network web pages,” Valeria Smirnova, 19, explained. 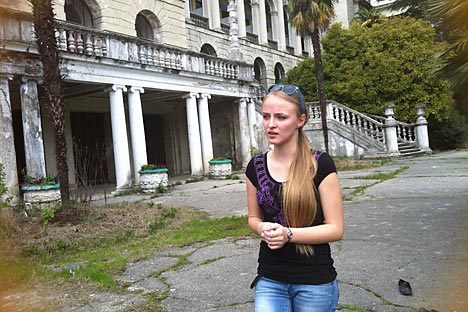 “It is sad to see the most beautiful things disappear, so we hope that if we capture pictures of dead dolphins on city beaches, write about dying trees and fish trout poisoned in our Mzymta river, the authorities would pay attention and think of people who will continue living in this town after two weeks of Olympic games,” Smirnova, a student of journalism, added.

Two years ago authorities closed the Ordzhonikidze hotel for reconstruction, built a high metal fence around it and put a “stop” sign at the entrance. No one knows when it will open. The funicular that once brought both tourists and local people to the beach also stopped functioning.

Humidity and wild nature took over the old Sochi’s walls.

Also troubling, authorities continue to demolish hundreds of illegally built and public homes that happen to be in the way of construction. This summer, 400 homes were in the path of the bulldozers.

In Sochi, Bulldozers are a bad sign for some residents 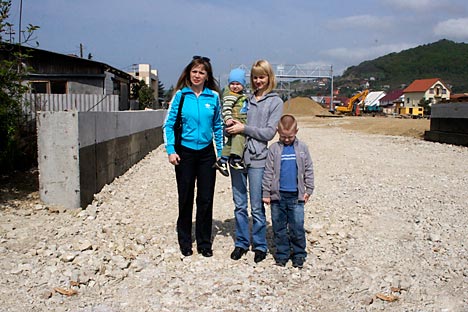 Sochi authorities continue to demolish hundreds of houses that are in the way of Olympic construction work. It costs the state more than 3 million rubles to tear down one small house and up to 40 million rubles to demolish a multi-story building. Deputy director of the Federal Bailiffs' Service Tatyana Ignatyeva confirmed that more than 400 Sochi houses will be bulldozed before the Olympics commence.

Yulia Saltykova, 32, a mother of two boys, four and ten years old, has never seen much comfort. She lives a hardscrabble life on Acacia Avenue in the Adler district of Sochi. Three generations of Saltykova’s family live in a state-provided barrack-style building without kitchens or bathrooms, without running water or gas supply.

Without help from the municipal authorities, Saltykova’s parents and their neighbors built all necessary facilities for themselves in the courtyards of their homes.

Sochi tried its strength before the forthcoming Olympics

The neighbors hoped to live a peaceful life enjoying the view of the North Caucasus, in the shade of thorn trees on a lovely road to the nearest beach on the Black Sea.

The day Sochi was selected to host the Winter Olympics 2014, Saltykova, euphoric, celebrated and cheered the victory together with all her neighbors and friends. Crowds partied all day along the sea embankment, and more than 30,000 people gathered in the city square downtown to sing, dance and drink Champagne.

Troubles came to house No. 5 on Acacia in waves. All day long loud trucks and bulldozers, unloaded tons of sand and gravel onto once a quiet passage to Acacia street to build a federal highway for thousands of spectators of approaching Olympic games.

A concrete wall along the future road with plastic screen on top of it grew higher, completely blocking Saltykova’s favorite view of the snowy mountaintops. “The complaints that we sent to the Kremlin and Human Rights Watch made our authorities even angrier – the city is suing us for not demolishing our kitchens and toilets, that we happened to build years ago on the way of the new highway, “ Saltykova said in frustration. “Turns out we do not have a right even for our outside toilets.”

A red banner spread on the roof of Saltykova’s house reads "Help! SOS! They're walling off people alive in here."  But not many pay attention, as more benefit from the construction boom.

On the day the court decided that Saltykova and her neighbors must demolish their property to let the state construction continue, a press spokesman showed journalists around the Olympic village. There was still a lot for the construction company Olympstroy to do before the Olympic opening scheduled for February 2014.

What did the organizers think about people who are dislocated by the massive project? “This is not a question for us – ask the ministry of regional development in Moscow,” spokeswoman Natalya Cherepanova said.

In August, the Sochi administration informed Alyona Khaladzha, 65, that her house on Zheleznodorozhny Proyezd in the Adler region is scheduled for demolition on December 25th. “I am totally shocked – no officials wanted to hear that I’d been in line for privatization for the last 20 years, and I am number 88 on the list,” Khaladzha said, through tears.