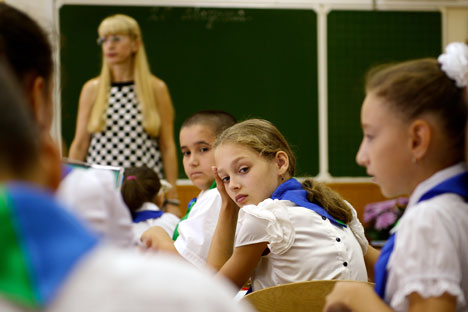 Teachers in Russia confront a new round of educational reforms and students who would prefer to play on their phones than pay attention. Source: ITAR-TASS

During the Cold War, American students were told to study hard to compete with their Soviet counterparts. How does Russian education stack up today?

Svetlana Levkovets, a 49-year-old teacher from St. Petersburg, has grown accustomed to competing with mobile phones in the classroom. Levkovets says she tries to come up with homework that forces her students to work without technology. “Just give the kids assignments where they have to compare facts,” she said, “and the Internet will be of no help.”

But today’s Russian teens have more up their sleeves than just their gadgets.

In May, answers to the Unified State Exam, or Ye.G.E., which was intended to revolutionize Russia’s secondary education system by replacing the more subjective exams given to graduating seniors, were leaked to Vkontakte, the huge social network sometimes called Russia’s Facebook.

Opinion: From no child left behind to every man for himself

Lilia Brainis, 24, who taught for three years at Moscow Lyceum 1535, often considered one of the capital’s best schools, said that there is no point in fighting the battle against technology. In an era when all answers can be found online, it’s the teachers who have to adapt, she said.

Irina Abankina, director of the Education Development Institute at the Higher School of Economics, believes that the Ye.G.E. issues are a reflection of the lack of values in modern Russian society and that, all in all, education reform is moving in the right direction.

According to data from Abankina’s institute, since the Ye.G.E. was introduced in 2009, the number of students who moved from one city to another for educational reasons increased by 16 percent. She attributes the change to the test. Previously, every university gave its own exam and students who hoped to attend had to go in person to the school to take it.

As a result, many students went to college in the same town where they grew up. Before Ye.G.E., students living outside big cities “never dared to try” to enter some of Russia’s best schools, Abankina said.

In another step to standardize education and make sure that the best students are on track for university, starting this past spring, all ninth graders had to pass an exam called the State Final Certification, or G.I.A., to continue on to the last two years of high school. Students who do not pass the exam will continue instead to vocational school.

Despite these small changes, the educational system in modern Russia does not differ much from that of the Soviet Union. Children start school around the age of seven and spend the first four grades with the same teacher and classmates.

Primary education is considered strong in the fundamentals, but after students move into secondary school, the differences between the Russian curriculum and those of schools in other countries become more obvious.

The Programme for International Student Assessment, carried out by the Organization for Economic Cooperation and Development in 2009, revealed that Russian 15-year-olds are not as capable as their counterparts in other countries at solving problems in a real-life context and reflecting on the meaning of what they read.

The results of the assessment were particularly striking because younger Russian students consistently appear near the top of international rankings. The Trends in International Mathematics and Science Study carried out in 2011 put Russian fourth and eighth graders in the top 10 in every category out of 57 countries surveyed.

Abankina said the reasons behind these results are clear. “The ability to apply what you know, to think, to conduct research and work on projects, this remains our weak spot. And we didn’t have it in Soviet schools, either.”

Looking to the future, not the past

The educational reforms that will make a clean break with the Soviet past have only just been launched, in the form of a new Law on Education, which came into force on Sept. 1.

Under the new system, which will be fully implemented across the country only by 2020, high school students will choose some subjects for in-depth study and take other subjects as electives.

Another part of the reform involves consolidating schools. The country’s demographic crisis has resulted in a lack of students in many places and between 2000 and 2011, nearly 30 percent of Russia’s schools were closed.

But Levkovets remains positive. “It’s interesting to see how the new standard will work,” Levkovets said. “If worse comes to worst, everything will stay as it is now.”