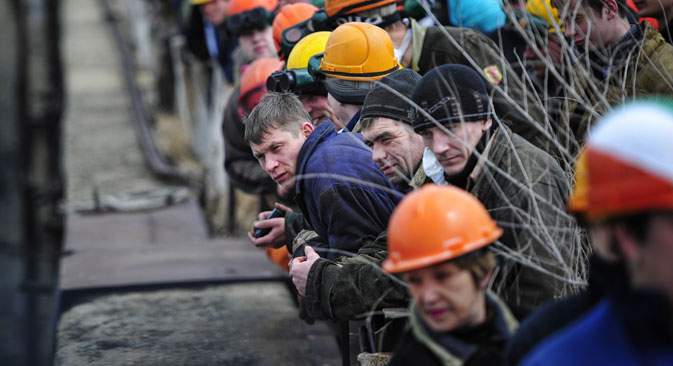 During the lifespan of the program, only 70,000 people have returned to Russia; the majority of them are low-skilled workers. Source: ITAR-TASS

This year, thanks to a program that facilitates the return of nationals to Russia, around 15,000 people have moved back to the country. The plans for the program estimated the influx of returning émigrés to be in the hundreds of thousands per year, and that the new settlers could be used to defeat the labor shortage. However, the places for living that are offered to returning émigrés do not always meet their standards.

In six years, the program conditions for providing assistance for the resettlement of former compatriots have not changed. According to the rules, they are allowed to bring along a duty-free, five-ton container with things for three family members; they are also allowed reimbursement for the cost of train tickets, and they are not charged any taxes for a one passenger car.

"The program is aimed to replenish the workforce in regions with a complex demographic situation. In reality, immigrants cannot compete on the labor market with the local population," says Natalya Pronina, who moved with her family to the Lipetsk region.

The Pronin family was lucky: There was a shortage of medical nursing staff in Lipetsk, and Natalya had worked her whole life as a nurse in Tashkent. She received assistance in arranging a job in an ambulance. Natalya was paid 40,000 rubles ($1,250), and the other members of the family (five of them) received 15,000 rubles ($470) each.

“We did not know anyone in the city, so we settled in a hotel for those resettling, for 120 rubles ($3,7) per person per day, but it was expensive and we rented an apartment," Natalya says.

The head of the family found an informal job at a furniture factory hemming sofas, even though in his former homeland he had worked as an engineer; without citizenship, no one agreed to register him for an official job.

The family spent almost all the proceeds from the sale of their house in Tashkent on food and re-establishment in the new place. “In Lipetsk, it was only possible to buy a room for this, anyway,” says Pronina.

To buy an apartment is almost unthinkable for immigrants. Thus, according to the regional Federal Migration Service (FMS) of the Lipetsk region, out of all the members of the state program, only 10 percent purchased housing at their own expense, while four percent settled in temporary accommodation centers and the rest rent apartments.

Is the West ready for the rise of the Russian elite?

The law provides for the participation of compatriots in mortgage lending, but, in three years, no family has used this right.

“Requirements are impossibly high,” says Valery Pronin. “We need to find two guarantors. But I did not know anyone in Lipetsk yet. Required is a stable and high income, but, without citizenship, the work was only informal. Permanent registration is must. Who will give it for a rented apartment?”

During the lifespan of the program, only 70,000 people have returned to Russia; the majority of them are low-skilled workers. Some have been put at a standstill by the restrictions on moving further: They are required to live in the region for two years and only then have the right to migrate to other regions of Russia.

“Otherwise, the settlers were required to return the given aid. Only a year ago it was forbidden to move to another area of the region. Not everyone wanted to stay in the countryside,” says the head of the nongovernmental organization Civic Assistance, Svetlana Gannushkina.

Some of the former citizens were refused by regional authorities — according to the terms of the program, authorities have that right.

While waiting for an answer, Yelena worked informally as a nanny. Every three months, she had to travel to Kyrgyzstan to get a stamp on the border. Foreigners from the neighboring countries can stay in Russia on a temporary visa up to three months.

"A month later, we were told that they have no right to make a choice for us, but we wrote again. After all, we're traveling as families and close all connections in Kyrgyzstan: we sell everything, we give up the previous citizenship; we must have confidence that this area will accept us for sure. After that, we were heard and were asked to write a résumé."

More: Why young Russians are leaving the country

Experts believe that immigrants would move also to "priority" areas where the climate is harsher, if there were more favorable conditions for life and work, and not only an allowance given out. However, the creation of such conditions for the "returnees" is still a matter of the future.

“In 2009, the program involved 10 new regions, and, by 2012, the number of regions had increased up to 40. This is almost a half of the country,” says the deputy head of the Department for the Implementation of the State Program of the Ministry of Regional Development, Olga Vykhovanets.

“The state program is the only comprehensive federal program in the area of migration and can serve as a model for other migration programs. As in the beginning, the countrymen of Russia were planned to be expected until 2012, but now [they] will be always welcome. Officials expect to gradually solve the accumulated problems.”